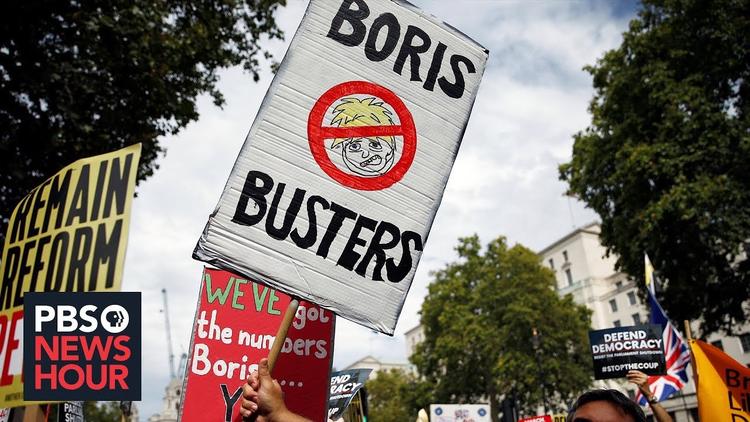 By Symon Hill ( Waging Nonviolence) – Thousands of people poured onto the streets of the United Kingdom . . . to challenge Prime Minister Boris Johnson’s plan to suspend Parliament.

Activists are used to calling on politicians to make decisions, not to take direct action. But that’s precisely what’s needed to stop Boris Johnson’s suspension of Parliament.

Seasoned activists, used to the difficulty of persuading people to turn up at demonstrations, were taken aback by how many people appeared. Some had never been to a protest before.

Journalists reported that the protests had been “organized on social media.” This is only half-true. While thousands turned up outside Parliament from late afternoon onwards, lists of planned protests elsewhere in the United Kingdom appeared on Twitter and Facebook. They were not all consistent, as people rushed to arrange resistance with almost no notice.

In some places, even social media gave way to the power of people simply turning up. In small cities such as Oxford, it was possible to just go into the city center and look for other people with “Stop the coup” written on cardboard placards. As they found each other, more people joined spontaneously and together they managed to make collective decisions about where to march. Like many such protests around the United Kingdom, it may have looked a bit amateur, but it happened less than three hours after Buckingham Palace approved the suspension of Parliament.

Meanwhile, over a million people signed a petition against the suspension. This is about 10 times the previous record for the most people in the United Kingdom to sign a petition in one day.

Nevertheless, we need more than petitions. To be effective, we need to continue to resist, to be nonviolent and to prevent particular groups or factional interests from taking over.

What we really need is for members of Parliament to refuse to leave the chamber when Parliament is suspended the week after next, and to attempt to carry on their proceedings without government approval. MPs will return from their summer recess next week, and if Johnson gets his way, they will sit for only a few days before disappearing again.

According to Johnson, Parliament will then re-open in mid-October. During this time, Johnson’s government would make key decisions on Brexit without parliamentary input or oversight, ensuring that the arrangements benefit the rich and powerful, whose interests he so unashamedly serves.

But over 100 MPs have already signed the “Church House Declaration” promising that any attempt to prevent Parliament from sitting will “be met by strong and widespread democratic resistance.”

This is encouraging, but what do they mean? One possibility is that anti-Johnson MPs would meet somewhere else and continue to act as Parliament, carrying on with their proceedings without recognition from government or monarchy. It is no coincidence that they made the declaration in Church House: This is where MPs met during the Second World War, after Parliament was bombed.

Another possibility, which would perhaps have a more immediate impact, would be for MPs to refuse to leave the House of Commons on the day.

“The police will have to remove us from the chamber,” tweeted Labour MP Clive Lewis after Johnson’s announcement, promising that he would not leave voluntarily. “Same here,” replied another Labour MP, Lloyd Russell Moyle, known for his campaigning against militarism and the arms trade. Green MP Caroline Lucas tweeted that “MPs must refuse to the leave the chamber and continue to sit as a #PeoplesParliament.”

Johnson would be forced to choose between allowing this to happen, or coping with the fallout as the world watches footage of police dragging elected politicians from their seats in what many still like to call the “Mother of Parliaments.”

But how many MPs will refuse to leave? Only a few have mentioned it explicitly. We need mass nonviolent pressure from outside Parliament to give courage to these MPs to stick to this promise, and to urge others to join them. If it is to have an effect, an MPs’ sit-in must be a real act of nonviolent resistance. Little would be achieved by two or three MPs staying for a symbolic half-hour and then wandering off.

The chances of successful nonviolent resistance lie in part on recognizing what we are up against. Many progressive activists rightly have little confidence in Parliament — but government without Parliament would be far worse. Some are already suggesting that the suspension might not really happen. However, many said that they didn’t really think Johnson would become prime minister, and later that he wouldn’t really try to suspend Parliament, and then that royal approval wouldn’t be given. All these things have happened in the last few weeks. The next two weeks could be vital in preserving the limited democracy that we have in the United Kingdom — and in building movements that can build greater democracy.

One of the problems is the way the issue is linked with Brexit. With some of the impetus for protests coming from anti-Brexit groups, it’s vital that people who voted to leave the European Union are not deterred from joining the resistance to Johnson’s coup. While there were many EU flags at Wednesday’s anti-coup protests, this risks playing into Johnson’s hands by allowing him to present himself as the champion of the 52 percent who voted for Brexit in the 2016 referendum.

It is not simply that Johnson wants Brexit. He wants a no-deal Brexit. That is, a situation in which the United Kingdom leaves the European Union without any sort of alternative arrangements in place. Laws that the U.K. observes as part of the European Union — including a long list of rules on workers’ rights and environmental protection — would not be transferred into U.K. law, trade between the U.K. and the rest of Europe would plummet and Britain would be thrown into the hands of the United States, as Trump promises trade deals that are likely to rely on Britain giving up ethical and environmental standards. It’s not hard to see why financially comfortable right-wingers are so keen on a no-deal Brexit.

The effect it would have on peace in Northern Ireland — with the likely return of a hard border between the Republic and the North — seems to be of little concern to them.

Johnson’s decision to prorogue Parliament appears to have been triggered by the news that his opponents in Parliament had finally managed to co-operate with each other. It looked like enough moderate members of Johnson’s Conservative Party might work with the opposition to push votes through Parliament preventing a no-deal Brexit or even passing a motion of no confidence in the government. Johnson has suspended Parliament so he can rule without them.

There has been lots of talk this week about the 17th century. In 1629, King Charles I ordered Parliament to dissolve. In response, radical MPs held the speaker in his chair while they passed motions critical of the king’s policies. In 1642, the king entered the House of Commons to arrest his opponents and was met with a refusal to hand them over. He fled London, and the English civil war began between king and Parliament. Charles was convicted of treason and tyranny and beheaded in 1649.

We don’t need civil wars or executions now, but we need to recapture the spirit of mass noncooperation, both inside and outside Parliament. Johnson might think that’s unlikely. So did King Charles.

Symon Hill is campaigns manager of the Peace Pledge Union, a UK-based pacifist network. He is also a history tutor for the Workers’ Educational Association. His latest book is “The Upside-Down Bible: What Jesus really said about money, sex and violence.” You can follow him on Twitter @SymonHill.