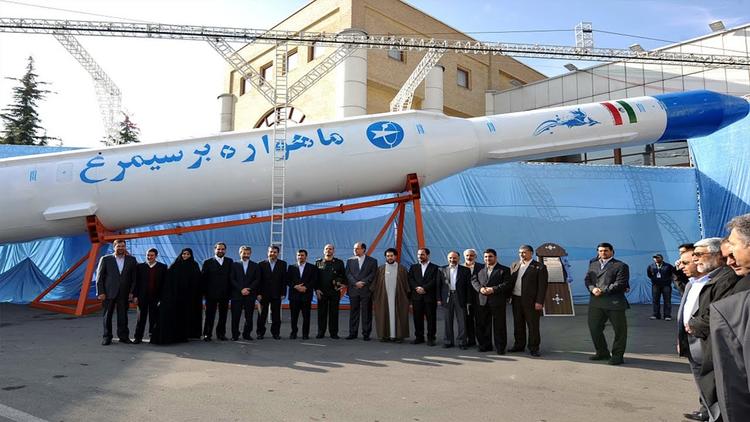 Ann Arbor (Informed Comment) – Trump couldn’t contain his inner five-year-old when an Iranian satellite launch at the Imam Khomeini Spaceport went bad last Thursday. He had to taunt Tehran on twitter, as Passant Rabie at Space.com reports. (Iranians don’t have twitter, although some high officials use it for public diplomacy overseas.) He appears to have taken, or had an aide take a smartphone picture of a classified briefing slide. The slide shows a US spy satellite photo of the site where the rocket blew up on the launch pad, along with analysts detailed comments and analysis.

The United States of America was not involved in the catastrophic accident during final launch preparations for the Safir SLV Launch at Semnan Launch Site One in Iran. I wish Iran best wishes and good luck in determining what happened at Site One. pic.twitter.com/z0iDj2L0Y3

Iran taunted back that its Nahid satellite was unharmed.

Iran has launched a number of suborbital spacecraft, some with animals (the last two with primates), which it claims to have recovered safely. In 2008 it claimed to have put a dummy satellite into orbit. Iran’s satellite program is clearly rudimentary and has few real successes. The US objects to the program on the grounds that knowledge of how to put a satellite in space would also give Iran knowledge of how to launch ballistic missiles with nuclear warheads.

As stated, this is a stupid concern, since Iran does not have, and does not have the prospect of possessing, nuclear weapons. Satellites can have many economic and health implications, and some forty countries have launched some 9,000 satellites, though many of these countries piggy-backed on some other nation’s launch capabilities (mainly Russia and the United States).

Trump’s thoughtless Tweet has the potential for revealing US intelligence sources and methods to Iranian intelligence (Persian acronym VAJA). They now know much more about how much we know about such incidents inside Iran, and how we know them, and how our analysts approach them. It may not be the end of the world, but it is what is called in American sports an unforced error– something stupid you do that makes you lose the game even when you did not have to.

It is one more in a long series of hundreds of instances in which Trump has demonstrated a penchant for damaging the national security of the United States for reasons of his own pettiness, or mental fog, or narcissism, or in some instances perhaps graft and corruption.

What is most galling of all is the double standards of the Republican Party. If Bill Clinton or Barack Obama had done something like this, There’d be four years of daily senate hearings and Fox Cable News would have to start a whole new channel to cover it 24/7 for years on end.

Trump keeps messing up in ways that have the same implication as treason, and it is not even a major story (it wan’t on the front page of google news when I checked). And let it be clear, it is big money that allows him to get away with this. A cabal of billionaires keeps their boy in power because he keeps cutting their taxes and gutting environmental and financial regulations. Billionaires buy the senators, run media like the Wall Street Journal and Fox, and set the national tone.

Democrats don’t have nearly as much money. What they have seems to make them timid about rocking the boat. What they don’t have prevents them from having a really big megaphone. It is plutocracy.
—–