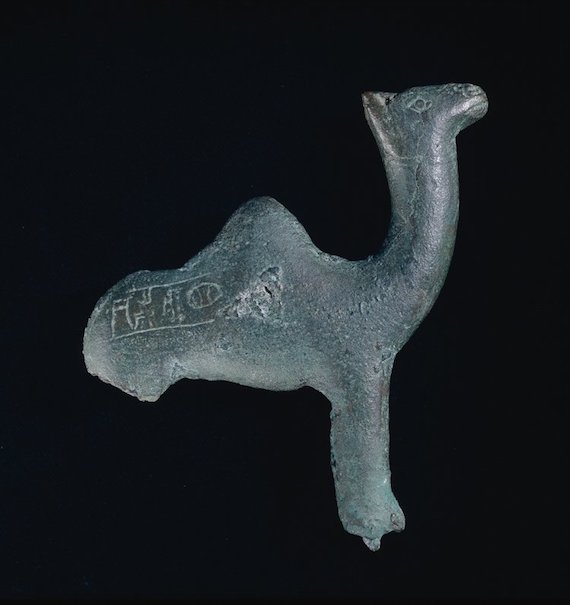 In the Qur’an, the chapter of Noah (71) contains a denunciation of the worship of a set of gods, most of which are not attested in northern and western Arabian inscriptions and the worship of which probably lapsed long before the era of the Qur’an (610-632 A.D.). One of them is Wadd, the god of love who also was a moon god and was represented as a serpent.

21Noah said, “My lord, they revolted against me, and instead lined up behind one whose affluence and progeny only led to dearth for him.

22They concocted a massive fraud,

24They have duped many. Do not increase the evildoers save in error.

25Their sins condemned them to drown, then they were cast into the inferno, and they found no one to succor them apart from God.”

Some of these gods are South Arabian. The problem is that from about 380 AD, as the great scholar Christian Robin has shown, the ruling dynasty of the Himyar kingdom in Yemen turned to monotheism, converting to Judaism or to a form of Gentile monotheism inflected by Judaism. The kings stopped supporting and building temples to the gods. Commoners may have continued for a while to worship these gods, writing dedications on wood strips, but no further monumental polytheistic inscriptions were produced by the court. The monotheistic kings of Himyar called their one God “the Merciful” (Rahmanan), which is also a major epithet for God in the Qur’an. There appears to have been substantial Yemeni influence on the Qur’an, which is natural, since Mecca is not so far from Yemen.

So the Qur’an is referencing gods that used to be worshiped in the olden days here, not cults present in Muhammad’s own Mecca. Literarily, this move makes supreme sense, since the scene is set in antediluvian times among the people of Noah, so it is natural that they were worshiping the old gods from before 380 A.D.

For more on Wadd see this tweet and the subsequent thread by Ahmad Al-Jallad:

<Part 2 – Wadd, of Tweet Mini-Series: The archaeology of the Book of Idols> “The Kalb (tribe) adopted Wadd as their god at Dūmat al-Jandal” reported Ibn Al-Kalbī. But according to the Qur’an (71:23), Wadd was one of the gods of old, worshiped before Noah’s flood. What is Wadd? pic.twitter.com/rsxf6shYei

Ancient inscriptions in the Sabaic language show that Wadd, the god of love and friendship, was called “father” by Yemenis. The Qur’an contains many denunciations of the idea that God is a father or has taken to himself children. Islam is virtually the only late antique Near Eastern religion that rejected the epithet “father” for God. This may be because pagans in Arabia took the fatherhood of God literally, just as ancient Greeks believed that Zeus fathered many (many!) children, and the Qur’an wanted people to understand that God is one, unique and spiritual.

This statuette of a camel from Yemen dated in the 200s or 100s B.C. has an inscription mentioning the god Wadd, the worship of which is denounced in that passage of the Qur’an.

The BM description is

“Cast copper alloy statuette of a one-humped camel; front and rear legs cast as one; single shallow triangular impressions from casting on the reverse in the centre of the hump and on the front above the forelegs; depicted with a halter around its neck, ending in a pair of ties hanging down the front; inscribed on the right flank with a South Arabian dedication to the god Wadd’ab; pin slightly projecting from the bottom of the foot; rear leg largely missing.”

I discuss the rise of Islam against its pagan background in my new book,

“This camel statuette is depicted with a halter around its neck and is inscribed with a short dedicatory Sabaean inscription to the god Wadd’ab (Ryckmans 1951a, 35; Ryckmans 1960a, 217). Wadd-ab means “Wadd is the father”; Wadd means ‘love’ and was an important lunar god worshipped in the Jawf, in the Marib and Sana’a regions, and in the wadi Markha (sacred to Nashshan, Kaminahu, Ma ‘in, Inabba, Saba, Ma’dhin and Awsan), whose symbol was the serpent (Calvet & Robin eds 1997a, 316; de Maigret 2002, 263).

According to the file card, the camel was from the Hadramawt where Wadd is not worshipped which suggests that this camel amulet may have belonged to Minean or Sabaean merchants. A similar example in the Staatliches Museum für Volkerkunde in Munich is inscribed with a dedication to Zalim, son of Harmat, as he has promised the lord of the sanctuary’ (Seipel 1998a, 315, no. 219). Uninscribed bronze camel statuettes are also known, including those excavated at Qaryat al-Fau (Kitchen 1998a, 152-4 and refs). Camels played a key role in transport between the South Arabian cities and longer-distance trade linking Arabia with other parts of the Near East, hence it is unsurprising to find that they were represented in this form.

This one-humped camel statuette is depicted with a halter around its neck ending in a pair of ties at the front, with its legs indicated by single castings. Shallow triangular impressions on the reverse and above the forelegs are the result of the casting; the small pin projecting from the feet would have enabled it to be secured to a base. It is inscribed on its right flank with a short dedicatory inscription to the god Waddab; a similar example in the Staatliches Museum fűr Volkerkunde in Munich is inscribed with a dedication to “Zalim, son of Harmat, as he has promised the lord of the sanctuary”. Other inscribed camel statuettes carry dedicatory inscriptions to the god Samawi, who appears to have been particularly venerated by the Amirum tribe.

Uninscribed bronze camel statuettes are also known, for instance from excavations at the site of Qaryat al-Fau in south-western Saudi Arabia, and are again often shown with a rope halter around their neck. The frequency with which camels were the subject of religious dedications underlines their importance in the Arabian economy. They were not only valued for their wool, milk and meat, but they also played a vital role in transport between the South Arabian cities and longer-distance trade linking Arabia with other parts of the Near East. During the early centuries AD in Yemen, as well in as other parts of Arabia, camels were also occasionally slaughtered and buried next to their deceased owners as a sign of status.”