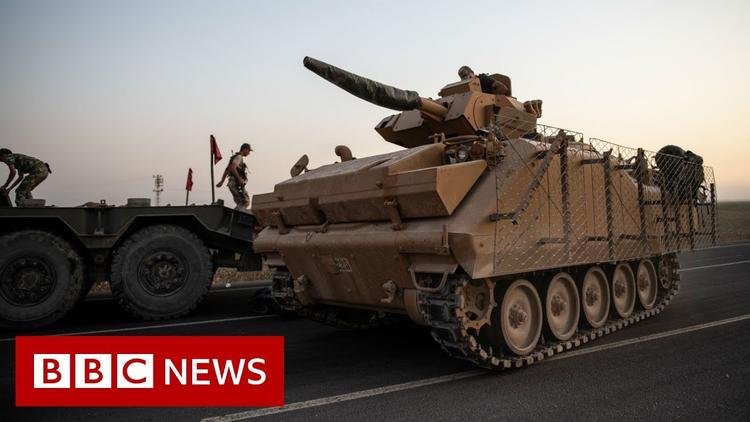 Ann Arbor (Informed Comment) – Turkey’s incursion into Syria has roiled the Middle East and NATO countries, demonstrating one key polarizing divide on both sides of the Mediterranean. That divide is between supporters of political Islam and its opponents. By political Islam I mean movements like the Muslim Brotherhood that make Islam more than a matter of private worship and belief, seeking to turn it into a political ideology that aspires to come to power and rule a country. Political Islam in the Middle East is analogous to the Christian Right in the United States.

The Turkish invasion of northeast Syria began on Wednesday, with 14 said to be killed, 8 of them civilians, in heavy Turkish aerial and artillery bombardment of 6 Kurdish towns such as Tel Abyad along a 290-mile stretch of the Syrian border with Turkey. Thousands of Kurds were said to have fled their homes, heading south away from the border. Turkey’s president Tayyip Erdogan plans to occupy a swathe 30 miles deep and to send in large numbers of Sunni Arab Syrian refugees now living in Turkey, who had fled the government of Bashar al-Assad.

Although Turkish propaganda advertises that Ankara is returning displaced Syrians to their homes, it is doing no such thing. Turkey is displacing hundreds of thousands of indigenous Kurds and then stealing their land and homes and giving them to Sunni Arab refugees who were originally from elsewhere in Syria entirely. Erdogan seeks to establish a Sunni Arab buffer zone between the Syrian Kurds and the Turkish border. To the north of the Turkish border are millions of Turkish Kurds that Erdogan suspects of having separatist tendencies, and whom he is afraid the Syrian Kurds will infect with their Bookchinite leftist ideology and strong Kurdish nationalism.

Erdogan is behaving in Syria, in other words, precisely as Iraqi dictator Saddam Hussein had behaved in the significantly Kurdish province of Kirkuk, to which he brought in large numbers of Arab settlers from elsewhere so as to dilute Kurdish political claims. In both cases authoritarian leaders used ethnic cleansing and population displacement as a political tool. Earlier in the twentieth century,

It is not generally discussed in the US press, but the Kurds Erdogan is attacking are organized by the Democratic Union Party, which upholds the ideology of Brooklyn leftist anarchist and environmentalist, Murray Bookchin.These Kurds are in the main Sunni Muslims by heritage, but have adopted a secular, collectivist form of post-communist socialism.

Erdogan, in contrast, has a soft spot for political Islam, even though he has not tried to impose it on Turkey, which has a secular constitution. He has been a supporter of the Muslim Brotherhood and of Hamas in Gaza.

The Turkish incursion was condemned by the Egyptian government, which has for five years waged war on the Egyptian Muslim Brotherhood, branding political Islam a form of terrorism. Egypt’s Yawm7 (Day 7) newspaper wrote, “The Ottoman dictator Recep Tayyip Erdogan demonstrates day after day that he loves to shed the blood of the innocent, especially of the people of Syria, inasmuch as the dictator deploys his military tools to kill and displace civilians in the north of Syria on the pretext of expelling Kurdish terrorists.”

Saudi Arabia is said also to be highly critical of the operation, and the Saudis had last summer announced that the price of their support for any group in Syria would be shunning Turkey.

I condemn the unilateral operation launched by Turkey in Syria. It puts in question the security and humanitarian efforts of the coalition against Daesh [ISIL} and risks undermining the security of Europeans. It must stop. The Security Council is seized of the issue.

France was traumatized by a wave of ISIL violence in 2015 and to this day, and the government of Emmanuel Macron just announced a redoubling of its commitment to defeating Muslim extremism

The reaction to Turkey’s incursion in the region seems to depend on how much a political actor fears a resurgence of ISIL and dislikes the Muslim Brotherhood and fears political Islam, including its mild Turkish form under Erdogan. That is what Egypt, Saudi Arabia and France have in common. Otherwise, none of them has a brief for Kurdish nationalism or for the political ideas of Murray Bookchin.