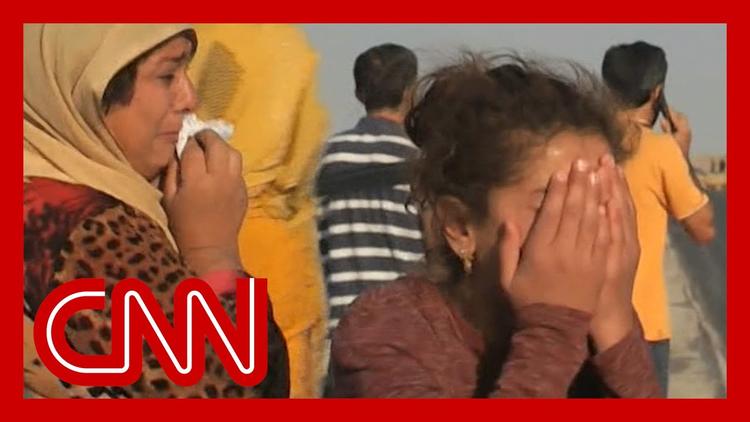 Ann Arbor (Informed Comment) – For us oldsters, one of the iconic photographs of the twentieth century was the last US military helicopter taking off from the roof of the US embassy in Saigon, with desperate people hanging off it, fearful of what would happen to them when they fell into the hands of the victorious Viet Cong.

It happened on the watch of president Gerald Ford, though it was really Dick Nixon who negotiated a US defeat in Vietnam in 1972, after which the US began withdrawing. Ford nevertheless suffered some public opprobrium, and the debacle may have helped Jimmy Carter defeat him the following year.

Embed from Getty Images
Evacuation of Saigon
A CIA employee (probably O.B. Harnage) helps Vietnamese evacuees onto an Air America helicopter from the top of 22 Gia Long Street, a half mile from the U.S. Embassy. h/t Getty Images.

In Syria, this is Trump’s Saigon Moment. All US special forces personnel are being withdrawn from Syria after Turkish artillery targeted some of their bases to force them back from the border, and after Turkey cut off their supply lines. At the same time, Syrian Arab Army troops are advancing on the Kurdish northeast of Syria, raising the danger of US troops getting caught in the crossfire. A thousand such troops are too few even to defend themselves, and although no one is saying so, I suspect they also fear the anger of their betrayed allies, the People’s Protection Units or YPG, among whom they have been embedded, but whom Trump has now turned over to Turkish president Tayyip Erdogan’s abattoir.

Ironically, the troops will evacuate to Turkey, presumably to Incirlik Air Force Base, which the US leases. Although the US military is hoping for an orderly retreat and successful deconfliction with Turkey’s military, the shadow of danger has fallen over US troops in the chaos of the fall of the Kurdish mini-state. Not since 1975 have they had to rush for the exits in quite this ignominious a fashion, and it is said that they are angry about it, especially about the US betrayal of the Kurds who bravely fought alongside them against ISIL.

As the US withdraws, Bashar al-Assad’s Syrian Arab Army is coming in. The YPG Kurds have already turned their checkpoints in east Aleppo over to the SAA, according to some reports.

Likewise, the YPG in the enclave of Kobani (Ayn al-Arab) have invited the Russians and the regime in, and they were expected to arrive Sunday evening.

It may seem like a long time ago, but Kobani was besieged by ISIL in September, 2014, and the dire character of their circumstances convinced the Obama administration to intervene for them from the air, a step toward deeper US involvement in Syria.

That partnership with the Kurds in pushing back ISIL, the cult of terror, is now over, as dozens of high-value ISIL captives have escaped in the chaos of the Turkish invasion.

Instead, the Kurds are appealing to Russia to mediate for them with the Syrian Baathist regime, a notoriously cruel and vindictive one-party state that sees the Kurds’ alliance with the US 2014-2019 as having been treasonous, as Al-Jazeera points out. The regime has tortured 10,000 dissidents to death, and even if its Syrian Arab Army troops do come in to frustrate the Turkish advance, they will almost certainly start rounding up Kurdish leaders of the autonomous Kurdish region.

Other Syrian Arab Army units are heading toward the northeast region called the Jazira.