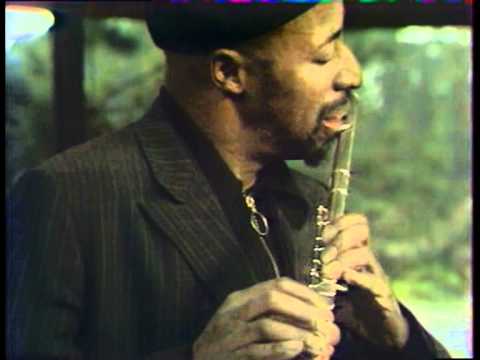 “I want my music to awaken something that’s already in your heart.”

(Informed Comment) – Among the hundred-plus African-American jazz musicians who embraced Islam in the mid-Twentieth Century, Yusuf Lateef, whose given name was William Huddleston, emerged as the elder statesman and spokesman of the group. One of the reasons was his remarkable longevity. Another was the wide range of his creativity, which included composition, performance, teaching and writing.

Lateef lived from 1920 to 2013, and he was active as a performing musician and teacher from the age of eighteen until the last few months of his life. In April of 2013, eight months before his death, Lateef performed at a concert in his honor, “Celebrating 75 years in music.” At that concert in Brooklyn he played the saxophone with a wide variety of musicians, and he presented the premieres of two new compositions.

Three decades before that tribute, Lateef had eschewed the use of the word “jazz.” In 2008 he told an interviewer that he had relinquished the term jazz some thirty years earlier. “I still play that form of music,” he said, “but I feel that the word is a misnomer . . . It has meanings and connotations that debase the art and belittle those who play it . . . If you look up the word “jazz,” you’ll see that its synonyms include ‘nonsense,’ blather,’ ‘claptrap,’ and other definitions that reduce the music to poppycock and skullduggery.”

Similarly, Lateef wanted to distance jazz from its ties to drinking and the use of drugs. In 1980, he announced that he would no longer perform in places where alcohol was served. He said that, “Too much blood, sweat and tears have been spilled creating this music to play it where people are smoking, drinking and talking.”

Despite his discomfort with term ‘jazz’ and the venues in which it was most often performed, Lateef continued performing and composing, and his stature as a jazz musician grew over the ensuing decades. In 2010, at the age of ninety, Lateef was awarded the Jazz Master Fellowship Award by the National Endowment for the Arts. But Lateef’s artistic accomplishments were not limited to music. He was an accomplished university teacher and fiction writer. Among his books are two novels, and an autobiography, The Gentle Giant.

Lateef wrote and spoke eloquently about his path to Islam and his conversion to that religion. In 2008, sixty years after that conversion, he told an interviewer that, “In 1948 I embraced Islam through the Ahmadiyya Muslim Community movement – which is guided by a Khalifa, a spiritual leader. After my conversion, I found myself striving for a spiritual development, and I still am.” Lateef explained how he choose the name Yusef Abdul Lateef. “Lateef means gentle and amiable, and Yusef means Joseph, after the prophet Joseph. And Abdul Lateef means a servant of the gentle and amiable, a servant of God, and I said, ‘that’s something for me to try to live up to.’”

In the early 1950s, Lateef’s career as a saxophonist blossomed. He was invited to join Dizzy Gillespie’s band and toured widely with that popular ensemble. At the same time, Lateef immersed himself in the study of Islam in general, and in the study of Sufism (Islamic mysticism) in particular. And it was in the writings of the Twentieth Century Sufi master Inayat Khan, that Lateef found a powerful link between musical expression and religious devotion.

In “The mysticism of Music, Sound, and Word” Inayat Khan wrote that “The true use of music is to become musical in one’s thoughts, words, and actions. One should be able to give the harmony for which the soul yearns and longs for every moment.” Lateef shared his religious ideas with many of his jazz contemporaries, Dizzy Gillespie, and John Coltrane among them.

Some musicians of Lateef’s generation, McCoy Tyner and Art Blakey among them, converted to Islam but later drifted away from active practice and participation in religious life. In contrast, Yusuf Lateef remained a strict practitioner, of Islamic rituals, praying five times a day, and fasting during Ramadan, and, on two occasions, making the Haj, the pilgrimage to Mecca. From 1987 to 2002 Yusef Lateef taught at Five College Consortium in Western Massachusetts, where he was a Professor of Music and Music Education. When he retired, at age eighty-two in 2002, he was asked what he would miss the most about teaching. His answer: watching his students develop. “It’s like watching a flower grow. I tell them to have an open mind – to explore all the possibilities of life.”