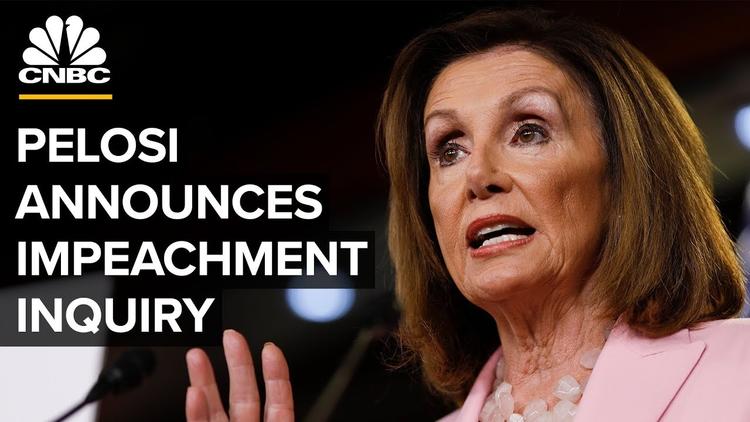 (Yes! Magazine) – It’s official: The U.S. House of Representatives, led by Speaker Nancy Pelosi, is moving toward impeaching President Trump. In announcing this, Pelosi finally did what many on the left thought should have been a no-brainer. Her reluctance to move the process along has been frustrating for many eager to try to stop Trump’s trampling on the rule of law.

The actual announcement doesn’t mean much in terms of how Congress operates. It only provides a semantic umbrella under which we can now group the numerous investigations of President Trump’s behavior already underway. (U.S. House Judiciary Chairman Jerrold Nadler said in July that his committee was already conducting an impeachment investigation.)

The announcement crystallizes the probable endgame, when the Democrat-controlled House votes on articles of impeachment, and the Republican Senate prevents Trump from being removed from office, just as we head into an election year. If nothing else, Pelosi’s announcement shows that she is now prepared for that outcome.

In a brief announcement Tuesday, Pelosi cited Trump’s betrayal of his oath of office, of national security, and of the integrity of our elections. The kicker was the revelation this past week that Trump was blocking the release, mandated by law, of a whistleblower complaint, which presumably relates to his withholding military aid to Ukraine until the new president of that nation investigated the son of former Vice President Joe Biden.

Trump’s malfeasance has been abundantly clear since the day Trump took office, but with momentum building (half the House of Representatives now favors impeachment), the dam broke with this obvious shakedown attempt. Trump’s latest offense removed any remaining political cover the Democrats had for not pursuing impeachment.

But where will this get us?

As Pelosi said, “The president must be held accountable, no one is above the law.” And it is true that the formal impeachment process will allow the House to tap into a wide variety of investigative powers, to obtain more documentation and testimony. But let’s be real here: We already have more than enough in the public record to impeach Trump six times over. Anyone else would be under federal indictment for multiple crimes, and only an internal Justice Department memo—not any law—has prevented that.

But there’s also a good moral argument for impeachment: If this latest conduct isn’t impeachable, what is? Would we wait until Trump literally shot someone on Fifth Avenue? There, in fact, does have to be a line that cannot be crossed, or else we’re no longer living in a nation governed by laws.

The politics of the issue matter, too. For one, launching an impeachment inquiry makes the Democrats stop looking like pussycats in their refusal to stand up to Trump. But more important, impeaching Trump in a Democrat-controlled House ultimately throws the issue to the Republicans in the Senate, where they will be forced to confront it. Several Republican senators facing tough reelection races, or who are retiring and thinking in terms of their legacies, are going to have to weigh what’s likely to be the most important vote of their careers very carefully. And if Senate Majority Leader Mitch McConnell does what he did with Barack Obama’s nomination of Merrick Garland to the Supreme Court, and simply refuses to let impeachment come to the floor, he’ll own that too.

But this could all go away if the American people don’t rally.

The Resistance (or rather, the #Resistance), for all its early fervor, has been rather disjointed and moribund since shortly after Trump’s inauguration. Some early successes—stopping the early iterations of Trump’s Muslim ban, for example, or the 35-day government shutdown that ended when nearly half the nation’s air traffic controllers called in sick—were followed by months of little more than a few demonstrations, but no meaningful change. Several months ago, there was constant social media organizing with promises to march on Washington if Trump tried to stop Special Counsel Robert Mueller’s investigation. But that all petered out when Trump’s obstruction of the probe proved to be a bit more sophisticated than just firing Mueller would have shown.

The only safeguard of a democracy against a lawless president and corrupted government institutions is the people.

Conventional and popular wisdom also suggested that the administration’s cruelty toward migrant children would provide a rallying point for a broad-based action against the administration, but that movement has also lost momentum after it became clear that Trump had no intention of stopping the family separations, or reuniting those families that already had been separated by borders. A court ruling in favor of the administration, forcing migrants to claim asylum in Mexico first, has only ensured that the families are remaining together in a country ill-equipped to provide for them.

If you look at successful mass movements throughout history, they share one central characteristic: Specific goals are clearly articulated. Today, protesters in Hong Kong have already achieved one of their key demands, when the territory’s leadership withdrew a bill that would allow Hong Kongers accused of certain crimes to be extradited to mainland China for trial. Organized protesters in 1989 looking to bring down the Iron Curtain forced their governments to do so and hold new elections.

In today’s United States, the lack of a focused, cohesive opposition has created a situation in which Trump and his supporters have had a free hand to shape the narrative surrounding his actions. Even with an impeachment forthcoming, the Democrats’ approach can best be described as “procedural” and “without fireworks.” Democrats are still playing the game by the rules we’ve had for the past 200 years.

Fireworks are what we need right now. The Trump administration is on the defense. They’re fighting in courts to prevent even more bad behavior from being exposed, they’re using every trick in the book (and making up new ones) to claim freedom from any oversight, and they’re taking a heavy-handed and sometimes illegal approach to get their way, such as this latest attempt to subvert the 2020 election with foreign help.

The people will need to vote Trump out in 2020 to ensure he’s gone, but at this rate, he may well try to cancel the presidential election outright, and he’ll certainly never concede defeat. He’s already demonstrated his utter contempt for the rule of law, and shown he’d rather surround himself with servile toadies and rule by fiat than try to govern within a democratic system.

What’s going to stop him? Certainly not the law or the Department of Justice, which is now led by the man who squelched the investigations into Trump’s secret deals with Russia (and also helped cover up the Iran-Contra scandal in 1992, for the record). And certainly not the Supreme Court, run by a right-wing faction of which at least one member clearly sees his role as a political operative rather than an unbiased arbiter of justice.

The only safeguard of a democracy against a lawless president and corrupted government institutions is the people. But the people need to be willing to step forward and defend it.

When Pelosi announced the commencement of impeachment proceedings, she quoted Benjamin Franklin’s famous line about the form of government the new nation would have: “A republic, if you can keep it.”

Pelosi implied it was now Congress’s job to do so. But ultimately, it’s ours.

Chris Winters wrote this article for YES! Magazine. Chris is a senior editor at YES! He covers economics and politics. Follow him on Twitter @TheChrisWinters.