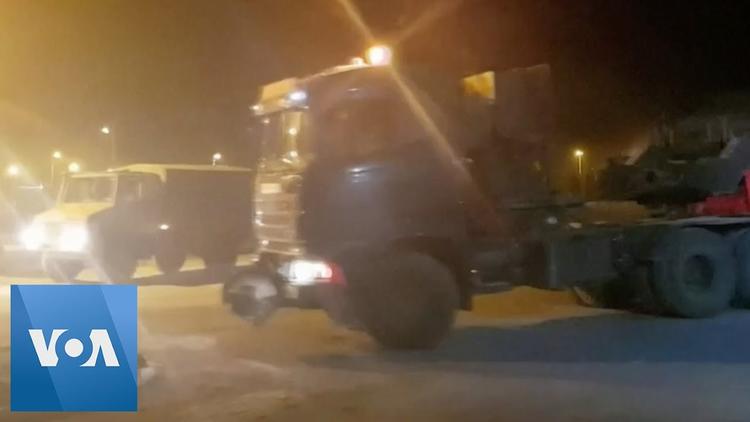 Ann Arbor (Informed Comment) – Last week during the visit of the Finnish president, Trump acted out with a journalist, James Mason of Reuters who asked him a simple question. What exactly did Trump want from Ukraine president Volodymyr Zelensky during the notorious July telephone call? Trump did a bad de Niro impression, asking him, “You talking to me?” And then he browbeat the poor man going on about how bad the press is.

Trump likes to play imaginary gangsters, likes to talk tough, likes to praise and kowtow before strongmen. But in the real world he is a milquetoast, letting other countries walk all over the United States.

White House aides have apparently spent two and a half years squirming at how Trump grovels before foreign strongmen like Vladimir Putin on the telephone.

Another case in point. The White House itself is now announcing that Turkey is planning to invade the Kurdish-majority region of northern Syria to establish what Ankara calls a “security zone.” This is actually a plan for a monstrous sort of ethnic cleansing and population displacement, as Reese Erlich reported from Istanbul in a syndicated column carried here by Informed Comment.

Trump clearly has signed off on this plan, apparently afraid to take Erdogan on.

Look, I am all for the U.S. getting out of Syria. But it should be done in a way that ISIL doesn’t come roaring back and the Kurds who came to the defense of US interests aren’t hung out to dry. The US is an extremely wealthy and powerful player, and could make those arrangements if it wanted to.

Trump doesn’t want to. He refused even to provide reconstruction aid to eastern Syria so as to ensure that people in the region did not turn back to ISIL out of desperation.

Trump is the biggest disaster to hit US security since Benedict Arnold.

Why does it matter to the United States? In 2015, when Washington was looking around for someone to fight ISIL on the ground while the U.S. gave close air support, only one Middle Eastern player stepped up. It wasn’t Israel, which talks a good game about helping US security but has been almost entirely useless in every US-Mideast conflict since the Iran-Iraq War. It wasn’t Turkey, which is a NATO member and which, you know, you might expect to be at least a little afraid of a terrorist cult on its borders, which pulled off several major bombings inside Turkey. But no. It wasn’t Saudi Arabia, which was bogged down in its Yemen quagmire.

The only group that heeded the call was the Kurds of northern Syria, who are the ones who defeated the maniacal ISIL in eastern Syria, with US air support and with the tactical and strategic advice of 2,000 US special forcess personnel embedded among them.

This solution, fixed upon by Barack Obama and then SecDef Ash Carter, proved extremely effective, and in 2017 Trump and his then SecDef James Mattis just continued the policy, so that the ISIL capital of Raqqa fell to the Kurds.

But Turkey’s center-right pro-Islam government is terrified of the Syrian Kurds and their Democratic Union Party (DUP), with its “People’s Protection Units” (YPG) paramilitary. Turkey sees the DUP as no different from the terrorist group, the Kurdistan Workers Party (PKK). In fact, the Syrian Democratic Union Party does not have a reporting line to the PKK and is a tub on its own bottom. While Washington considers the PKK to be a terrorist group that has attacked Turkish (i.e. NATO) security personnel, the US does not view the Syrian Kurds in at all the same light. Both Kurdish organizations are post-communist collectivist organizations, and the anarchist secular left is about as contrary to Erdogan’s ideology of Malls-and-Islam as you could get.

But even more important, eastern Turkey is heavily Kurdish. Ethnic Kurds form about 20% of the Turkish population, and for all of its existence the modern Turkish Republic has feared Kurdish separatism and the loss of eastern Anatolia. Ankara is afraid that a powerful, armed, organized, U.S.-backed Democratic Union Party will encourage Turkish Kurds toward separatism and left politics. (At the moment many conservative Turkish Kurds vote for Turkish President Tayyip Erdogan’s Justice and Development Party [AKP]).

So Erdogan’s solution is to invade Syrian Kurdish territory and drive the Kurds away from the Turkish border, and then to settle in their villages and homes some of the 2.5 million Arab Muslim refugees currently displaced to Turkey by the Syrian civil war.

Turkey has already carried out a miniature version of this plan in the formerly Kurdish canton of Afrin, which it invaded in early 2018, and from which it expelled tens of thousands of Kurds, bringing in Syrian Arab Muslim refugees who had been in Turkey.

The difference is that Turkey now plans to go east of the Euphrates, into an American sphere of influence.

Although Trump tried to get out of Syria entirely and let the chips fall where they may, his cabinet convinced him to keep a couple hundred special ops forces in Kurdish Syria. Is Turkey going to shoot and displace them, too?

So the U.S. used the Kurds and will now meekly turn them over to the tender mercies of Mr. Erdogan. Will the Green Berets and Navy Seals have to flee with their tails between their legs?

So of course Mr. Tough Guy Trump has something to say about all this, right?

Never has the United States had a more cowardly president, or one who could not be bothered actually to pursue a coherent foreign policy. A real strongman, not a pretend de Niro, is about to kick Trump’s butt.