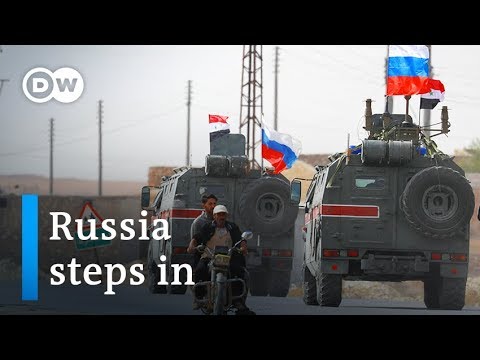 When the Syrian military withdrew from the Kurdish populated regions of Syria in July 2012, they left the Kurds in charge of their homeland, what they call Rojava. Without a backer and surrounded by many hostile states and militia, few people gave the Kurds any chance of survival.

Despite the odds stacked against them, the Kurdish forces managed to push back the attacks by Islamic State (IS) and other jihadist militias and emerged as the most effective ground force against IS in Syria. The support the Kurdish-led Syrian Democratic Forces received from the US and the anti-IS coalition allowed them to expand the areas under their control and build a coalition with other ethnic groups in northeast Syria.

That momentum was lost when US president Donald Trump abruptly declared his intention to withdraw American soldiers from Syria in December 2018. Although that withdrawal was delayed, since then, the long-term fate of the entity the Kurds call the Autonomous Administration of North-East Syria (NES) has been left in the balance, without a clear future strategy in sight.

Despite their battlefield sacrifices in the war against IS, the ongoing Turkish military operation in northeastern Syria has now pushed the Kurds into a corner. They have been left to choose between accepting the authority of Bashar al-Assad or facing a full-scale invasion by Turkey of the territory they control. They chose a deal with Assad.

The Turkish army, supported by its Syrian proxies, the Turkish-backed Free Syria Army (TFSA), started a large-scale air and ground military operation on October 9 against the NES. The green light for the operation had been secured a few days earlier when Trump told his Turkish counterpart Recep Tayyip Erdoğan that US troops would be withdrawn from the border.

So far, intensive air strikes and artillery fire followed by a ground invasion have targeted the border cities of Tell Abyad and Ras al-Ayn. Turkish troops and TFSA militias have managed to enter these cities but are yet to fully capture them. Their stated aim is to capture the area between the two cities and create a 30-kilometre “safe zone” along it.

Turkish air strikes and artillery fire have also targeted villages in the district of Kobani – which became the symbol of Kurdish resistance against IS at the end of 2014 – and the city of Qamishli. Turkish attacks have so far led to the displacement of more than 130,000 civilians. Infrastructure critical to civilian survival, such as water stations and pumps, electricity networks and hospitals have been hit.

Civilian casualties have been mounting since the operation began and several civilians were reportedly executed on October 12 by the TFSA groups, including a Kurdish politician, secretary-general of the Future Syria Party, Hevrin Khalaf.

How the world sees the Kurds

Turkey accuses the SDF of links with the Kurdistan Workers’ Party (PKK), which has been fighting an insurgency against Turkey since 1984 for the recognition of Kurdish rights in Turkey. Turkey fears the consolidation of Kurdish-led autonomy as a threat to its interests and security. Preventing the Kurds from establishing themselves as an important actor in Syria has become a key objective of Turkey’s foreign policy. Erdoğan also hopes to displace the native Kurdish population of the region by settling the 2m Syrian refugees Turkey hosts in their place.

Across the region, the Kurdish ascendancy in Syria had generated deep anxiety. Alongside Turkey, Iran also saw the Kurds as a barrier to its ambitions to extend its political influence in the region. The presence of US forces and the Kurds’ co-operation with the anti-IS coalition has also been a key concern for Iran. However, Iran has not been as vocal as Turkey in its opposition to the Kurds in Syria and and condemned the Turkish invasion.

The international community overwhelmingly opposes the Turkish invasion and sees the military action as motivated by Turkey’s ulterior motive to dominate the region. Only a handful of states declared their support for Turkey, including Turkey’s close ally Qatar, Azerbaijan and Somalia.

On October 14, the US announced a list of sanctions on Turkey in retaliation for its operation against the Kurds. It is preparing to send a high-level delegation to Ankara, headed by US vice president Mike Pence, to broker a ceasefire – although Erdoğan rejected US calls for one.

With the Turkish invasion underway, the US decision to withdraw all its military forces from northeast Syria on October 13 prompted a military agreement between the Syrian regime and the SDF.

Syrian soldiers are now moving back into territory controlled by the SDF and the US soldiers such as Manbij. Russia, a key ally of Assad which has forces on the ground in Syria, said it would try to prevent clashes between Turkish and Syrian troops.

Kurdish sources said the agreement with the Syrian government would see the Syrian military stationed along the border with Turkey to deter a wider Turkish invasion. According to officials of the Autonomous Administration, institutions such as the local councils, educational institutions and police force that the Kurds have built up since 2012, will continue to operate for the time being, but they are expected to be incorporated into Syrian state structures in the longer term.

The finer details of the agreement are yet to be worked out, but some level of Kurdish autonomy is expected to be retained as part of the post-conflict political settlement. Still, the core Kurdish demands for extensive autonomy within a decentralised federal state in Syria and the preservation of the SDF as an independent military force are unlikely to be realised. But the Kurds will feel a sense of success if their agreement with Syria prevents a wider Turkish invasion and displacement of the Kurdish population.

The Kurdish position had already weakened after Trump’s decision in December 2018 to withdraw troops. His abrupt and impulsive decision signalled that the US was unlikely to lend its support for efforts to secure a legally recognised status for the Kurdish-led administration within Syria. This changed the dynamics on the ground for the Kurds and weakened their bargaining position.

Russia and the Assad government knew that rather than make a deal with the Kurdish-led administration, they could wait until favourable conditions forced it to settle for far less than it would if it had US support.

The US withdrawal from Syria leaves Russia as the main power broker. With a Turkish invasion in full swing, the Kurds were left with little choice but to accept the terms offered by Russia.