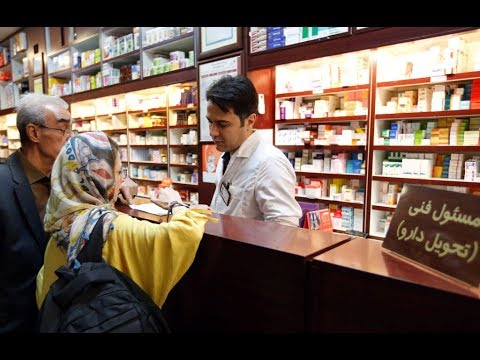 (Human Rights Watch) – The Trump administration’s broad sanctions on Iran have drastically constrained the ability of the country to finance humanitarian imports.

(Washington, DC) – The Trump administration’s broad sanctions on Iran have drastically constrained the ability of the country to finance humanitarian imports, including medicines, causing serious hardships for ordinary Iranians and threatening their right to health, Human Rights Watch said in a report released today. The administration in Washington should take immediate steps to ensure a viable channel exists for trade of humanitarian goods with Iran.

The 47-page report, “‘Maximum Pressure’: US Economic Sanctions Harm Iranians’ Right to Health,” documents how broad restrictions on financial transactions, coupled with aggressive rhetoric from United States officials, have drastically constrained the ability of Iranian entities to finance humanitarian imports, including vital medicines and medical equipment. While the US government has built exemptions for humanitarian imports into its sanctions regime, Human Rights Watch found that in practice these exemptions have failed to offset the strong reluctance of US and European companies and banks to risk incurring sanctions and legal action by exporting or financing exempted humanitarian goods. The result has been to deny Iranians access to essential medicines and to impair their right to health. Under international law, the US should monitor the impact of its sanctions on Iranians’ rights and address any violations sanctions cause.

“Trump administration officials claim they stand with the Iranian people, but the overbroad and burdensome US sanctions regime is harming Iranians’ right to health, including access to life-saving medicines,” said Sarah Leah Whitson, Middle East director at Human Rights Watch. “The comprehensive web of US sanctions has led banks and companies to pull back from humanitarian trade with Iran, leaving Iranians who have rare or complicated diseases unable to get the medicine and treatment they require.”

Between November 2018 and October 2019, Human Rights Watch interviewed 21 people, including Iranian medical professionals, former or current employees of Iranian and international pharmaceutical importers of medicines, and lawyers and NGO workers with firsthand knowledge of the challenges of humanitarian operations in Iran. Some of the interviewees live in Iran, and many of those interviewed either previously lived in Iran and/or continue to travel to Iran but reside outside the country. Human Rights Watch interviewed US government policy experts with direct or indirect experience of working on Iran issues. A Human Rights Watch researcher also corresponded with several Iranians who had commented on social media about the inaccessibility of needed medicine for themselves or their family members. Human Rights Watch relied on available Iranian and US government official statements and analyzed economic and trade data produced by Iran’s Central Bank, Iran’s Food and Drug Administration (Sazman-e-Ghaza-va-Daroo), and Eurostat, the statistical office of the European Union based in Luxembourg.

Since the Trump administration formally withdrew the US from the international nuclear agreement with Iran in May 2018, it has re-imposed previously suspended nuclear related economic sanctions, including on oil exports, and added new sanctions. The US Treasury Department predicted the sanctions would lead to Iran’s “mounting financial isolation and economic stagnation.” Open-ended and comprehensive sanctions such as those that the Trump administration has imposed on Iran have negatively impacted the humanitarian needs and the enjoyment of the right to health for millions of Iranians, Human Rights Watch said.

On October 25, 2019, with the announcement of new sanctions on Iran, Treasury Secretary Steven T. Mnuchin said that “This administration remains committed to the unfettered flow of humanitarian aid to the Iranian people, who have suffered for forty years under the mismanagement of this corrupt regime.” However, US officials also have sent a contradictory message, saying that the strategy is in fact to cause enough distress for the Iranian people that they force the government to change its behavior – a recipe for infringing on Iranians’ economic rights. On February 14, 2019, US Secretary of State Mike Pompeo told CBS News: “Things are much worse for the Iranian people [with the US sanctions], and we are convinced that will lead the Iranian people to rise up and change the behavior of the regime.”

“The recent US Treasury and State Department announcement of a ‘new humanitarian mechanism’ for trade with Iran is a rare implicit acknowledgement that broad US sanctions on Iran have restricted the flow of humanitarian goods into the country,” Whitson said. “The US government should get serious about addressing the harm resulting from its cruel sanctions regime by creating a viable financial channel with reasonable requirements for companies, banks, and groups to provide humanitarian goods for people in Iran instead of requiring more burdensome hurdles.”

The October 25 designation of Iran as a “jurisdiction of primary money laundering concern under Section 311 of the USA PATRIOT Act,” constitutes an escalation of US financial sanctions against Iran. It includes a new mechanism to “increase transparency of permissible trade” with Iran. There is serious concern that complying with the burdensome requirements of the new mechanism will not be feasible for companies. It is also unclear whether compliance will supersede the prohibition on any trade, including humanitarian trade, with designated entities under terrorism provisions. As one former US official involved in Iran sanctions policy put it: “I suspect most will see this mechanism less as a humanitarian channel and more as an intelligence gathering function to enable additional US sanctions. For those of us seeking a real channel, this ain’t it.”

Human Rights Watch found that US economic sanctions on Iran, despite the humanitarian exemptions, are causing unnecessary suffering to Iranian citizens afflicted with a range of diseases and medical conditions. Some of the worst affected are Iranians who have rare diseases and/or conditions that require specialized treatment and are unable to acquire previously available medicines or supplies. This includes patients with leukemia, epidermolysis bullosa (EB, a type of disease that causes fragile, blistering skin), epilepsy, and chronic eye injuries from exposure to chemical weapons during the Iran-Iraq war.

People with severe forms of EB have been unable to get specialized bandages and are significantly more likely to get bacterial infections and develop sepsis. Children with epilepsy resistant to common treatments and unable to get imported medicines have frequent, uncontrolled seizures that risk injury and over time severe and permanent brain damage.

Over the past year, the US Treasury Department has added a large number of institutions, including Iranian government and private banks, to the Specially Designated Nationals and Blocked Persons List for the sanctions. US and non-US companies and financial institutions that engage in transactions with these entities can be prosecuted in the US. The serious regulatory and due diligence requirements placed on international firms trading with Iran have left only a small number of companies and banks with the capacity to finance trade with Iran and a willingness to accept the increased financial and legal risks.

The Trump administration’s broad use of “terrorist” designations further threatens humanitarian trade with Iran. The April designation of the Islamic Revolutionary Guard Corps, part of Iran’s military force, as a Foreign Terrorist Organization, could affect up to 11 million Iranians, the New York Times reported. While these designations do not apply to medicines, they increase the potential risks for companies if they end up in transactions with designated entities. Moreover, the September 20 decision to impose further sanctions on Iran’s Central Bank severely restricts the last remaining Iranian financial institution able to engage in foreign exchange transactions involving humanitarian imports, rendering the “humanitarian exemption” nearly meaningless.

“We have now, for a full year, tried to find banks that are able and willing to transfer money from donors [for our humanitarian operations],” Jan Egeland, secretary general of the Norwegian Refugee Council, which supports thousands of Afghan refugees in Iran, said in August. “But we are hitting a brick wall on every side. Norwegian and other international banks are afraid of US sanctions to transfer the money that governments have given for our vital aid work.”

The US government should work to establish viable financial channels for humanitarian trade with Iran and take immediate steps to ensure that humanitarian exemptions are effective in facilitating Iranians’ access to medicine and medical equipment, Human Rights Watch said.

“Ordinary Iranians are bearing the brunt of America’s sanctions policy, and their hearts and minds will be keeping tabs on the parties that are causing them harm,” Whitson said.

While sanctions diminish Iran’s capacity to meet the needs of residents, they do not take away Iran’s human rights obligations. The Iranian government should ensure that citizens and residents can enjoy their right to health without discrimination and should take all possible measures to reduce the negative impact of sanctions on vulnerable groups. This includes the government’s obligation to prevent corruption and misuse of resources.