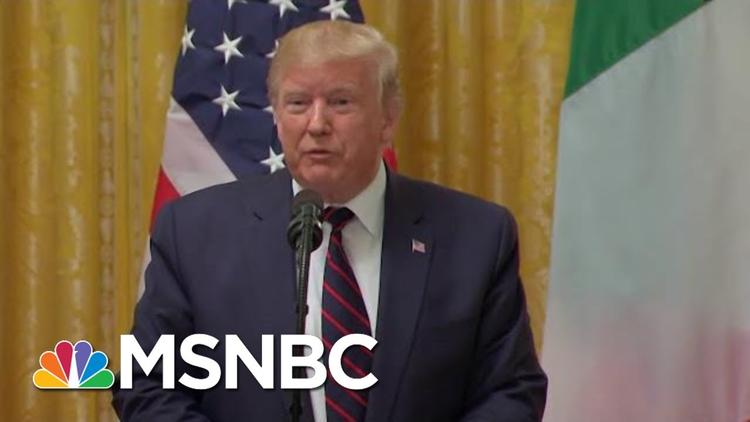 In less than two weeks, President Donald Trump has managed to create a massive and avoidable crisis in Syria.

By greenlighting the Turkish invasion of northern Syria, Trump’s policy forced more than 160,000 Syrians to flee their homes. And guess who emerged as the political and military winners? Russia, Iran, and the Syrian government of Bashar al-Assad.

High-ranking Republicans, including usual Trump defenders Senate Majority Leader Mitch McConnell of Kentucky and Senator Lindsay Graham of South Carolina, slammed the decision. A bipartisan majority in the House of Representatives, including two-thirds of Republicans, also condemned the move. Chaos on the battlefield and recriminations at home: This is what a declining empire looks like.

The move is also being criticized by John Craig, special assistant to the President under George W. Bush, who told me in an interview that there was a clear alternative to Trump’s reckless moves. Instead of abandoning the Kurds, he could have clearly warned Turkish President Recep Tayyip Erdoğan not to invade.

“I would have advised President don’t give an inch,” Craig says in a phone interview. “Tell Erdoğan ‘don’t move across the border.’ ”

Instead, Trump bumbled his way into an international crisis.

It began October 6 with a phone call between Trump and Erdoğan. Turkey’s president convinced Trump to pull back US troops based in northern Syria so Turkey could launch an invasion. Once again, The Donald, trusting his “gut,” made a spur-of-the-moment decision.

Three days later, Erdoğan sent troops across the border to attack the Syrian Democratic Forces (SDF), the mostly Kurdish group that had allied with Washington to fight the Islamic State. Outgunned by the Turkish army and abandoned by Trump, the SDF made a quickie deal with the Syrian and Russian governments to jointly block the Turkish offensive.

Syrian army troops quickly deployed to several important cities near the border with Turkey. Russian military police began patrolling the strategically located town of Manbij. Turkey’s proxy militia will fight for control of Manbij, Erdoğan says, but it’s unclear if it will risk a clash with Syria or Russia.

On October 17, Vice President Mike Pence and Erdogan announced a five-day “ceasefire,” during which Kurdish forces would withdraw from an area designated by Turkey. But the Kurds were not part of the negotiations, and as of press time, it seems unlikely they will pull back their fighters.

What could have been done?

It doesn’t take an advanced degree or years in the State Department to see an alternative to Trump’s dump on the Kurds. Trump could have set a date for a US withdrawal with clear warnings to Turkey. The US would have had overwhelming support in the United Nations, which has the power to impose harsh diplomatic and economic sanctions on Turkey. A genuine multi-national effort would have deterred aggression or made Turkey pay a very high cost.

Instead, Trump allowed the invasion, then reversed course by imposing sanctions after the fact. He raised tariffs on Turkish steel imports, halted negotiations on a $100 billion trade deal, and cut several Turkish government ministers off from global banking. None of these measures came close to the US sanctions imposed on Cuba, Venezuela, and Iran—nor were they likely to have any serious impact on the war.

And then, after announcing the ceasefire, Trump dropped the sanctions altogether.

Unfortunately, some leading Democrats are using the crisis to attack Trump from the right. Democratic hawks Chuck Schumer of New York, Robert Menendez of New Jersey, and Jack Reed of Rhode Island want Trump to return US troops to Syria.

That would be a colossal blunder. In principle, Washington should not launch yet another unilateral invasion. In practical terms, there’s still a war going on in northern Syria, and the US has no allies left.

“It would expose US troops to fire from all sides,” Craig says. “Syrian Kurds, Russians, and Turks are angry. What would the US troops do?”

Could craziness lead to peace?

The newly minted alliance of SDF, Russia, and the Syrian government opens up the possibility of reunifying Syria and helping expel foreign troops. But implementation won’t be easy because of serious political differences.

For the past several years, under US military protection, the SDF has implemented its version of autonomy in northern Syria. It created local councils with women making up half the leadership. Christians, Arabs, and other ethnic/religious groups were guaranteed representation.

The SDF is affiliated with the Kurdistan Workers Party (PKK) in Turkey, which, contrary to mainstream media reports, gave up Marxism more than twenty years ago and adopted a hodgepodge version of anarchism that stresses feminism and environmentalism. However, the PKK continues to exclude participation by other political parties to its left or right. And it promotes a cult of personality around PKK leader Abdullah Ocalan.

The US and Turkey falsely label the PKK a terrorist organization. The PKK engages in armed struggle, but doesn’t massacre civilians like IS or Al Qaeda.

President Assad, on the other hand, favors a highly centralized state. While he allows presidential and parliamentary elections, real power resides with the president, military, and ruling Baath Party. Syria’s leaders fear that granting autonomy to Kurds will be the first step in the creation of an independent Kurdistan in northern Syria.

Previous efforts by the SDF and Assad to reach a political settlement have failed. In August 2018, the SDF and government held talks and even formed a committee to continue negotiations. But the talks broke down, largely over disagreements on autonomy.

In the last two weeks, faced with the prospects of a permanent Turkish occupation of northern Syria, both sides agreed to cooperate. The SDF/government agreement hasn’t been made public. But there have been leaks.

Danny Makki, a pro-government analyst and blogger, writes that the SDF-affiliated soldiers have agreed to join the Syrian Army’s 5th Corps, a contingent of foreign volunteers trained by Russia. Both sides have agreed to remove Turkish forces from northern Syria. And, most controversially, Makki writes, both sides agreed to “full Kurdish rights in the new Syrian constitution with autonomy, which will be agreed upon by Kurdish leadership & Syrian state.”

But another source in Damascus, who requests anonymity because the government hasn’t announced its position, doubts the Syrian authorities agreed to any kind of autonomy. “The SDF wants self administration, and it’s not acceptable,” the source tells me by phone. “Syria can’t accept a state within the state.”

I suspect that all sides agreed to cooperate without even starting to resolve political differences. Every side gets something in the short run.

After a seven-year absence, Assad will send his army back into much of northern Syria. The SDF hopes this will deter further Turkish attacks, while the SDF continues its civilian administration. And the Russians will appear as peace makers among the various armed groups.

They say politics makes strange bedfellows. So does war.