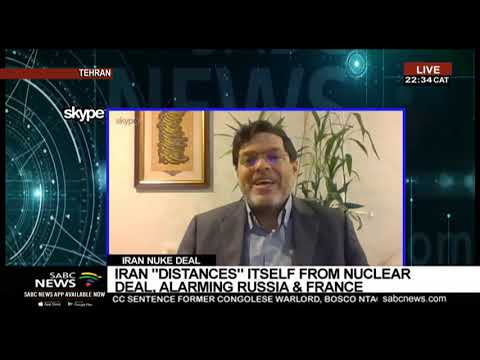 It would be rational for Iran to pursue a nuclear bomb. Ironically, the U.S. has long been compelling it in this direction. The U.S. also bears the blame for the newest escalation, as it does for the enemy relationship generally.

U.S. leaders will be quick to discard these statements as blatant nonsense. Such a reaction, however, is based on their very selective memory of the actual history between the U.S. and Iran, on rationalizing the U.S.’s hostility toward Iran, and on not understanding Iran’s legitimate security needs.

It just so happens that this current escalation is playing out during the fortieth anniversary of the Iran Hostage Crisis. In November 1979, a group of young Iranians stormed the American embassy, took over fifty U.S. citizens hostage, and began an ordeal that would last well over a year. Americans found the happenings inexplicable; to them it was an episode of unfounded Iranian hostility. Forty years later, people feel more or less the same.

At the time when the hostages had been held for about a year, the chief diplomat shouted at one of the hostage takers, “You have no right to do this.” This is certainly correct– Iran violated international law. The hostage taker, however, responded, “You have no right to complain, because you took our whole country hostage in 1953.” Even today, Americans tend not to know about the 1953 U.S. coup to overthrow Iran’s democratic government and to halt the country’s move to take control of its own petroleum. It remains largely an unknown history in the U.S. and certainly was an even more egregious violation of international law, affecting millions for decades.

The U.S. started the enmity with Iran. In the meantime, to be sure, the regime in Tehran has engaged in its share of hostilities and when U.S. allegations of an Iranian pursuit of nuclear weapons became louder in the 1990s, these ambitions were always interpreted as being driven by offensive motivations.

To prevent Iran from becoming dangerous, the Obama administration, together with the other members of the UN Security Council plus Germany, concluded the 2015 Joint Comprehensive Plan of Action (JCPOA). Iran was to subject its nuclear program to rigorous international inspections. In return, it would have international sanctions lifted. Iran’s economy would be able to recover and many Western companies would stand to benefit from the Iranian market. It was a win-win outcome, and Iran scrupulously abided by its terms.

With the ascent of the Trump administration, things turned, however. Half a year into his presidency, President Trump alleged that Iranians “are not in compliance with the agreement,” and subsequently he withdrew the U.S. from the agreement. Trump was lying, as evidenced by more than a dozen International Atomic Energy Agency reports as well as by the U.S.s’ own intelligence. The escalation we’re seeing now, wouldn’t have happened if the Trump Administration would not have withdrawn from this productive agreement.

The more fundamental point is this, however: Even if Iran were secretly pursuing a nuclear weapon (for which there is no evidence), it would be only rational. Iran would do so for reasons of deterrence, and not for offensive reasons. As illustrated from 1953 onwards, Iranians have good reason to fear the U.S. and thus be equipped to dissuade it from a military attack. Moreover, given that Iran is surrounded by the nuclear powers of Israel, Pakistan and India, it would be perfectly logical for Iran to be pursuing nuclear weapons to establish a regional balance of power. Every rational U.S. leader would do the same in such a geostrategic situation.

Having said this, it is, however, not a given at all that Iran is pursuing a nuclear bomb. In fact, there is a good argument to be made that it would have done so already, if it really wished to. Arguably, what Iran does want is what is referred to as ‘latency’ or the “Japan option,” that is the ability to produce nuclear weapons in short order so as to effect a viable deterrent. The JCPOA was a compromise here; Iran would retain the expertise for developing a nuclear capability, but its time-line to achieve this would be significantly lengthened.

What Iran also wants, understandably, is economic progress. If the goal of the U.S and the European Union is to avoid a nuclear-armed Iran, there are two options. The U.S. must engage in immediate talks with Iran and move toward the reactivation of the 2015 nuclear deal. Alternatively, the EU must stop acquiescing in the Trump Administration’s counterproductive maximum sanctioning strategy toward Iran and provide economic opportunities instead.