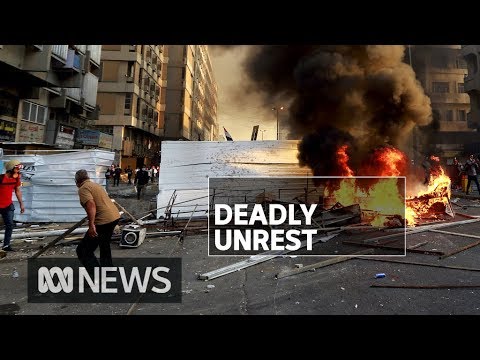 Once again, people in the Middle East want democratic reforms and an end to corruption and foreign domination.

Hundreds of thousands of Iraqis and Lebanese have been demonstrating in the streets against corruption and for democratic rights. The protestors come from all economic classes and religious/ethnic groups.

Like the Arab Spring uprisings that began in 2010, these protests are spontaneous and without traditional leaders. And they are sending corrupt political parties and foreign powers scrambling to manipulate the protests for their own nefarious ends.

The current protests raise many of the same issues as the Arab Spring, says David Dunford, a former US ambassador to several Middle East countries and author of From Sadat to Saddam: The Decline of American Diplomacy in the Middle East.

“People in both countries are sick and tired of sectarian jockeying and foreign influence,” he tells me in a phone interview.

In my opinion, the uprisings expose false logic of the vacuum theory, which posits that US military withdrawal automatically benefits the villain du jour, whether Russia, Iran, or China. Instead, the protests show that the people of the Middle East don’t want domination by Washington, D.C., or any outside power.

On a trip to Lebanon earlier this year, I spoke with businessmen who warned of a coming economic crisis. The Lebanese currency was dropping against the dollar, and the businessmen saw an economic meltdown coming.

It wasn’t hard to see why. Walking along Beirut’s cornice, or seaside road, I passed by dozens of vacant, multi-million dollar condos owned as vacation homes or investments by Saudi sheiks and Emirati businessmen.

Meanwhile, working class Lebanese can’t get basic services: electricity, garbage collection and protection from raging forest fires. The poverty rate is around 30 percent, according to the World Bank.

On October 17, spontaneous demonstrations began when the government imposed a new tax on the What’s App program, widely used on cell phones to make free calls. But demonstrators quickly added corruption and lack of democracy to their list of demands. They called for the entire government to resign and an end to Lebanon’s system by which certain government positions are guaranteed to each ethnic/religious group and hence to the corrupt political parties.

People sat down on major thoroughfares and set up roadblocks. Universities shut, and when they reopened, students refused to attend. Banks closed because depositors feared they couldn’t access their money.

For the first time, Lebanese from different economic classes and religions joined together demanding an end to the country’s sectarian political system. They opposed the old, corrupt parties, whether backed by the US, Saudi Arabia, or Iran.

People were particularly angry with Prime Minister Saad Hariri, who gave $16 million to his bikini model mistress. Hariri and his cabinet resigned October 29. All the parties in the ruling coalition, which was led by Hezbollah, scrambled to respond.

Amal and Hezbollah, the two parties with largely Shia Muslim support, initially supported the demonstrations. But so did Samir Geagea, the ultra right wing Maronite Christian leader and sworn enemy of Hezbollah.

Groundhog Day all over again

The Trump Administration, in what has become a Groundhog Day experience, didn’t know how to respond to yet another world crisis, according to a former US diplomat who recently met with White House and State Department officials. Washington views Lebanon through the prism of Iran and Syria, he says. “They have no understanding of what’s going on in Lebanon,” the diplomat tells me, on condition of anonymity.

So far, the Trump Administration does not plan a military intervention but seeks to weaken Hezbollah, which it alleges is an Iranian proxy. But factions within the administration differ on tactics.

The White House’s National Security staff believes Hezbollah controls the Lebanese government and has significant influence in the Lebanese Army. They want to pressure the Army and opposition parties to break with Hezbollah.

So on October 31, in a surprise move, the US stopped all aid to the Lebanese Army, including $105 million which had been already approved in September.

The State Department and Pentagon opposed the aid cut, arguing that the Army constitutes a stabilizing and pro-western force. Cutting US military aid, they argue, just provides more openings for Iran and Russia to exert influence.

All sides believe that the mass protests have weakened Hezbollah. But Hezbollah not only has a well-armed, battle-hardened militia, it can mobilize tens of thousands of civilian supporters in a matter of hours. It consistently wins seats in the Lebanese parliament and has proven adept at forming electoral alliances, even with former enemies.

Iraqis oppose US and Iran

Given Lebanon’s unsuccessful system guaranteeing government positions to ethnic groups, you’d think the US would have tried something different in Iraq. Instead, Washington has created an equally flawed system and imposed it on a poorer, war-ravaged country.

In Iraq, the political parties break down by religious/ethnic group, resulting in a Shia Muslim prime minister and Kurdish president. Each party places its supporters in government jobs and issues government contracts to corrupt partners. As a result, the government functions as an ATM for the parties and the wealthy elite.

Meanwhile, ordinary Iraqis don’t have safe drinking water and government-supplied electricity. Many complain that government services are worse today than under Saddam Hussein.

Protests against corruption and the party system broke out October 1. Demonstrators condemned corruption in the pro-US and pro-Iran parties in Iraq, and within the parties of the Kurdish region.

The government launched a brutal crackdown. To date, more than 300 protesters have been killed, mostly by uniformed security forces and government-affiliated snipers.

Protesters threw gasoline bombs at the Iranian consulate in Karbala and chanted anti-Iran slogans. Persons unknown launched seventeen rockets into a US air base.

Iraqis have long opposed US occupation of their country. But over the past few years, they’ve also grown angry at Iran’s influence over certain political parties and Iranian-controlled militias affiliated with the Iraqi Army.

Grand Ayatollah Ali Sistani, Iraq’s leading Muslim cleric, has supported the demonstrations and opposed Iranian meddling. Moktada al-Sadr, whose political party won a plurality in the last parliamentary elections, has called for an end to all foreign interference, whether from Washington or Tehran.

The uprisings in Lebanon and Iraq show once again that people in the Middle East want democratic reforms, and an end to corruption and foreign domination. Nowhere is it written that countries must either support the US or Iran. It may be difficult, but people can determine their own future.