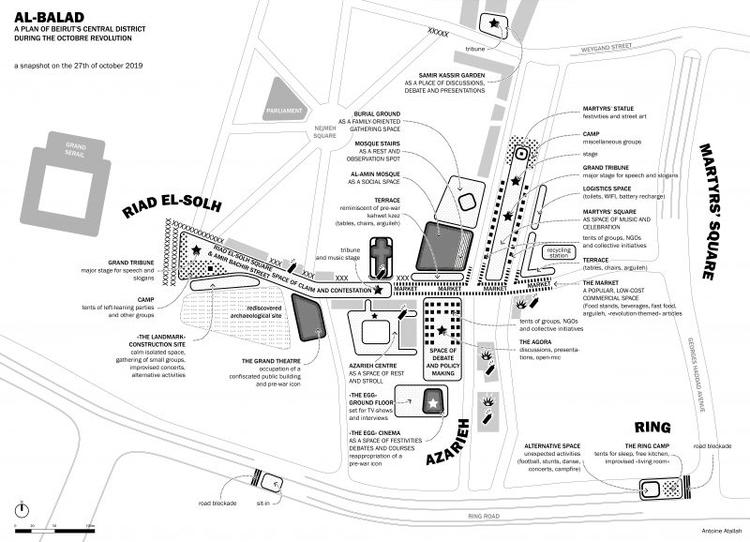 (GlobalVoices.org) – The protests that have swept Lebanon since October 17, 2019 started as a reaction to the announcement by the government of new taxes. They have since evolved into a rejection of the political and economic model that has allowed local elites to maintain control over the country since the end of the civil war in 1990. United across religious communities, classes and gender, the protesters marked an important victory on October 29 when Prime Minister Saad Hariri stepped down.

The map designed by Antoine Atallah shows how different groups of protesters occupied the space to conduct different kinds of activities. Used with permission.

The demonstrations have since been widely reported in the Middle East and beyond in news stories, photos and video—and now, one extraordinary map. A very recent addition to the narrative of the movement is a cartographic representation of the protests by Antoine Atallah, a Lebanese architect, urban designer and environmental activist. 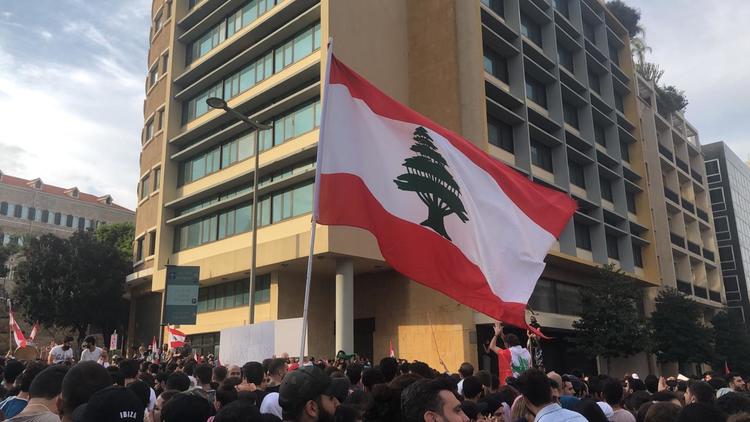 Demonstrations in Beirut on October 19, 2019. Photo by Shahen Araboghlian via Wikipedia, CC BY-SA 4.0

Asked about why he chose that particular form, Atallah explains:

“Maps are important additions to the visual “magma” we’re being exposed to because they allow us to summarize, reflect and put things in perspective. An outer, zoomed out, snapshot makes them more obvious”.

Asked about what motivated him to do such work, he says:

“It’s the fact that for the first time since the beginning of the civil war and the subsequent Solidere takeover, people were given a chance to claim their right to the city in an area that was taken away from them. It’s an extremely inspiring moment, where “city-making” can be observed live. I felt that mapping this process is extremely important since the current occupation is fleeting and precarious, can shift and change or disappear suddenly”.

Atallah is referring above to the company Solidere, which has close links to then President Hariri and started in 1994 to rebuild and gentrify that area with fancy restaurants and boutiques catering mainly to wealthy Lebanese and visitors from the Gulf.

While the map has been circulating on social media for just over 24 hours, it is already gaining traction because it illustrates the essential needs of many residents, Atallah says:

“Lebanese people have appropriated the voids of the city center to create the function they need: to discuss, to rest, to eat and have fun for free or for cheap, to dance. This is a lesson to everyone who underestimated people’s awareness, maturity and capacity to be space builders, to be creators of function and meaning, to be actors of a collective project” .

Regarding his hopes for the future, Atallah concludes:

“The challenge comes from the political system which has imposed itself for 30 years and maintains wide leverage and huge power. In fact, the main challenge comes from asking a parliament which is against us, to compose a government that will be against them. The equation is complex and challenging. But I also trust the collective intelligence that’s been displayed in all those weeks of revolution. It will surely prevail and nothing will ever be the same again”.