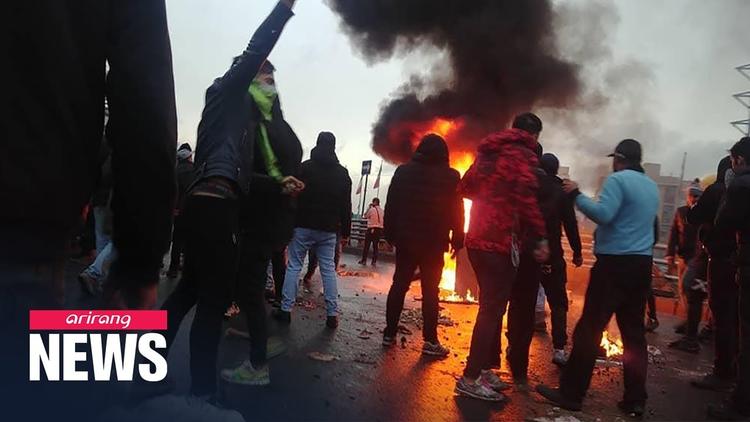 Ann Arbor (Informed Comment) – The crowd protests that grew to affect 100 cities over the weekend in Iran were sparked by the government increasing the price of gasoline by as much as 3 times overnight.

But the underlying discontents with the government have been caused by a sinking economy, expected to shrink by 9% this year.

In turn, Iran’s economic woes derive from Donald Trump’s economic blockade of the country, whereby he has virtually halted Iranian oil sales to countries like Japan and South Korea, and to and Europe, by threatening consumer nations with US Treasury Department sanctions. Before Trump, Iran had been exporting 2.5 million barrels a day of petroleum and was beginning to integrate into the world economy.

Now, after Trump breached the 2015 JCPOA Treaty, Iran has been barred from much international commerce, the value of its currency has plummeted, and last May it exported about 300,000 barrels of oil, a little over a tenth of its pre-Trump production.

Make no mistake. The maximum pressure campaign was plotted out by Mike Pompeo, John Bolton, and other warmongerers closely tied to the US arms industries, to Saudi Arabia and to the Israel lobbies, all of which would like to see the Iranian regime overthrown and the exercise of US military power in that country.

The campaign aims at regime change, and the social unrest it has succeeded in provoking is testimony to the deadly efficiency of the blockade. A physical blockade is an act of war in international law, but this economic blockade comes to the same thing.

The situation eerily resembles that in summer, 1953. In 1951, Iran had nationalized its oil facilities, after the Anglo-Iranian Oil Company (BP) declined to pay what Iran thought was a fair price for its petroleum. In the wake of the oil nationalization, elderly conservative nationalist Mohammad Mosaddegh was elected prime minister by parliament because of popular support for Iran asserting ownership of its own oil resources. The British were completely expelled from Iran.

In response, US President Eisenhower and UK Prime Minister Winston Churchill* coordinated a worldwide boycott of Iranian oil. The US put severe pressure on Japan and Italy not to wildcat and buy it on the world market.

As Nikki Keddie wrote in Roots of Revolution, oilman Max Thorberg wrote in 1953 to Claire Booth Luce, the US ambassador to Italy that if Rome took more Iranian petroleum the US oil majors would take revenge on Italy:

The severe boycott of Iranian oil exports plunged the country’s economy into crisis and stirred popular resentments, so that Mosaddegh’s popularity sank to ever new lows within two years. By summer of 1953, his position was so weakened that the US Central Intelligence Agency was able to network with conservative Iranian officiers, clergy and others to connive at a bloody military coup against Mosaddegh.

The US Embassy in Iran reported popular discontent with Mosaddegh at the beginning of July, 1953, because of the deteriorating economy, but managed rather dishonestly to avoid mentioning that the US-led economic boycott of Iranian petroleum was the cause of that deterioration in Iranians’ standard of living:

The Embassy has lately been receiving reports tending to indicate that Prime Minister Mosadeq has lost much of the popular support which he previously enjoyed. Without the means or possibility of employing scientific public opinion polling techniques, it is of course impossible to draw definite conclusions, but the comments received may reveal a broad trend.

Original Support and Its Decline

There seems to be no question of the broad base of popular support for Dr. Mosadeq at the time he first took office as Prime Minister. As leader of the struggle against the Anglo-Iranian Oil Company in a country where resentment and even hatred of the British is deep-rooted, Mosadeq could count upon the support of people from all levels of society with but few exceptions. For many months after oil nationalization, the Prime Minister’s popularity continually mounted. To the common people, Mosadeq was looked upon almost as a demigod.

The phenomenon of Mosadeq was almost unique in Iran. The figure of a frail, old man, in an Oriental country where age of itself commands respect, who appeared to be successfully winning a battle against tremendous odds, aroused the sympathy of almost all Iranians. In a country where political corruption had been the accepted norm, there now appeared a man whose patriotism and financial honesty were unassailable.

The economic and financial situation of the country, however, continued to worsen and as opposition to him increased, the Prime Minister found it ever more necessary to adopt arbitrary means to silence it. The contradictions in his public statements and promises continued to become more glaringly apparent. While speaking of an “oilless economy” on the one hand the Prime Minister excused his failure to initiate promised reforms on the ground that he could not “fight on two

[Page 613]
fronts”. The much promised “oil solution”, which was constantly dangled before the people, failed to materialize. More and more demands for dictatorial powers were made, and more and more the Prime Minister was compelled to employ arbitrary and high-handed methods to keep himself in power.

For months Mosadeq failed to leave his residence for fear of his life. He admitted fear of crowds. No longer was he able to address “the people” in parliament square. His speeches were delivered from his bed into a recording machine and played back over Radio Tehran. He did not dare make a public appearance. Mosadeq was no longer the popular hero.

The Prime Minister finally made it clear that he intended to remain in office regardless of popular support. With the backing of a minority of deputies, it was now he who could use the threat of obstructionist tactics. He warned that he would remain in office as long as he had a simple majority in parliament of one-half plus one. He no longer demanded overwhelming votes of confidence. It was clear as well that, if he were not sure of obtaining one-half plus one, his faithful group of deputies could simply hold up proceedings by merely walking out of the parliamentary assembly. He has now gone a step further and threatened the dissolution of the Majlis . . .

As to the Prime Minister’s popularity the following comments are revealing. April 7 the Consul at Tabriz sent a message to the Embassy which stated that it was apparent the Prime Minister’s hold over Azerbaijan had “weakened visibly” during the previous two months. The Consul noted an increasing amount of publicly expressed opposition to Mosadeq indicating a decline in his personal prestige, and that the attempt of the Prime Minister to undermine the Throne had resulted in increasing the Shah’s prestige “to the detriment of Mosadeq”.

In a letter dated April 1, 1953, the Consul at Isfahan made the following comment:

“I think I should report that for many weeks now people with whom I have talked have spoken with growing dissatisfaction about Dr. Mosadeq and the ‘government’ in general. Articulate persons are dissatisfied with lack of accomplishment, non-progress toward settlement of the oil controversy, new taxes and regulations governing foreign commerce. They talk mysteriously of a coming change in Tehran, that matters cannot go on as at present. This comment is not meant to be a public opinion poll, but just a report of comments and the thinking of some of the ‘better class’ people with whom I have talked.”.

By August 19, 1953, there were nation-wide crowd protests, with leftists pitted against American rent-a-crowds chanting their demand that Mohammad Reza Shah Pahlevi, who had fled to Italy, return to the country.

“Police and soldiers swung into action tonight against Tudeh (Communist) partisans and Nationalist extremists . . . The troops appeared to be in a kind of frenzy as they smashed into the rioters with clubbed rifles, tear gas bombs and nightsticks . . . The rioting surged through the downtown area [of Tehran] tonight as the extreme Nationalist Pan-Iranists, armed with metal-tipped wooden spears, sought to avenge the torching of their headquarters by Tudeh gangs in the morning.”

Actually, the pro-Mosaddegh forces were not Communists, and by then the Tudeh Party had largely broken with Mosaddegh. And the so-called “extreme Nationalists” were just paid for by US secret agent Kermit Roosevelt (a cousin of FDR).

These crowd protests and clashes were a prelude to the CIA-orchestrated coup the removed Mosaddegh from office, placed him under house arrest till his death a few years later, and brought back the Shah or king as a capitalist dictator who moderated Iran’s oil prices in the service of Washington DC until he was overthrown in 1979.

So that’s how it is done folks. First, a complete economic blockade on a country’s exports, then tut-tutting at how the government seems to have become unpopular in the face of economic deterioration, and then some furtive meetings with seedy far-right-wing militarists and the spreading around of money to create crows protests, and then the coup on behalf of imperial interests.

I’m not suggesting that the crowds in today’s Iran are being paid to be out there; on the contrary, I’m quite sure that they are severely distressed. You could blame some of the unrest on unpopular economic and social policies of the regime that might have been enacted even with no US blockade. But I am suggesting that the primary cause of the distress is a Trump plot on the Iranian economy that looks an awful lot like what was done in 1951-1953 to put Iran back under the thumb of Washington and Big Oil.

*An earlier version of this post misidentified the UK prime minister of 1953; IC regrets the error.