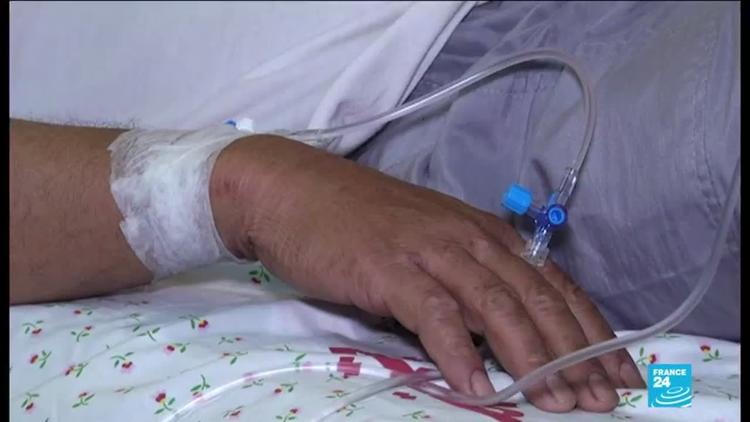 Ann Arbor (Informed Comment) – Al Jazeera English reports that a big tweetstorm broke out on Twitter after the Israeli military posted a tweet about two female soldiers who shaved off their hair and donated it for wigs for cancer patients. Chemotherapy is accompanied by hair loss.

Observers complained that the Israeli military authorities have imposed a blockade on the some two million Palestinians in Gaza since 2007, which has led to a chronically bad economy and poor hospital service. Most Palestinian cancer patients need to go outside the Strip for treatment, but about 40% of such requests are denied by Israel, leading to patient deaths.

Embed from Getty Images
A Palestinian girl suffering from cancer is seen at the al-Rantisi children’s hospital in Gaza City on April 6, 2017. The World Health Organization and others have pointed to the effect the Israeli blockade has had on medical crossings, a crucial issue for impoverished Gaza, which lacks proper medical equipment in many cases. Many patients seek treatment in Israel, and some in the occupied West Bank, the other Palestinian territory separated geographically from Gaza. / AFP PHOTO / MOHAMMED ABED (Photo credit should read MOHAMMED ABED/AFP via Getty Images).

Imposing collective punishment on a whole population is a war crime. Israeli responses that Gaza is controlled by Hamas, which has been designated a terrorist organization, are dishonest and racist. Half of the population of Gaza consists of children, who are not members of Hamas, and, indeed, since it is a cadre organization, relatively few Palestinians are members.

Noam and Inbal donated their hair to make wigs for cancer patients.

What a beautiful act of kindness ❤ pic.twitter.com/QBQT1E4PKw

The World Health Organization interviewed Samira, 64, who was diagnosed with uterus cancer in 2016. She had an operation, but needed follow-up care and radiation treatment not available in Gaza. She was referred to a hospital in East Jerusalem. She had to apply to the Israelis 5 times, and to wait 6 months for an Israeli exit permit. She says, “All that time I was suffering from unnatural hemorrhaging. My exit permit was a matter of life or death for me. Why didn’t I [immediately] receive the exit permit?”

Or there is Khadija, 32, and a mother of four, who noticed a lump in her breast in December 2017. By January 2018, Gaza physicians had confirmed that she had breast cancer. They wanted her to go Augusta Victoria hospital in East Jerusalem for further tests to see how far the cancer had spread. She applied for an exit visa and it was denied by the Israeli authorities. She started chemotherapy in Gaza, but really needed to go somewhere with better facilities. She applied again to leave and the Israeli government again denied her request. She then tried Egypt, which has a border crossing at Rafah that is even more strictly controlled, and finally was able to go to Cairo. (Israel apologists sometimes attempt to shift blame to Egypt for the Gaza blockade, but the policy is completely determined by Israel and Egypt is just a subordinate in it; the Egyptians know that many Israelis would love to force all 2 million Palestinians out of Gaza and make them refugees in Egypt, and they simply aren’t going to allow that.) The more important point is that Israel twice told this young mother that should could not have the requisite treatment for her cancer if it was up to them.

In 2017 alone, an Al Jazeera interviewee alleges, some 57 Palestinians in Gaza died of cancer because they could not get the requisite treatment.

The World Health Organization reports that 4 in 10 applications by Gaza cancer patients for exit visas were rejected by the Israelis in 2018, Al Jazeera says, and adds that there are at least 8,515 cancer patients in Gaza, including 608 children. Because of the Israeli blockade, which makes funding a world class hospital impossible, many Palestinians are only diagnosed in the later stages of the disease, which presents big hurdles for successful treatment.

Embed from Getty Images
GAZA CITY, GAZA – OCTOBER 12: A group of women release pink balloons into the sky during an event organized in order to inform citizens about breast cancer in El Katibe Square in Gaza City, Gaza on October 12, 2015. (Photo by Mohammed Talatene/Anadolu Agency/Getty Images)

Palestinian women with breast cancer charge that they find it particularly difficult to get treatment and permission to go abroad from the Israeli government. In 2016, reports al-Amad, 548 female breast cancer patients applied for exit visas from Gaza. Of those, 287 did not receive a permit (I think this means they did not even get an answer), and 125 were rejected on security grounds. That is a 75% de facto rejection rate, not the 40% the WHO reports for cancer treatments in general. If these statistics are correct, the Israelis’ policies are particularly damaging to Palestinian women.