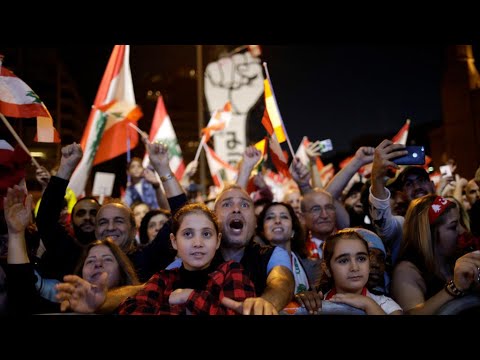 (Via Waging Nonviolence) – Unlike previous movements, demonstrations in Lebanon have spread to all parts of the country and are targeting the entire political establishment.

Holding a megaphone, a women chants to the crowds gathered at Martyrs’ Square in the middle of central Beirut, “We are the revolution of the people, you are the civil war!” The people, filling up the entire square and streets leading up to Lebanon’s parliament, repeat the words in unison. “You are the civil war,” they chant, “we are the revolution.”

It is an afternoon in early November, more than three weeks since the uprising against political corruption began in mid-October. Unlike previous protest movements in the small Mediterranean nation, demonstrations have spread to all parts of the country, including small towns and villages, and are targeting the entire Lebanese political elite.

“All of them, and we mean all of them!” the protesters chant, sparing no one.

Like each day, it is a diverse crowd that has gathered in the square. Parents have arrived with their children, young people with their friends. In their hands are posters with handwritten slogans or jokes, each smarter than the other.

“We are missing our lessons to teach you one,” one student’s poster says.

“We are not here to study history, we are here to write it,” says another.

More than ever before, youth have come to form an important part of the movement. University students have led sit-ins and strikes; school children have articulated the most clear-sighted demands and critiques. Just like the uprising as a whole, the students do not have a unified leader. Many have organized on their own, or through university student groups.

A bit further away on the square, loudspeakers blast an electronic version of “The people want the regime to fall,” the slogan familiar from the Arab Spring.

But Lebanon is different. There is no absolute ruler to be toppled, no dictatorship to be brought to an end. The country, at least on paper, has some features of a democracy — an elected government, even if many politicians are former warlords, a partly free media and a deeply rooted tradition of free speech.

What remains is a long list of failures, which is what brought people out into the streets. There is record-high inequality (Lebanon has one of the highest rates of billionaires in a population), terrible infrastructure (the electricity cuts out daily, and despite rich rainfalls, water is in constant shortage), the looming ecological crisis (manifest most blatantly in the garbage crisis of 2015, when trash was left in the streets for weeks) and an ongoing, yet-to-be-resolved economic emergency.

The blame for all of this, say the protesters, is on the political class, which has managed, successfully and uninterrupted, to stay in power since the days of the 1975-1990 civil war, ruling through extended networks of patronage.

The formula for ruling, since Lebanon’s foundation as a state, has been to distribute power along religious lines (the country has 18 recognized religious groups). But it has been a formula for division, not unity.

“The sects have been hijacked by the politicians, and people have become hostages to their sects. This sectarian system will never be able to function,” said Lamia Osseiran, a long-time civil activist.

She has been out in the streets every day since the uprising began, as have her daughters and most of her friends.

What initially sparked the protests may seem insignificant — a tax on WhatsApp, announced as an attempt to get desperately needed funds to stave off some of the effects of the financial crisis. But to millions of Lebanese, for whom this is the only affordable way of calling, it showed just how out of touch politicians are.

“We are in the streets because we have nothing in this country,” said Hussein Ghandour, a recent graduate. “There’s no welfare, zero. And everyone is affected. My mum has a gastric disease and is struggling all the time to get care.”

He is standing behind a table at Martyrs’ Square, set up by an organization called Nahnoo, working on public space issues. Since the protests began, the entire area has seen a transformation. From being a privately owned and expensive part of the city, it has come — if momentarily — into the hands of the people.

Volunteers go in the early mornings to sort and recycle garbage from the night before. Street vendors, who are normally not allowed into the square, arrive at nightfall with sweets and snacks. One afternoon, a group of people brought plants from the mountains, and planted them in holes in the concrete.

Tripoli, the second-largest city in Lebanon, has been transformed in a similar way. The central Nour Square (which despite its name is a busy roundabout) is filled with people each evening. The big building overlooking the area, previously cement grey, has been painted like a gigantic Lebanese flag. A group of women chop onions for a free communal meal; members of the youth-led volunteer group “Guardians of the City” walk around talking to people, offering help to those who might need it.

In both cities, debates and open mics are held daily. People gather to discuss tactics and goals, share personal stories, and speak about what kind of country they want in the future.

“We don’t know what government will come after this one falls, but power must always rest with the people,” said a woman who introduces herself as Rayan.

But the path ahead is far from straight. Political divisions, kept in place by the sectarian system, run deep in the country, and are not easily overcome. In the face of a mostly absent state and non-existing welfare system, people are left with few options but to rely on the sectarian leaders.

Leaders from across the political spectrum have tried to play things to their own advantage. Parties like the Kataeb and Lebanese Forces went down to join the protests — to the outrage of activists, who do not want to their revolution to be hijacked. Supporters of opposing parties, Amal and Hezbollah, intimidated and confronted demonstrators, and destroyed the tents on Martyrs’ Square.

After two weeks of demonstrations, Prime Minister Saad Hariri came out with his resignation, leaving the country without a sitting government. But few saw this as a victory for the protesters.

“He was the low-hanging fruit who was likely to resign,” political analyst Rami Khouri said to Al-Jazeera.

It did not end the uprising either. Schools may have reopened — as have banks, amidst talks of collapse and bankruptcy — but sit-ins and demonstrations are organized daily. People take aim at symbolic institutions like the Central Bank and the state-owned electricity company, or hotels built on formerly public land.

Across the country, at 8 p.m. each night, people beat loudly, in unison, with spoons on pans from their kitchens. The message: We have nothing to put in our pots.

People’s demands have not changed after Hariri’s resignation. The movement, which remains broad and with no unified leadership, continues calling for an end to political corruption, the establishment of a civil state, economic reforms and social justice.

On the evening of Nov. 12, President Michel Aoun delivered a pre-recorded speech. Midway through, he said that if people “aren’t satisfied with any of the decent leaders then let them immigrate.” Immediately, crowds took to the streets, closing off roads with burning tires. Later that night, a father of three, Alaa Abou Fakher, was shot to death by an army member in front of his wife and child.

Few people can say where things are headed, whether there will be any real, significant change. Not everyone is optimistic. But one thing is clear, one transformation has already happened.

“We have never seen people united like this before. Not even before the war, nor at any time in our history,” Osseiran said. “I think no one expected it to happen so soon and in such a massive way.”

At the open mic, in a corner of the expensive shopping district bordering Martyrs’ Square — which before the uprising was scarce of people and is now teeming with life in the evenings — a 15-year-old student named Aya has gone up to speak.

“We learned about Lebanon in school, but I never learned so much about my country as now,” she said to the crowd. “It is the first time that I feel proud of being Lebanese. And the first time I feel like I want to stay here to make things better, not leave.”

Jenny Gustafsson is an independent journalist and editor, living in Beirut since 2009. She reports from across the Middle East and South Asia, on issues including society, development, migration, heritage and crafts.