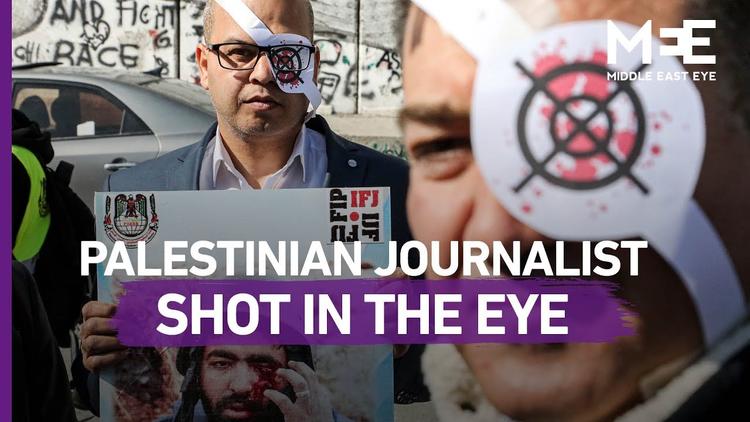 On Friday, November 15th, photojournalist Muath Amarneh left his home wearing his uniform and blue helmet to cover the demonstrations by residents of the village of Surif, near Hebron, against the Israeli confiscation of their land. By the end of the day, Amarneh himself became the subject of news and press photos. The demonstrators took him from the field to the hospital after the Israeli army inflicted a bloody injury to his left eye.

It may seem that Muath Amarneh lost one of his eyes by the heavy rubber bullet that cost many Palestinians their eyes before him. Still, in the following days, the photojournalist gained the eyes of those supporting him around the world. They posted their pictures with only one eye showing along with the hashtag #Muatheye or #Eyeoftruth.

Such violent behaviour is not new to the occupation, which pursues those capturing journalism photos, but times have changed, and the victims of these violations are no longer alone. The successive Israeli attacks on journalists and photographers in the field reveal that the military occupation system, designed in the last century, has not adapted to the new era yet. Its soldiers find it easy to shoot journalists carrying cameras in an attempt to hide the situation from the world. Still, they are committing these violations in the time of smartphones, social media, and live streaming, which suggest that this occupation is unable to adapt to the logic of the 21st century.

The Israeli occupation and apartheid regime recognised from the outset the importance of the “battle for consciousness”. Thus it was keen to adopt propaganda strategies and tactics that allow it to create a false reality and practice the art of misguidance and distraction from the occupation’s policies, settlements, murders, violations, and abuse.

READ: Sanders attacked by Israel envoy for wanting to direct US aid to Palestinians

The Israeli propaganda machine is known for its significant influence from the beginning, as well as its expertise in falsifying the image of the occupation.

The competition between the occupation authorities, supported by a superpower on the one hand, and a people under its direct domination on the other, is not usually equal or balanced. Still, the reality of the media confrontation remains based on the reality on the ground that cannot be hidden forever and the efforts to falsify its image or whitewash the truth in the eyes of the world.

One of the occupation’s propaganda dilemmas is that the question of Palestine is based on a clear and specific story that cannot be denied in any objective contemplation that is devoid of prejudices and preconceptions. Facts on the ground support it. Who, for example, c convince the world that seizing the land of Palestinian farms and erecting giant grey walls around the Palestinian communities is an ideal policy? Or that the soldiers’ killing of children playing on the beach or arresting minors from their homes at dawn is behaviour to be proud of? Or that killing a Palestinian paramedic wearing her white coat in the field, along with committing massacres against dozens of other peaceful protestors of all ages, and justifying it in public is indeed moral and civilised behaviour?

If the Israeli military machine decides to control the land by force and continues to deprive the Palestinian people of their rights to freedom and self-determination since the last century, then its problem remains existent with the miserable reality it created and continues to reinforce through brutality. This is especially given the undying desire for liberation expressed continuously by the Palestinians, one generation after the other. The occupation authorities have been unlucky given the new opportunities for the masses across the world to follow the occupation, oppression, and brutality occurring on the ground. The growth in prospects for networking and broadcasting will continue to put more and more pressure on the occupation’s propaganda.

It seems understandable, therefore, that reporters and photojournalists are the targets of selective sniping and violent assaults by occupation soldiers, as the eyes open to reality can reveal the truth and undermine the naïve propaganda narrative with its spun claims.

Thus, the violence of the Israeli occupation does not only target Palestinian demonstrators in the Gaza Strip and the West Bank but has also sought to intimidate journalists. The occupation has used several means of intimidation, including killing, wounding, abuse, and arrest.

This is a clash between the gun and the camera or a confrontation between the bullet and the eyes open to its violations.

Journalist Muath Amarneh indeed lost one eye in the field. Still, he gained the eyes of supporters around the world who covered one eye and kept the other open to continue to monitor the truth that cannot continue to be withheld in this day and age.

Middle East Eye: “Palestinians stand in solidarity with journalist shot in the eye”