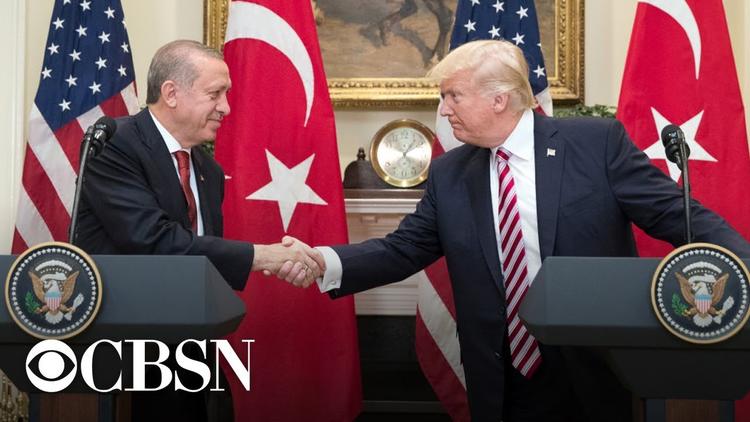 Four big issues have introduced a severe strain into the US-Turkey relationship, though Trump for some reason treats Erdogan as teflon, just as he does Vladimir Putin.

1. Turkey’s invasion of the Kurdish area of northern Syria has displaced tens of thousands of Kurds from their ancestral homes in a brazen act of ethnic cleansing. These are the very Kurds whose militia, the People’s Protection Units, allied with the United States to defeat ISIL in Syria at a time when Turkey displayed an incredible insouciance toward the murderous terrorist cult. Turkey also brought into the Kurdish region hard line fundamentalist militias, some of whose leaders have ties to al-Qaeda, and these militias stand accused of committing murders and atrocities against the Kurds, whom they view as infidels because of their secular socialism. Even Sen. Lindsay Graham, who has his head so far up Trump’s ass he knows what he had for lunch, fiercely protested the Turkish invasion. The Senate plans sanctions against Turkey over this issue, though Ankara seems undeterred.

2. Turkey insisted on buying the S-400 anti-aircraft system from Russia, and deliveries started last June. Turkey increasingly does not trust the United States (in part over the Kurdish issue), NATO allies like Greece and Italy, or frenemies like Israel, as Ali Demirdas at the National Interest argues.So Ankara wants an independent anti-aircraft system that could deal with an attack from any of these three, and the spare parts for which the US could not just close off.

Turkey is also slated to receive 100 advanced F-35 fighter jets from the United States, which it helped manufacture. The problem is that if the S-400 is operated together with the F-35 in the same weapons array, the S-400 could learned things about the F-35 that the US doesn’t want the Russians to know. But they would. So the US is threatening not to let Turkey have the F-35 if it insists on sticking to the S-400. Trump did not achieve any tangible progress on this crisis, and just lazily announced that a solution would be found.

3. Turkey is not on board with Trump’s maximum pressure campaign of economically strangling Iran, and a major Turkish bank, Turkiye Halk Bankasi, may suffer enormous fines at the hands of the US Treasury Department for laundering money for Iran. Erdogan does not want that to happen. Trump is sure it can all be worked out.

4. Turkey is extremely impatient with the Israeli policy of keeping the Palestinian stateless, depriving them of basic human rights, and, in Gaza, placing an economic blockade on them. Before 2002, when Turkey had been ruled by Kemalist secularists, Ankara seemed uninterested in the fate of the Palestinians. But the pro-Islam ruling Justice and Development Party (AKP) has taken up the Palestinian cause, at least as rhetoric. The US backs Israel 110%, and some in Congress among the Israel lobbies are beginning to want to take Trump down.

Turkey’s position in geopolitics is changing rapidly, and Turkish government officials have begun peddling outlandish conspiracy theories about the U.S. Even though Erdogan’s hold over Trump seems secure (is it the Istanbul Trump Tower hotel and its profits?) Turkey’s relationship with Congress is in tatters.