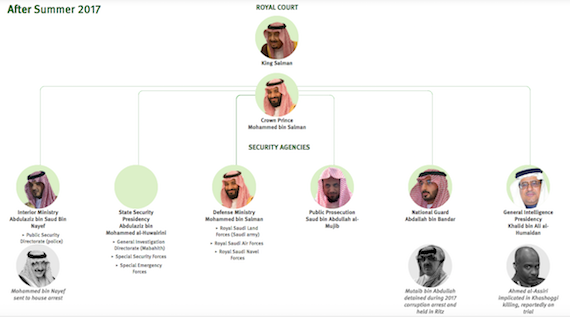 The 62-page report, “‘The High Cost of Change’: Repression Under Saudi Crown Prince Tarnishes Reforms,” documents ongoing arbitrary and abusive practices by Saudi authorities targeting dissidents and activists since mid-2017 and total lack of accountability for those responsible for abuses. Human Rights Watch found that despite landmark reforms for Saudi women and youth, ongoing abuses demonstrate that the rule of law in Saudi Arabia remains weak and can be undermined at will by the country’s political leadership.

The High Cost of Change

“Mohammed bin Salman has created an entertainment sector and allowed women to travel and drive, but Saudi authorities have also locked away many of the country’s leading reformist thinkers and activists on his watch, some of whom called for these very changes,” said Michael Page, deputy Middle East director at Human Rights Watch. “A truly reforming Saudi Arabia would not subject its leading activists to harassment, detention, and mistreatment.”

The report is based on interviews with Saudi activists and dissidents since 2017, government statements, and court documents, as well as exhaustive reviews of Saudi local media outlets and social media.

In June 2017, Saudi Arabia’s King Salman appointed his son, Mohammed bin Salman, crown prince, making him next in line to the Saudi throne and the country’s day-to-day ruler. His elevation coincided with positive changes, fostering a positive image for the crown prince on the international political scene.

Behind the glamor and pomp and the advancements for Saudi women and youth, however, lay a darker reality, as the Saudi authorities moved to sideline anyone who could stand in the way of Mohammed bin Salman’s political ascension. In the summer of 2017, around the time of his promotion to crown prince, authorities quietly reorganized the country’s prosecution service and security apparatus, the primary tools of Saudi repression, and placed them directly under the royal court’s oversight. 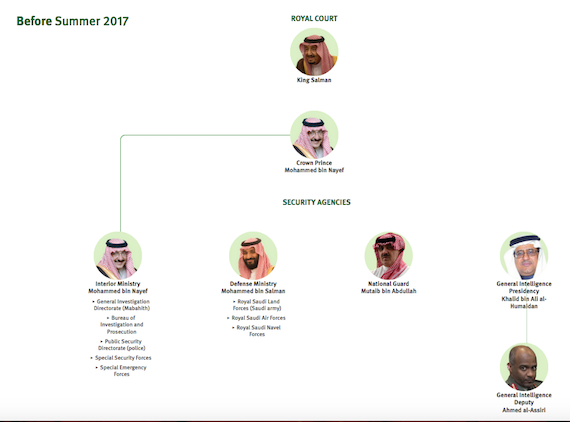 The authorities then began a series of arrest campaigns. They targeted prominent clerics, public intellectuals, academics, and human rights activists in September 2017, leading businesspeople and royal family members accused of corruption in November 2017, and the country’s most prominent women’s rights advocates beginning in May 2018. The arrest waves were often accompanied by defamation and slander of those arrested in the country’s pro-government media.

Detaining citizens for peaceful criticism of the government’s policies or human rights advocacy is not new in Saudi Arabia, but what has made the post-2017 arrest waves notable is the sheer number and range of people targeted over a short period, and new repressive practices.

These include holding people at unofficial detention sites, such as so-called corruption detainees held at the five-star Ritz-Carlton hotel in Riyadh from late 2017 into early 2018, and the prominent women’s rights activists held at what they described as a “hotel” or “guesthouse” during the summer of 2018. Allegations have emerged of rampant torture and mistreatment at those sites.

Abusive practices also have included long-term arbitrary detention – two years in some cases – without charge, trial, or any clear legal process. Some of the so-called corruption detainees arrested in late 2017 remain in detention without charge or trial, including Turki bin Abdullah, the son of the late King Abdullah and former governor of Riyadh, and Adel al-Fakih, a former government minister.

Other abusive practices have included extorting financial assets in exchange for releasing detainees, outside of any legal process, and seeking the death penalty for acts that do not resemble recognizable crimes. Saudi prosecutors are currently seeking the death penalty against a reformist religious thinker, Hassan Farhan al-Maliki, on vague charges relating to the expression of his peaceful religious ideas, and against a well-known cleric, Salman al-Awda, on charges stemming solely from his peaceful political statements, associations, and positions. Both were detained during the September 2017 crackdown.

Saudi Arabia has reportedly used commercially available surveillance technologies to hack into the online accounts of government critics and dissidents. Citizen Lab, an academic research center based in Canada, concluded with “high confidence” that in 2018, the mobile phone of a prominent Saudi activist based in Canada was infected with spyware. It allowed full access to a victim’s personal files, such as chats, emails, and photos, as well as the ability to surreptitiously use the phone’s microphones and cameras to view and eavesdrop.

The repressive side of the crown prince’s domestic record, however, was not given the international scrutiny it deserved until October 2018, when the violent murder of Jamal Khashoggi, the Saudi journalist and Washington Post columnist, at Saudi Arabia’s Istanbul consulate shocked global opinion and led to a broader examination of the human rights situation in Saudi Arabia.

To demonstrate that Saudi Arabia is truly reforming, King Salman and Crown Prince Mohammed bin Salman should introduce new reforms to ensure that Saudi citizens enjoy basic human rights, including freedoms of expression, association, and assembly, as well as an independent judiciary and due process of law.

The authorities can signal this commitment immediately, Human Rights Watch said, by releasing from detention everyone detained arbitrarily or on charges based solely on their peaceful ideas or expression, dropping all charges against dissidents that do not resemble recognizable crimes, and providing justice for abuses such as torture or arbitrary punishments.

“It’s not real reform in Saudi Arabia if it takes place in a dystopia where rights activists are imprisoned and freedom of expression exists just for those who publicly malign them,” Page said.