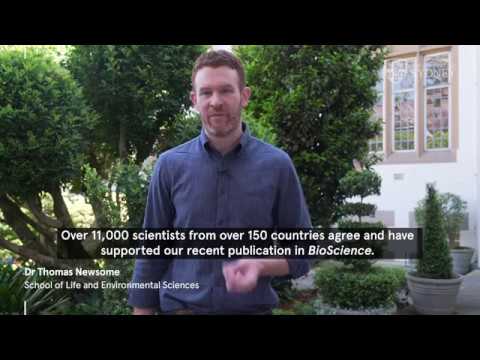 By Thomas Newsome and William Ripple | –

Exactly 40 years ago, a small group of scientists met at the world’s first climate conference in Geneva. They raised the alarm about unnerving climate trends.

Today, more than 11,000 scientists have co-signed a letter in the journal BioScience, calling for urgently necessary action on climate.

This is the largest number of scientists to explicitly support a publication calling for climate action. They come from many different fields, reflecting the harm our changing climate is doing to every part of the natural world.

If you’re thinking not much has changed in the past 40 years, you might be right. Globally, greenhouse gas emissions are still rising, with increasingly damaging effects.

Much of the focus to date has been on tracking global surface temperatures. This makes sense, as goals like “prevent 2℃ of warming” create a relatively simple and easy-to-communicate message.

However, there’s more to climate change than global temperature.

In our paper, we track a broader set of indicators to convey the effects of human activities on greenhouse gas emissions, and the consequent impacts on climate, our environment, and society.

Troubling signs over the past 40 years

The concurrent trends on the actual impacts of climate change are equally troubling. Sea ice is rapidly disappearing, and ocean heat, ocean acidity, sea level, and extreme weather events are all trending upwards.

These trends need to be closely monitored to assess how we are responding to the climate emergency. Any one of them could hit a point of no return, creating a catastrophic feedback loop that could make more regions of Earth uninhabitable.

The need for better reporting

We urge national governments to report on how their own results are trending. Our indicators will allow policymakers and the public to better understand the magnitude of this crisis, track progress, and realign priorities to alleviate climate change.

Some of the indicators could even be presented monthly to the public during news broadcasts, as they are arguably more important than the trends in the stock exchange.

It’s not too late to act

In our paper we suggest six critical and interrelated steps that governments, and the rest of humanity, can take to lessen the worst effects of climate change:

We recognise that many of these recommendations are not new. But mitigating and adapting to climate change will entail major transformations across all six areas.

How can you help?

We are encouraged by a recent global surge of concern. Some governments are declaring climate emergencies. Grassroots citizen movements are demanding change.

As scientists, we urge widespread use of our indicators to track how changes across the six areas above will start to change our ecosystem trajectories.