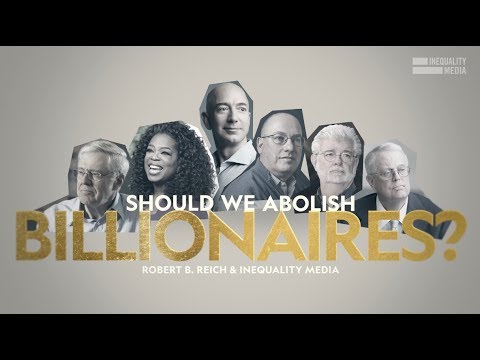 The wealthiest Americans dominate our airwaves. Let’s hear from someone else for a change.

Bill Gates wants you to know he pays taxes.

“I’ve paid more than $10 billion in taxes. I’ve paid more than anyone in taxes,” Gates told journalist Andrew Ross Sorkin. “But when you say I should pay $100 billion, OK, then I’m starting to do a little math about what I have left over.”

Supposedly Gates was talking about a wealth tax 2020 candidates have supported. But no plan yet proposed would seize $100 billion from the philanthro-capitalist anytime soon. Even if it did, he’d still be one of the richest men in the world, with $7 billion left over.

Gates isn’t the only billionaire who’s worried. JPMorgan Chase CEO Jamie Dimon also has concerns about the rising resentment towards his fellow elites.

“I think you should vilify Nazis,” Dimon told Lesley Stahl, “but you shouldn’t vilify people who worked hard to accomplish things.” Billionaire investor Leon Cooperman, who’s become a fixture on CNBC, recently teared up while complaining about the “vilification of billionaires.”

Why do the feelings of the 600 Americans that constitute our billionaire class suck up so much media attention?

For one thing, billionaires literally own the news. Buying up media companies is a new rite of passage for the ultra wealthy, like the purchase of the Washington Post by Amazon head Jeff Bezos, or TIME by tech CEO Marc Benioff.

They’ll say they’re all about editorial independence, but the truth is billionaire ownership can affect news output. When billionaire Joe Ricketts found out the staff of DNAinfo, a network of city-based news sites he owned, was unionizing, he promptly shut down the entire venture out of spite.

There are more subtle ways in which the rich buy media access. The Gates Foundation, for example, has poured millions in donations into the media over the last several years to raise awareness around the foundation’s philanthropic goals — including its controversial funding of charter schools.

Not all billionaire power is publicly broadcast, however.

In their book Billionaires and Stealth Politics, researchers Benjamin Page, Jason Seawright, and Matthew J. Lacombe document how economic elites have banded together to lobby for extremely conservative policies, like cutting estate taxes, opposing regulations on the environment and Wall Street, and gutting social programs.

Because these moves are highly unpopular, they’ve done this work in the background.

That means there’s a network of billionaires aligned with the Koch brothers, who’ve poured hundreds of millions of dollars into anti-labor policies. And Rupert Murdoch, the media mogul who changed the media landscape with Fox News. And casino magnate Sheldon Adelson, who’s spending his billions shaping U.S. foreign policy.

Their enormous wealth offers them an outlandishly oversized role in our democracy. It’s poisoning both our politics and our media.

So how about a ban on billionaires? Let’s tax away their wealth, but let’s get them off our airwaves, too. Imagine what we’d learn if corporate media didn’t devote entire news cycles to the whims of the rich.

You may not have heard, but for the last several months, the sanitation workers at Republic Services have been fighting for higher wages. “I haven’t had a raise since 2004,” Demetrius Tart told The Guardian. Meanwhile, the company is making a killing from the 2017 tax cuts, and returned more than $1 billion to shareholders through stock buybacks.

The company’s largest shareholder? Bill Gates. Workers took their fight directly to the billionaire, protesting outside a Gates Foundation event in September with signs that read, “Bill Gates treats his workers like garbage.” He ignored them.

Maybe these sanitation workers could get the airtime instead.

Negin Owliaei is an inequality researcher at the Institute for Policy Studies and a co-editor of Inequality.org.

Robert Reich: Should We Abolish Billionaires?