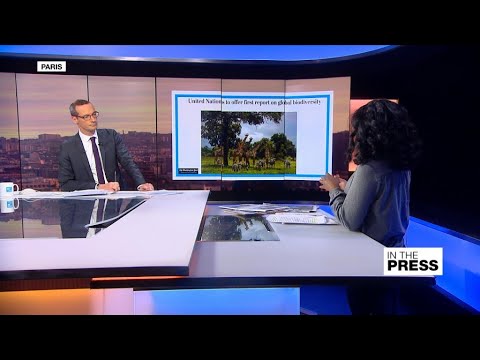 Over the last 30 years, though, geologists have been delving deeper into the end-Guadalupian, widely known as a distinct crisis.

Now, scientists are arguing that this ancient annihilation was huge enough to rank among the pantheon of previous apocalypses, and they suggest renaming the group of major extinction events as the Big Six.

There have been many setbacks in history, but by studying the biggest ones, experts can begin to unearth patterns and seek common causes.

Increasing evidence suggests that many global extinction events were linked with oxygen-depletion in the oceans, and the end-Guadalupian fits this.

“I think there’s a problem with hanging on to the number five,” said Richard Bambach, a marine palaeoecologist and professor emeritus of paleontology at Virginia Tech who was a reviewer on the landmark Sepkoski-Raup paper.

The end-Permian came much closer to wiping out the entire life on Earth when based on percentages. However, Bambach said the end-Guadalupian was also shockingly bad for biodiversity.

“If you actually look at the raw numbers, the loss of taxa in the Guadalupian is actually greater than it was in the Permian,” he emphasized.

The end of the Guadalupian epoch is marked by the Emeishan Traps in southwestern China– a monument to a lava flood that exploded in the ocean 260 million years ago.

The event spewed plumes of methane and carbon dioxide that devastated the climate, causing as much as 60% of marine species to die.

Flood basalts like the Emeishan Traps exist all over the planet, and they have been shown to line up with the Big Five.

In the early 1980s, after Luis and Walter Alvarez theorized that a meteor impact wiped out the nonavian dinosaurs, teams of experts searched for evidence of meteor strikes that might explain the other mass extinctions.

Rampino, coming up empty-handed, tried to consider flood basalts, noting that the Deccan Traps in India had developed around the same period as the Chicxulub impact and the end-Cretaceous extinction.

In a similar manner, the End Permian was also marked by even bigger Siberian Traps.

“I went from being an impact man to a volcanism man.”

His research over the last 10 years has focused on correlating flood basalts with the other significant mass extinctions, as well as with periods of oxygen depletion and ocean acidification.

Investigating such correlations was fraught in the 1980s when technologies for dating fossils and rocks were less reliable compared to now.

In the past five years though, advanced radiometric dating methods have given increasingly accurate timestamps for geologic events.

Uranium-lead zircon dating has superseded the much less accurate argon-argon dating, and margins of error that used to span millions of years now span thousands, increasing the data resolution greatly.

With this, geologists can confidently say that the end-Guadalupian lava flood took place within a hundred thousand years– instantaneously in geologic terms– and that it coincided with the extinction crisis shown in the fossil record.

In a study, Rampino and co-author Shu-Zhong Shen of Nanjing University brought together the newest data on the Emeishan Traps and an examination of the ecological severity of the end-Guadapulian extinction to argue for its addition to the Big Six.

The team said ecosystem changes in the end-Guadalupian were dramatic– there was a widespread collapse in huge coral and sponge reefs, as well as other organisms that built shells out of calcium carbonate, which would have dissolved in the acidic water.

Paleontologists said there is less knowledge about land casualties, but among them were a group of dinocephalians who were large, thick-skulled proto-mammals.

After the destruction, the dominant seedless ferns were supplanted by seed-bearing gymnosperms like conifers and ginkgoes.

New calculations also clarified the timing of the first and last appearances of species in the fossil record.

Researchers said due to poor dating, many species that had gone extinct in the Guadalupian were mistakenly correlated to the end-Permian, giving it an inflated extinction rate of 95% of marine species, when it was probably around 80%.

Bambach noted that he has some doubts about the study’s analysis of the ecological severity of the End Guadalupian.

Global sea levels reached their lowest during the Guadalupian and rose again after the die-off event– meaning, relatively few Guadalupian reefs are preserved in a rock where paleontologists can access them.

“Some of the disappearances of ecosystems may be simply the deterioration in the quality– or the amount– of the preserved record.”

One exception though is in China, where Shen has been dating marine fossils across the Permian era and refining the biological picture of the Guadalupian.

Still, Bambach agrees with Rampino and Shen that it’s time to include the End Guadalupian to the Big Five.

“It does rank right up there with the big ones.”

“The modern loss of species diversity has been labeled the ‘sixth extinction’ subsequent to the five major mass extinctions widely recognized in the Phanerozoic geologic record – the end-Ordovician (443.8 Ma), the Late Devonian (372.2 Ma), end-Permian (251.9 Ma), end-Triassic (201.4 Ma) and end-Cretaceous (66 Ma) events. Rankings in terms of numbers of genera suffering extinction, and especially in terms of ecological impact, however, put the end-Guadalupian (end-Capitanian) (259.8 Ma) extinction event in the same category with the other major mass extinctions. Thus, there were apparently six major Phanerozoic mass extinctions, and the current loss of species should perhaps be called the ‘seventh extinction’.”

Julie Celestial: A young blood with an old soul, Julie is fascinated with skies, stars, and every speck of dust in the universe. You can contact her at julie@watchers.news.