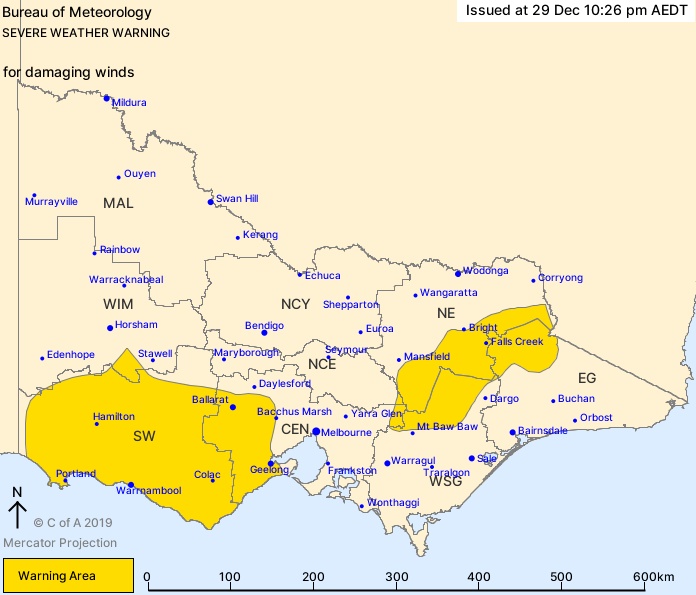 (Via The Watchers ) – Authorities of the Australian state of Victoria have ordered more than 30 000 residents and tourists in East Gippsland to leave the region immediately as bushfires have reached an extreme danger level. Dangerous fire conditions are expected across the state today and tomorrow, BOM said, with very hot temperatures in the forecast followed by strong and gusty NW’ly winds expected to develop on Monday afternoon (LT), December 30. A severe weather warning has been issued.

“We are asking you to now leave East Gippsland from that area, east of Bairnsdale, along the coast there, into the parks, into the forest,” Crisp told reporters.

“You should not be there tomorrow, and we want you to get out now!”

There are 3 significant fires burning today in the forest in East Gippsland — near Bruthen, Buchan and Bonang. “It is likely that these fires will impact communities tomorrow when the weather is forecast to be very hot, dry and with strong gusty winds,” Vic Emergency said in today’s media release.

“Under these weather conditions the fires in East Gippsland will grow significantly in size and it is possible that they will burn from the forest towards the coast, potentially crossing the Princes Highway. If this happens the Princes Highway will be closed for some time. Tomorrow’s extreme fire and weather conditions also means there is a risk of new fire starts as a result of dry lightning. Any lightning strikes in dry, drought-affected forests have the potential to quickly become fires that threaten lives and homes.” 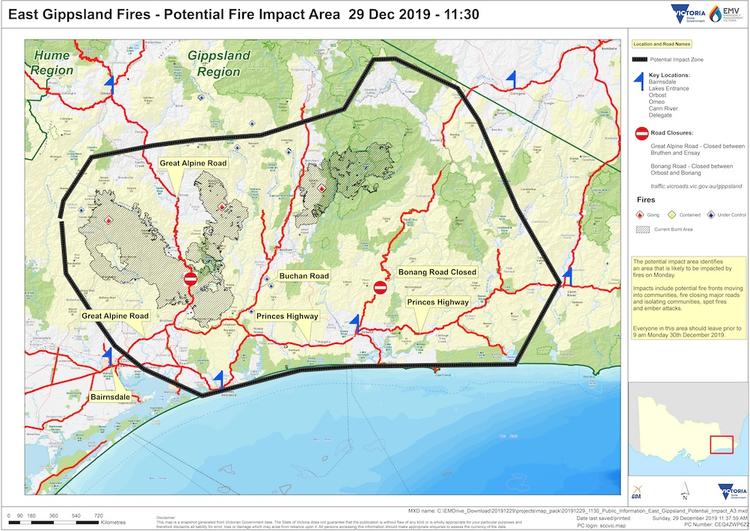 A severe weather warning has been issued ahead of a cold front and associated trough expected to cross Victoria on Monday afternoon and evening. Strong and gusty north to northwesterly winds will shift squally southwest to southerly following the change.

Winds will ease around an hour after the cooler southwest to southerly change moves through.

Isolated thunderstorms over remaining districts, mainly with and following the change, also have the potential of producing wind gusts of 100 km/h (62 mph) which could lead to localized dust storms. Separate warnings will be issued for these thunderstorms as required.

Locations which may be affected include Hamilton, Warrnambool, Portland, Ballarat, Geelong, Mt Hotham and Falls Creek.