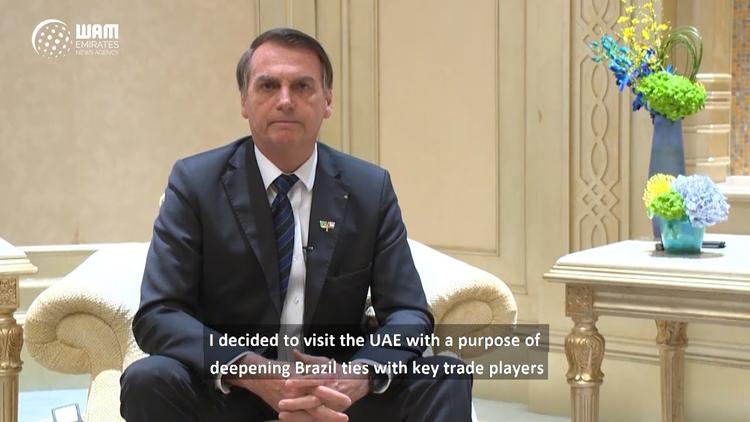 Sao Paulo (Special to Informed Comment) – Beef, oil and veiling and a murdered journalist have catapulted the burgeoning relationship between Brazil and the controversial Kingdom of Saudi Arabia into the headlines for the first time this fall, though the two countries have had formal diplomatic relations since 1968. The United States decided not to lift the ban on Brazil’s beef imports in November because of concerns about corruption in its health department and the safety of the product. In contrast, Saudi Arabia has now approved more than ten Brazilian beef exporting plants and recently-elected President Jair Bolsonaro has been forming close ties with Saudi Crown Prince Mohammed bin Salman since his visit in October.

The commodities market sees this step by the president towards a stronger alliance with Saudi Arabia as a very important strategic move. Many journalists and human rights activists, however, have criticized Mr. Bolsonaro for praising the Saudi Prince. They accuse the Saudi government of having ordered the murder of Saudi journalist Jamal Khashoggi and of promoting a “gender apartheid” in the country, where women are relegated to subordinate positions and do not have the same rights as men. The Brazilian government has not responded to the accusations.

President Bolsonaro’s visit to Riyadh last October and his warm embrace of Crown Prince Mohammed Bin Salman has a definite economic upside. The Brazilian chicken processor BRF has announced its intention to fulfill at least 60% of Saudi Arabia’s demand for halal chicken, and the Saudi Kingdom also claimed that its public investment fund will invest $10 billion in Brazil. in order to deepen their relations and therefore make it its largest partner in Latin America. (Chinese investment still dwarfs that of Saudi Arabia, with a November pledge by Beijing to put $100 billion into Brazil.)

After his State visit to Riyadh, President Bolsonaro told the press that Brazil had even received “an informal invitation” to join the Organization of the Petroleum Exporting Countries (OPEC), which was enough to raise expectations and lift the spirits of those interested in the upcoming Petrobras auctions the government might promote in the future. Minister of Economy Paulo Guedes’ plan to privatize the country’s largest petroleum corporation has received both thumbs up (especially from the Bolsonaro administration) and criticism from people who think the current government is trying to “sell” Brazil to countries such as China, Russia, Saudi Arabia and the United States. Regardless of such criticism, Brazilian stock market BOVESPA has reacted postively to the news coming out of President Bolsonaro’s last State visit. Saudi ally the United Arab Emirates has also come on board. Compared to the year before, UAE’s beef imports from Brazil went up 175% in 2019 alone, after agreements began to be outlined by Minister of Agriculture Thereza Cristina.

Embed from Getty Images
TOPSHOT – A protestor waves the Brazilian national flag outside the Duque de Caxias refinery in metroplitan Rio de Janeiro, Brazil, on May 28, 2018, where soldiers have been deployed to guarantee the safe transport of fuel for essential services. – A truckers’ strike paralyzing fuel and food deliveries across Brazil entered an eighth day Monday but with hopes of relief after unpopular President Michel Temer caved in to the strikers’ key demand. Road blockages by truckers remained in place across 21 of the country’s 27 states, G1 news site reported. (Photo by Carl DE SOUZA / AFP) (Photo credit should read CARL DE SOUZA/AFP via Getty Images)

Whereas a decade ago, Brazil would have found itself desperate at being banned from selling beef (one of its top export products) to the United States, it is instead finding fruitful partnerships elsewhere. Aside from Arab countries, China, which is currently in a trade war with the United States, has been also drawing itself closer to Brazil and away from the United States through a series of investments in the agribusiness and industry sector. In addition, Brazil is now the largest producer and exporter of halal meat in the world, and the Latin American country has predominantly-Muslim countries such as Iran, Lebanon, Turkey, Malaysia, the UAE and Saudi Arabia in the list of its top trade partners, not only because of the product’s quality, which was doubted back during the 2017 health department bribery scandal, but also as a side effect of the amicable relations and cultural exchanges of these importing countries with Brazil.

Embed from Getty Images
CHUPINGUAIA, BRAZIL – JUNE 28: Cowboys wrestle a bull before giving it an injection at a cattle feed lot in the Amazon on June 28, 2017 near Chupinguaia, Rondonia state, Brazil. The confinement farm currently holds about 38,000 heads of cattle and employs around 125 full-time workers. At peak capacity the farm dispenses around 900 metric tons of feed to the cattle per day. Brazil is the world’s largest exporter of red meat and poultry and annually exports more than $12 billion per year. Brazil holds 212 million heads of cattle- the largest herd of commercial cattle on the planet. Brazil’s finance minister said he expects the U.S. to remove the ban on importing fresh Brazilian beef soon. (Photo by Mario Tama/Getty Images).

As a matter of fact, Mr. Bolsonaro himself once said that Brazil “can be considered an Arab country”, making an allusion to the large number of Brazilians of Arab descent and to the fact that Brazil currently has the largest Muslim population in Latin America, which some observers put as high as 1.5 million. As of November 21, the Brazilian Senate, with the presence of the Saudi ambassador, reinstalled the Parliamentary Group Brazil-Saudi Arabia, which holds the purpose of developing bilateral relations between the Legislative sectors of both countries and comes exactly a month after President Bolsonaro’s visit to the country in October.

Still, as greatly as this growing relationship seems to succeed at raising economic expectations (especially in the commodities sector), not everything is coming up roses. Mr. Bolsonaro faced heavy criticism back at home after declaring that he and Prince Mohammad bin Salman shared “a good deal of affinity” and that “anyone would like to spend an afternoon with him [the prince], especially women”.

Embed from Getty Images
A protestor wears a mask of depicting Saudi Crown Prince Mohammad Bin Salman with red painted hands next to people holding posters of Saudi journalist Jamal Khashoggi during the demonstration outside the Saudi Arabia consulate in Istanbul, on October 25, 2018. – Jamal Khashoggi, a Washington Post contributor, was killed on October 2, 2018 after a visit to the Saudi consulate in Istanbul to obtain paperwork before marrying his Turkish fiancee. (Photo by Yasin AKGUL / AFP) (Photo credit should read YASIN AKGUL/AFP via Getty Images)

Opposition members, journalists and human rights and feminist activists came to social networks such as Twitter and Facebook to accuse President Bolsonaro, whom they call a “fascist, racist and sexist”, of sympathising with a “heartless murderer who promotes gender apartheid and censures the press”, alluding to the accusations of Prince bin Salman being involved in the killing of Washington Post’s journalist Jamal Khashoggi. Most of the international community believes that the assassination was ordered by the Saudi crown prince, which led Brazilian-Lebanese journalist Guga Chacra to comment that “President Bolsonaro would do well to question the bloodthirsty, murderous Saudi dictator with whom he is reunited about the reasons why feminist activist Loujain Al-Hathloul was arrested and tortured in Saudi Arabia” and that “it is a shame that Ocidental democratic countries still meet the de facto Saudi dictator during summits”.

Nor is Chacra alone in these sentiments, though President Bolsonaro is notorious for his contempt toward the press. The Brazilian leader, faced with the possibility of developing economic and political ties with a rich state such as Saudi Arabia, clearly cares little about the reputational downside of associating with leaders who hold dubious reputations.