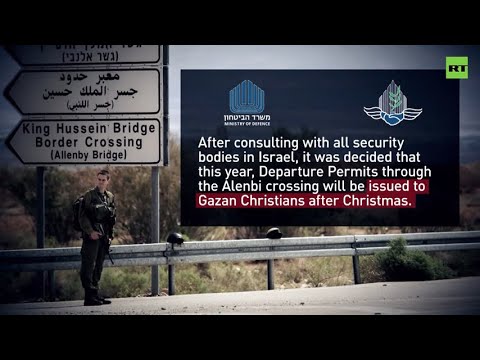 N.B. The day after we published this piece, the Israeli government reversed itself and issued permits to Gaza Christians to visit their holy sites at Christmas. Unfortunately, they haven’t reversed themselves about patient exit visas for medical care or the other blockade measures.

Since Jesus was the first Palestinian Christian, it is ironic that they cannot even get to Bethlehem.

Despite the racist American tendency to paint all 2 million people living in Gaza as “terrorists,” including the plurality of toddlers, there is not actually any security concern in letting Gaza Christians transit through Israel proper to Bethlehem and Jerusalem. Israel has gotten a black eye from publicity about how it has savagely repressed weekly demonstrations in Gaza for the last 18 months, and this sort of pettiness is the revenge of officialdom.

The ban on Christmas travel is emblematic of Israel’s illegal blockade of civilians in Gaza, which imposes severe restrictions on Palestinian rights of free movement, and even impedes travel for medical treatment.

“So far this year, roughly half of applications for patient companion permits were rejected or left unanswered by Israel, according to the World Health Organization. That has forced over 600 patients, including some dozen children under 18, to make the trek out of the territory alone or without close family by their side.”

Pre-British Palestine resembled Lebanon in having a substantial Christian population, perhaps as much as a fifth (That is probably only a little less than the current proportion of Christians in Lebanon). Christian Palestinians, however, find it easier to emigrate to the West than the Muslims, and so the miseries of Israeli Occupation and the conflicts it produces have encouraged them to vote with their feet. Nevertheless, Palestinian Christians have been among the more important Palestinian nationalists.

One of the unstated purposes of constant Israeli mistreatment of the Palestinians is a vain hope of forcing them to emigrate en masse. Since Palestinians between the Jordan and the Mediterranean now equal the number of Jews, this attempt at slow ethnic cleansing has so far not exactly worked in general. But for the Palestinian Christian minority, it has had some success.

The Secretary-General of The Evangelical Alliance of South Africa (TEASA) Secretary-General, Reverend Moss Nthla, reacted to the Gaza Christian ban, saying “As Christians, we need to change our role as unwitting collaborators with the oppression of Palestinian people. We must inform and equip ourselves to be part of a solution that has as its aim a just peace in Palestine, rather than being part of the problem.”

If only American evangelicals, who are mostly captives of the idolatry of Christian Zionism, felt that way about it.