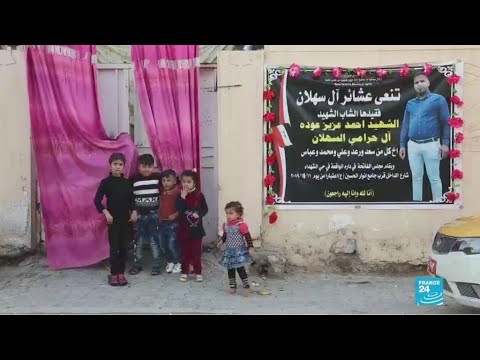 As the PM announces his resignation, Iraqis continue to demand the withdrawal of the crony capitalism implemented by US backed government officials.

As Americans sat down to Thanksgiving dinner, Iraqis were mourning 40 protesters killed by police and soldiers on Thursday in Baghdad, Najaf and Nasiriyah. Nearly 400 protesters have been killed since hundreds of thousands of people took to the streets at the beginning of October. Human rights groups have described the crisis in Iraq as a “bloodbath,” Prime Minister Abdul-Mahdi has announced he will resign, and Sweden has opened an investigation against Iraqi Defense Minister Najah Al-Shammari, who is a Swedish citizen, for crimes against humanity.

According to Al Jazeera, “protesters are demanding the overthrow of a political class seen as corrupt and serving foreign powers while many Iraqis languish in poverty without jobs, healthcare or education.” Only 36% of the adult population of Iraq have jobs, and despite the gutting of the public sector under US occupation, its tattered remnants still employ more people than the private sector, which fared even worse under the violence and chaos of the US’s militarized shock doctrine.

Western reporting conveniently casts Iran as the dominant foreign player in Iraq today. But while Iran has gained enormous influence and is one of the targets of the protests, most of the people ruling Iraq today are still the former exiles that the US flew in with its occupation forces in 2003, “coming to Iraq with empty pockets to fill” as a taxi-driver in Baghdad told a Western reporter at the time. The real causes of Iraq’s unending political and economic crisis are these former exiles’ betrayal of their country, their endemic corruption and the US’s illegitimate role in destroying Iraq’s government, handing it over to them and maintaining them in power for 16 years.

The corruption of both US and Iraqi officials during the US occupation is well documented. UN Security Council resolution 1483 established a $20 billion Development Fund for Iraq using previously seized Iraqi assets, money left in the UN’s “oil for food” program and new Iraqi oil revenues. An audit by KPMG and a special inspector general found that a huge proportion of that money was stolen or embezzled by US and Iraqi officials.

Lebanese customs officials found $13 million in cash aboard Iraqi-American interim Interior Minister Falah Naqib’s plane. Occupation crime boss Paul Bremer maintained a $600 million slush fund with no paperwork. An Iraqi government ministry with 602 employees collected salaries for 8,206. A US Army officer doubled the price on a contract to rebuild a hospital, and told the hospital’s director the extra cash was his “retirement package.” A US contractor billed $60 million on a $20 million contract to rebuild a cement factory, and told Iraqi officials they should just be grateful the US had saved them from Saddam Hussein. A US pipeline contractor charged $3.4 million for non-existent workers and “other improper charges.” Out of 198 contracts reviewed by the inspector general, only 44 had documentation to confirm the work was done.

US “paying agents” distributing money for projects around Iraq pocketed millions of dollars in cash. The inspector general only investigated one area, around Hillah, but found $96.6 million dollars unaccounted for in that area alone. One American agent could not account for $25 million, while another could only account for $6.3 million out of $23 million. The “Coalition Provisional Authority” used agents like these all over Iraq and simply “cleared” their accounts when they left the country. One agent who was challenged came back the next day with $1.9 million in missing cash.

The US Congress also budgeted $18.4 billion for reconstruction in Iraq in 2003, but apart from $3.4 billion diverted to “security,” less than $1 billion of it was ever disbursed. Many Americans believe US oil companies have made out like bandits in Iraq, but that’s not true either. The plans that Western oil companies drew up with Vice President Cheney in 2001 had that intent, but a law to grant Western oil companies lucrative “production sharing agreements” (PSAs) worth tens of billions per year was exposed as a smash and grab raid and the Iraqi National Assembly refused to pass it.

Finally, in 2009, Iraq’s leaders and their US puppet-masters gave up on PSAs (for the time being…) and invited foreign oil companies to bid on “technical service agreements” (TSAs) worth $1 to $6 per barrel for increases in production from Iraqi oilfields. Ten years later, production has only increased to 4.6 million barrels per day, of which 3.8 million are exported. From Iraqi oil exports of about $80 billion per year, foreign firms with TSAs earn only $1.4 billion, and the largest contracts are not held by US firms. China National Petroleum Corporation (CNPC) is earning about $430 million in 2019; BP earns $235 million; Malaysia’s Petronas $120 million; Russia’s Lukoil $105 million; and Italy’s ENI $100 million. The bulk of Iraq’s oil revenues still flow through the Iraq National Oil Company (INOC) to the corrupt US-backed government in Baghdad.

Another legacy of the US occupation is Iraq’s convoluted election system and the undemocratic horse-trading by which the executive branch of the Iraqi government is selected. The 2018 election was contested by 143 parties grouped into 27 coalitions or “lists,” plus 61 other independent parties. Ironically, this is similar to the contrived, multi-layered political system the British created to control Iraq and exclude Shiites from power after the Iraqi revolt of 1920.

Today, this corrupt system keeps dominant power in the hands of a cabal of corrupt Shiite and Kurdish politicians who spent many years in exile in the West, working with Ahmed Chalabi’s US-based Iraqi National Congress (INC), Ayad Allawi’s UK-based Iraqi National Accord (INA) and various factions of the Shiite Islamist Dawa Party. Voter turnout has dwindled from 70% in 2005 to 44.5% in 2018.

Ayad Allawi and the INA were the instrument for the CIA’s hopelessly bungled military coup in Iraq in 1996. The Iraqi government followed every detail of the plot on a closed-circuit radio handed over by one of the conspirators and arrested all the CIA’s agents inside Iraq on the eve of the coup. It executed thirty military officers and jailed a hundred more, leaving the CIA with no human intelligence from inside Iraq.

Ahmed Chalabi and the INC filled that vacuum with a web of lies that warmongering US officials fed into the echo chamber of the US corporate media to justify the invasion of Iraq. On June 26 2002, the INC sent a letter to the Senate Appropriations Committee to lobby for more US funding. It identified its “Information Collection Program” as the primary source for 108 stories about Iraq’s fictitious “Weapons of Mass Destruction” and links to Al-Qaeda in US and international newspapers and magazines.

After the invasion, Allawi and Chalabi became leading members of the US occupation’s Iraqi Governing Council. Allawi was appointed Prime Minister of Iraq’s interim government in 2004, and Chalabi was appointed Deputy Prime Minister and Oil Minister in the transitional government in 2005. Chalabi failed to win a seat in the 2005 National Assembly election, but was later elected to the assembly and remained a powerful figure until his death in 2015. Allawi and the INA are still involved in the horse-trading for senior positions after every election, despite never getting more than 8% of the votes – and only 6% in 2018.

In 2003, the US and its allies unleashed unspeakable, systematic violence against the people of Iraq. Public health experts reliably estimated that the first three years of war and hostile military occupation cost about 650,000 Iraqi lives. But the US did succeed in installing a puppet government of formerly Western-based Shiite and Kurdish politicians in the fortified Green Zone in Baghdad, with control over Iraq’s oil revenues. Many of the ministers in the US-appointed interim government in 2004 are still ruling Iraq today.

US forces deployed ever-escalating violence against Iraqis who resisted the invasion and hostile military occupation of their country. In 2004, the US began training a large force of Iraqi police commandos for the Interior Ministry, and unleashed commando units recruited from SCIRI’s Badr Brigade militia as death squads in Baghdad in April 2005. This US-backed reign of terror peaked in the summer of 2006, with the corpses of as many as 1,800 victims brought to the Baghdad morgue each month. An Iraqi human rights group examined 3,498 bodies of summary execution victims and identified 92% of them as people arrested by Interior Ministry forces.

The US Defense Intelligence Agency tracked “enemy-initiated attacks” throughout the occupation and found that over 90% were against US and allied military targets, not “sectarian” attacks on civilians. But US officials used a narrative of “sectarian violence” to blame the work of US-trained Interior Ministry death squads on independent Shiite militias like Muqtada al-Sadr’s Mahdi Army.

The government Iraqis are protesting against today is still led by the same gang of US-backed Iraqi exiles who wove a web of lies to stage manage the invasion of their own country in 2003, and then hid behind the walls of the Green Zone while US forces and death squads slaughtered their people to make the country “safe” for their corrupt government.

More recently they again acted as cheerleaders as American bombs, rockets and artillery reduced most of Mosul, Iraq’s second city, to rubble, after twelve years of occupation, corruption and savage repression drove its people into the arms of the Islamic State. Kurdish intelligence reports revealed that more than 40,000 civilians were killed in the US-led destruction of Mosul. On the pretext of fighting the Islamic State, the US has reestablished a huge military base for over 5,000 US troops at Al-Asad airbase in Anbar province.

The cost of rebuilding Mosul, Fallujah and other cities and towns is conservatively estimated at $88 billion. But despite $80 billion per year in oil exports and a federal budget of over $100 billion, the Iraqi government has allocated no money at all for reconstruction. Foreign, mostly wealthy Arab countries, have pledged $30 billion, including just $3 billion from the US, but very little of that has been, or may ever be, delivered.

The history of Iraq since 2003 has been a never-ending disaster for its people. Many of this new generation of Iraqis who have grown up amid the ruins and chaos the US occupation left in its wake believe they have nothing to lose but their blood and their lives, as they take to the streets to reclaim their dignity, their future and their country’s sovereignty.

The bloody handprints of US officials and their Iraqi puppets all over this crisis should stand as a dire warning to Americans of the predictably catastrophic results of an illegal foreign policy based on sanctions, coups, threats and the use of military force to try to impose the will of deluded US leaders on people all over the world.

Nicolas J S Davies is an independent journalist, a researcher for CODEPINK and the author of Blood On Our Hands: the American Invasion and Destruction of Iraq.