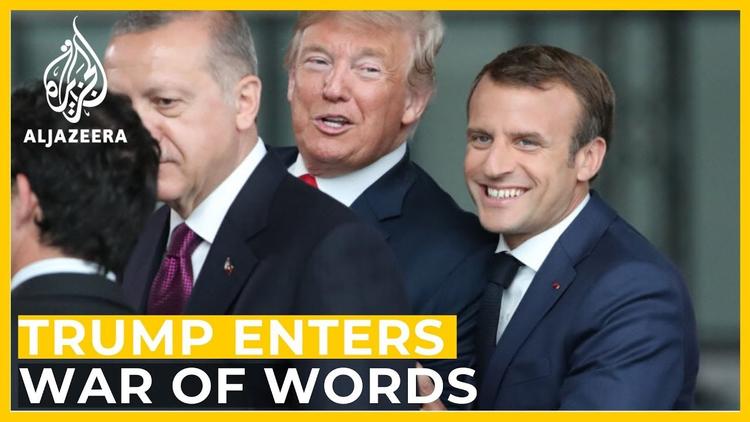 Ann Arbor (Informed Comment) – The 70th anniversary of NATO was commemorated with a low-key meeting rather than a summit and was not the united show of success hoped for by Secretary-General Jens Stoltenberg, reports Al Jazeera. Turkish President Tayyip Erdogan made waves. And a CBC camera crew caught some NATO leaders, including Canada’s Justin Trudeau and the UK’s Boris Johnson having a laugh about the pretzels in which Trump’s unpredictability ties his staff.

But as much as Trump was an odd man out for his demands that NATO members all spend 2% of their government budgets on their war budgets, the confrontation between French president Emmanuel Macron and Turkish president Erdogan was more dramatic.

The European members of NATO were deeply disturbed by the Turkish invasion of the Kurdish regions of Syria this fall and Trump’s abrupt withdrawal of US special operations troops from that region as the US president greenlighted the Turkish invasion. French, British and other NATO air forces participated extensively in the assault on ISIL, giving support to the Kurdish YPG (People’s Protection Units) in their campaign to take Raqqa and Deir al-Zor and to end the ISIL terrorist organization’s state.

Macron complained last month that the unilateral Turkish invasion of the Kurdish region of Syria in contradiction to the interests of the European NATO members meant that NATO is “brain dead.”

For his part, the pugilistic Erdogan insisted that NATO recognize the YPG as a terrorist organization, which is how he sees them (or how he says he sees them).

NATO is also upset with Turkey for purchasing the S-400 Russian anti-aircraft system. When operated in proximity to sophisticated US and NATO military weaponry, the S-400 and its Russian engineers could sweep up technological secrets for Russia.

Macron said, “When I look at Turkey they are fighting against those who fought with us shoulder to shoulder against ISIS (Islamic State) and sometimes they work with ISIS proxies. I think any ambiguity with Turkey vis-a-vis these groups is detrimental to everybody for the situation on the ground . . . “The number one (priority) is not to be ambiguous with these groups, which is why we started to discuss our relations with Turkey.”

Macron is afraid that the Turkish invasion of northern Syria and the consequent disarray of the YPG has allowed ISIL to regroup and increased the danger of their resurgence.

Some 1,700 French Muslims went off and joined ISIL (a miniscule number given the millions of French Muslims), but this statistic worries the government and it has refused to take back its citizens among ISIL detainees in northern Syria. In 2015 ISIL-affiliated terrorists launched major attacks in France that shook the country to its core and have left behind a legacy of diminished French civil rights and a powerful strain of Islamophobia both in the government and civil society. Muslims comprise some 9% of the French population.

Turkey’s relative insouciance toward ISIL and its project of destroying the very YPG that defeated ISIL are thus extremely concerning for the French government.

Turkey, a country of about 81 million (the size of Germany), is about 18% Kurdish with the rest mostly Turks. Turks speak an Altaic language (Turkish is related to Mongolian and Manchu in east Asia), while Kurds speak an Indo-European language ultimately related to English. In the 1980s and 1990s a small Kurdish Communist guerrilla group, the Kurdistan Workers Party (PKK) engaged the Turkish military in a dirty war in which brutality on both sides led to some 40,000 deaths.

The Syrian Kurds are not PKK but their Democratic Union Party has similar origins. It turned from Communism after the collapse of the Cold War to embracing cooperatives on the model of Brooklyn social theorist Murray Bookchin. Erdogan is a center-right politician favoring capitalism and Islam, while the Syrian Kurds are cooperativist socialists and relatively secular-minded. Erdogan fears that a successful Syrian Kurdish autonomous state in north Syria would infect Turkish Kurds of that country’s southeast with socialism and separatism, and wants to use ethnic cleansing and population transfers to create human barriers between the Syrian Kurds and Turkish ones.

Turkey is unimpressed that the YPG defeated ISIL, and instead is afraid that the Kurds gained significant military experience and sophisticated weaponry. Turkey did not support ISIL, but wasn’t particularly active in defeating it either, since it put pressure on Turkey’s enemies, the Syrian government of Bashar al-Assad and the Syrian Kurds.

Macron’s charge that Turkey was cooperating with ISIL elements is incorrect. Turkey does back fundamentalist Arab militias now gathered in Idlib, one or two of which have had ties to al-Qaeda. (ISIL split from al-Qaeda in 2012 and the two are at daggers drawn).

As part of its plan for the Turkish border with the Syrian Kurds, Turkey has sent in fundamentalist Arab militias to Kurdish regions, who have been accused of committing war crimes against the Kurdish population.

Erdogan for his part had threatened to hold up NATO plans for Poland and the Baltic states if NATO did not brand the YPG a terrorist organization. In the end, he backed down. NATO did not discuss the Kurdish YPG one way or another.