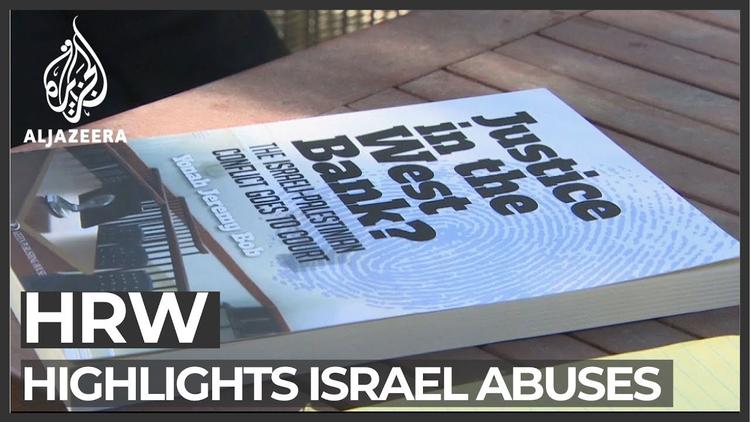 ( Human Rights Watch ) – The Israeli army detained Farid al-Atrash for five days. He wishes it hadn’t affected him so profoundly when authorities crammed him into a crowded cell or transported him to court in a cramped metal enclosure inside a military vehicle. Thousands of Palestinians, after all, have been detained for much longer and treated worse than he was, he says.

Farid was arrested in 2016 for participating in a protest. Now, more than three years later, he’s still awaiting judgment from an Israeli military court. The charges for protesting carry a prison sentence of up to 10 years. If the verdict goes against him, the 42-year-old human rights lawyer and father of three could be back behind bars.

Farid is not alone in facing imprisonment for freely speaking his mind in the West Bank.

Since Israel occupied the West Bank in 1967, it has ruled using military orders issued in those early days. Under those orders, the Israeli army has stripped Palestinians of basic civil rights protections, arresting Palestinian journalists, activists, and others for their anti-occupation speech, activism, and political affiliations. Even if such restrictions might have been justified in the name of security in the early days of the occupation, they don’t fly after more than five decades.

Instead, Israel should grant Palestinians living in the West Bank full protection of their human rights, on par with the rights it grants its own citizens. The law of occupation requires Israel to restore “public life” for the occupied Palestinian population. The longer an occupation, the more military rule should resemble an ordinary governing system. After 52 years of occupation with no end in sight, Israel should allow Palestinians a more normal public and political life, including safeguarding the rights to free speech, assembly, and association.

However, a new Human Rights Watch report, ‘Born Without Civil Rights,’ shows this is far from reality.

Farid, born in Bethlehem, has long spoken out against Israel’s occupation. While well-known in human rights circles, he’s a soft-spoken man who enjoys working behind the scenes. As a lawyer working with the Independent Commission for Human Rights, a quasi-official body of the Palestinian Authority, he documents human rights abuses by the Palestinian Authority and Israel in the West Bank and advocates for change.

He grew up in a refugee camp in Bethlehem and regularly saw soldiers raid the camp and conduct mass arrests, he told Human Rights Watch. Israeli forces detained his grandfather, father, and uncles for protesting, and in 2003, they shot Farid’s younger brother in the spinal cord while he was demonstrating, paralyzing half his body.

Farid came to believe that Palestinians need to struggle for their freedom, so he studied law.

In 2016, he joined more than 100 people in an annual protest demanding the opening of al-Shuhada Street in the heart of the West Bank city of Hebron, near where several hundred Jewish Israeli settlers chose to live.

The street was once home to a bustling Palestinian market. But starting in 1994, the Israeli army slowly began closing the street to Palestinians. The restrictions began after an Israeli settler killed 29 Palestinians praying in a Hebron mosque and intensified following fatal attacks by Palestinians on settlers during the Intifada of the early 2000’s. Over time, the army shuttered windows, welded shut the doors of shops and homes, and turned the street into a “sterile” zone. Today, the army forbids Palestinians from walking down much of the street, while permitting Israeli settlers and tourists to do so. Israel claims the policies that separate the area’s settlers and the Palestinians, which include more than 100 physical obstacles and 21 permanently staffed checkpoints that restrict Palestinian movement, are necessary to protect the settlers living there.

The soldiers put Farid in their jeep, blindfolded him, and had him lay on the floor in the back, he said. One of the security officers slapped him. They took him to Etzion detention center and locked him in a very small room that held 10 people. The mattresses and the blankets were dirty, he said. He was tired, and when he asked the other detainees for a cup of water, they laughed. There were no cups, they told him, you have to drink out of the faucet. The disregard for the dignity of detainees shook him.

After five days in the crowded cell, Farid said he was taken to court in a military transport vehicle called a bosta, often used to transport prisoners. In the bosta he sat on a metal chair, which was inside a narrow metal box. Officers shackled his arms and legs and blindfolded him, then closed the box’s door, and Farid said he heard them locking it. The space was so tight his knees hit the door. There was only one small air hole. Being there was one of the hardest moments of his life, he said – it was like being in a grave.

When they arrived at the military court and he was released from the box, Farid threw up, he said.

Although taking part in peaceful protests is protected by the rights to free speech and assembly, the court leveled numerous charges against Farid, including “incitement” for “attempt[ing] to influence public opinion … in a manner that may harm public order or safety,” citing his chants, “waving Palestinian Authority flags,” and taking part in a protest without a permit. They also charged him with entering a “closed military zone,” assault on a soldier, and interference with a soldier, but furnished no evidence of these offenses other than his non-violent participation in the demonstration. All the offenses carry possible prison time. They released him on bail after five days in detention.

Had he wanted to, Farid could have agreed to a plea deal, and may have been sentenced to time served, something many other Palestinians do. It’s a common dance at the court – after all, 10 to 15 Palestinians on average are arrested daily by Israeli troops, and at any given time, around 5,000 Palestinians are in detention.

Instead, he said he decided to challenge the military courts, which have a near 100 percent conviction rate. He’s innocent of these charges, he said, and he hopes a video taken of his arrest, showing that he left the protest peacefully with an officer, will help his case. Still, soldiers testified against him in the hearings, saying he “interfered” with them, an overly broad charge that could mean anything.

More than three years later, his trial has wrapped up. The verdict remains pending.

These days, Farid still goes to protests. But he no longer stands in the front – he believes he is less likely to be arrested if he hides in the back. His experiences have made him afraid to speak out.

He doesn’t want to feel this way. He wants all Palestinians to have their rights to free speech, assembly, and association protected. But the reality is, Farid has lived his whole life under occupation without having these rights protected, and he’s raising his three daughters under the same oppressive system.

A system that he hopes one day will change.