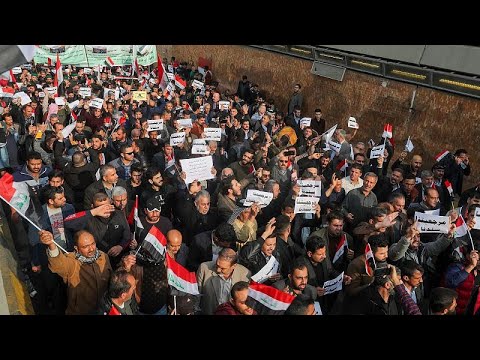 (Niqash.org) – Neither of the two opposing groups seem to want to give any quarter and despite impactful events and legislative manoeuvres, nobody is any closer to common ground. 6.12.2019 | Baghdad Politics

A man in Baghdad’s informal “museum of martyrs”, a memorial to the young demonstrators who have been killed. (photo: صباح عرار:جيتي)

The Iraqi prime minister announced that he would resign. But demonstrations have continued because as those participating say, it is the whole system that they believe is rotten. They want to see changes made to electoral laws and other basic rules. At the same time, Iraq’s political class is insisting on maintaining as much of the status quo as they think they can.

Proposed rules on elections are an example of how far apart the two sides are. The protesters want a new law that would enable genuine representation for voters and they even have a first draft of it, which they are circulating, asking other protest groups elsewhere to give an opinion, via lawyers or constitutional experts. They are seeking comprehensive political change and their new electoral law would make it possible to push Iraq’s established political parties out of power.

In Baghdad, the rules of the game don’t seem to have changed. Nor does there seem to be any acknowledgement that they should.

Meanwhile, Iraq’s parliamentarians are also discussing a new electoral law and they have a draft too. However their draft electoral law is very different from the protesters’ version and appears to have been written with a view to keeping established parties in power. Opinions from outside established political circles – for instance, the protesters’ or the public’s – have not been solicited.

Two factors have made a major impact in the last fortnight: Firstly, the resignation of the prime minister which has been perceived as a victory for the protesters and secondly, the fact that dozens of protesters were killed in Najaf and Nasiriyah. The death are changing general public opinion about the demonstrations.

Memorials have been held all around the country, even in Sunni Muslim-majority cities and provinces, like Mosul, Salahaddin, Diyala and Anbar, where locals did not really protest but instead showed solidarity with the protesters down south in variety of different ways.

Meanwhile in the corridors of power in Baghdad, nothing really seems to have changed. Every time Iraqi politicians select a new prime minister, there are heated discussions, meetings and long negotiations. Multiple names have been suggested for the job and most are part of the long-standing political establishment. In Baghdad, the rules of the game don’t seem to have changed. Nor does there seem to be any acknowledgement that they should.

A few days after prime minister Adel Abdul-Mahdi resigned, Iranian military leader Qassim Soleimani arrived in Baghdad – this too, is according to local political tradition, as Iraq’s allies and neighbours always want a say in the selection of any new leader. And some of the country’s politicians are still doing their best to discredit the protests, saying they were initiated by foreign agents, implying that the demonstrators are guilty of treason.

On the streets of the country, the scene is very different. Protesters are responding to the talk of ongoing negotiations in Baghdad with jokes. They scoff at the idea that the political establishment will remain in power and that a new prime minister will be selected as usual, and that this could even come close to satisfying the demands of the anti-government demonstrators – or that it would make the protesters forget those who have been killed.

Last week, the first rain of winter fell in Baghdad. No doubt the authorities were hoping the watery weather would discourage protesters and that they might return home. Instead they donned raincoats and prepared for a drop in temperature.

Given the intractable positions taken by both sides, how could this deadlock end?

In Iraqi history, major political changes have tended to lead to reprisal and revenge.

Up until now, the protesters have not formed any sort of body that could ostensibly represent them in negotiations with politicians. In some ways, the protesters seem to see this as a strong point. The majority of them are younger men with little or no political experience. There’s such a deep seated distrust of politics that even the protesters fear that, if they elect representatives, these may be susceptible to offers of money or power and that they could “sell the protests out”, as has happened previously in Iraq. Additionally, by not engaging in negotiations, they don’t get caught up in potentially months-long and difficult discussions with a government that is, many of them say, the best at procrastination and delay.

The current administration, and past ones, may have been proven a failure. But most of the demonstrators are not clear on how to remedy this, nor do they know how to prevent the manipulations of Iraq’s politicians. What some might describe as naivete has also been seen – at some demonstrations, protesters have been setting up theatrical scaffolding and “executing” dolls with politicians’ faces on them.

It is not hard to imagine that these kinds of actions – the threat of execution and prosecution – will only make those in power more intransigent. And that is apart from all the other good reasons for politicians’ stubbornness: Well-established parties have been in power in Iraq for 16 years and they will not easily surrender the wealth, position and power they have amassed over that time.

In Iraqi history, major political changes have tended to lead to reprisal and revenge. After the end of Saddam Hussein’s regime and the fall of his nationalist Baath party, Iraq saw several years of bloodshed and violence, with deaths on all sides. Prior to this, Saddam and the Baath party did the same thing when they seized power in the early 1960s, murdering and imprisoning thousands of Iraqis who they considered their enemies. And in 1958, when the Iraqi monarchy was overthrown, members of the Iraqi royal family were also murdered, their bodes dragged down streets or hung from power poles, in scenes that older Iraqis still remember with horror.

A complete overhaul of the current Iraqi system, established in 2003 after the end of Saddam Hussein’s regime, could ostensibly make thousands of political party members, military service people and even civil servants into “the enemy” – perhaps an enemy that will have to be fought. The country’s politicians are only too well aware of this danger. They are trying to prevent any such breakdown but at the same time, they appear to be refusing to make even the smallest concessions to their opponents, who simply carry on, in the country’s’ squares and streets.