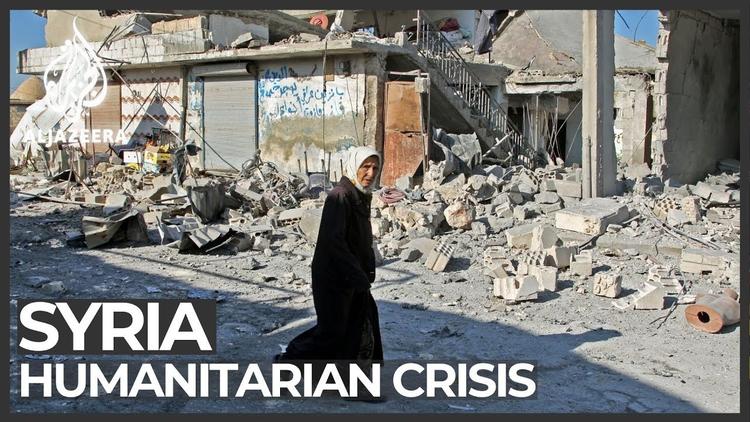 Ann Arbor (Informed Comment) – The campaign to retake parts of Idlib province in northwest Syria by the Russian Aeronspace Forces and the Damascus government of Bashar al-Assad picked back up on Saturday. Two days of cloudy, foggy weather had grounded the Russian Su-24 jet bombers, but yesterday saw clear skies. The Syrian Arab Army has taken 45 villages in eastern and southern Idlib, which is the last province to be controlled by fundamentalist Arab militias.

Russia has especially heavily bombed villages controlled by the Council for Syrian Liberation (HTS), formerly the Jabhat al-Nusra, which Moscow considers to be an al-Qaeda affiliate.

HTS fighters attempted to riposte around Jarjanaz in Idlib on Saturday, but Russian officials said that Syrian Arab Army artillery had forced them back, killing 30 of the fundamentalist fighters without suffering any casualties.

In contrast, Turkey strongly backs the HTS and other Sunni Arab militias in Syria, and had attempted to dissuade Moscow and Damascus from reasserting control over Idlib, which is home to 3 million civilians, most of them displaced from elsewhere in Syria by the civil war. (They are disproportionately conservative Sunni Muslims, though only a small number are militants). In recent weeks, 235,000 of them are alleged by the UN to have fled from eastern and southern Idlib further toward the Turkish border to the north, or in some instances into Turkey itself. Turkey, a country of 80 million, is thought already to host 3.5 million Syrian refugees, and does not want another wave of them that would double the total.

Turkey is alleged to have provided the fundamentalist Arab militias such as the HTS with T.O.W. anti-tank missiles, which have been effective against Syrian Arab Army armor.

Syrian expatriates in Istanbul along with supportive Turks demonstrated in front of the Russian consulate in that city on Saturday, decrying the Russian bombing campaign in Idlib.

Russia and Turkey have what seems to me an extremely odd and conflicted love-hate relationship. It is sort of like the set up to those predictable Hollywood romantic comedies where the couple initially hates each other but then inevitably falls in love. Only, in the Russia-Turkish romance, they never quite stop hating each other. (Maybe this is truer to real life than the Hollywood conceit). The two have extensive bilateral trade ties, and Russia is supplying Turkey with the S-400 anti-aircraft system.

Russia and Turkey, however, are in conflict with one another on two hot fronts, in Syria and Libya.

In Syria, the Russian Aerospace Forces have heavily bombed the rebels in the Syrian civil war, enabling the Baath government of Bashar al-Assad in Damascus to recover most of the country’s territory. The two big swathes yet to fall under al-Assad’s iron grip again are Idlib Province in the northwest and the Kurdish regions of the northeast. The Kurds have been forced to accommodate Damascus more by the Turkish invasion this fall, which pushed the Kurds back from the border as Turkey brought in fundamentalist Arab militias to a 30-mile deep strip on the border between Turkey and Syria.

The other front in the Russo-Turkish conflict is now Libya. The capital, Tripoli, is controlled by a government of national accord with Muslim Brotherhood tendencies. Turkey is sending troops to back it, and is alleged also to be sending Syrian fundamentalist fighters to help the government in Tripoli.

These developments are astonishing if true.

For the past several months, Gen. Khalifa Hiftar has been attempting to take Tripoli (he is based in Benghazi in the east) with the help of Russia, the United Arab Emirates and Egypt. Hiftar’s campaign has become a slow slog, and now it is facing opposition from Turkish troops and their Syrian gurkhas.

At the same time, Russia is supplying Turkey with the S-400 anti-aircraft system, much to the dismay of Turkey’s NATO partners, since the system has extensive electronic espionage capabilities and will likely spill NATO weaponry secrets to Moscow on an unprecedented scale. The Trump administration has threatened to withhold the F-35 from Turkey because of this security vulnerability if Turkey insists on having the S-400.

So the love-hate relationship between Turkey and Russia continues to unfold.