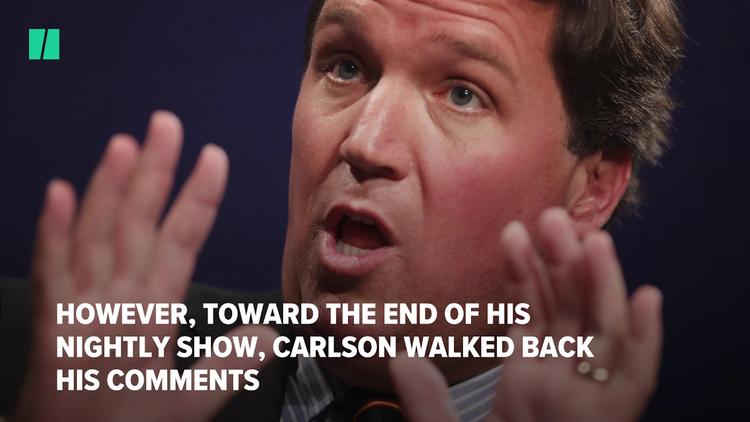 Kremlin Carlson had provoked a firestorm the previous week when he said that he took Russia’s side against Ukraine in the current low-intensity war between the two. When criticized, he said he was joking.

Russia and Ukraine both had legitimate claims to Crimea, and some sort of international mechanism could surely have been found for mediating them. Instead, in 2014 President Vladimir Putin abruptly ordered in the army and militarily occupied the region. Russia then started up a low intensity struggle in eastern Ukraine where there is a large Russian-heritage population, apparently in hopes of annexing more Ukrainian territory.

Post-WW II Europe is committed to peaceful resolution of conflicting border claims and rather frowns on countries behaving the way the Axis used to. Hitler grabbed the Sudetenland from Czechoslovakia precisely on the grounds that it had a big German population that was being oppressed by the doltish Slavs. If Russia is going to go around invading every place with a Russian population, then Kazakhstan and Brighton Beach, New York City, are in big trouble. All the European allies of the US objected strenuously to this Russian aggression and slapped sanctions on Putin’s government. Getting those sanctions removed has been one of Putin’s driving motivations ever since, and one of his hopes in Trump was that he would prove influential enough to get the Magnitzky Act reversed.

Monday night, Kremlin Carlson dismissed concerns that the Russians hacked the Democratic National Committee’s emails or that St. Petersburg troll farms attempted to manipulate social media in favor of Trump in 2016. While Kremlin Carlson is not completely wrong that the Democratic Establishment overplays the Russian role to exonerate Hillary Clinton of running a bad political campaign, he is wrong to rule the Russian efforts irrelevant or a myth.

Here is what the Republican-dominated Senate Select Committee on Intelligence said about the joint FBI/CIA/NSA report (the Intelligence Community Assessment or ICA) on Russian interference:

“The ICA states that:

We assess Russian President Vladimir Putin ordered an influence campaign in 2016 aimed at the U.S. presidential election. Russia’s goals were to undermine public faith in the U.S. democratic process, denigrate Secretary Clinton, and harm her electability and potential presidency. We further assess Putin and the Russian Government developed a clear preference for President-elect Trump.[2]

The Committee found that the ICA provided a range of all-source reporting to support these assessments.

The Committee concurs with intelligence and open-source assessments that this influence campaign was approved by President Putin.

That is the Republican Senate speaking.

Carlson attacked MSNBC’s Chuck Todd for correcting Sen. John Kennedy (R-LA) for saying that Ukraine interfered in the 2016 election. This allegation is based on a conspiracy theory that has been repeatedly and roundly debunked and no US security or intelligence agency has made this claim.

The likely source of this false (and frankly ridiculous) narrative about Ukraine interference is Russian GRU (Main Intelligence Directorate of the military) or the Russian FSB (Federal Security Service).

Which makes it natural that Kremlin Carlson should plump for it. In addition, Carlson accused Todd and other MSNBC journalists of treason to the United States for their stance on Russia. Carlson seems momentarily to have forgotten which country he is a citizen of.

The rest of his screed was a form of whataboutism. What is so bad about Putin, he asked. He pointed to the flaws of US allies such as Saudi Arabia and the United Arab Emirates and went on a rant against China.

Kremlin Carlson doesn’t seem to have gotten the Memo, since Putin has formed an alliance of sorts with China in the Shanghai Cooperation Organization and has just started selling it natural gas. If China is so awful, isn’t Putin awful for propping it up?

Vladimir Putin is objectionable because he tried to throw the last French election to white nationalist Marine LePen and has openly said that he preferred Trump win the presidency. Unless you are a neo-Nazi, you’d have to object to these policies of Putin.

Moreover, Putin is the gravedigger of Russian democracy. Russia had a chance to evolve into a society with press freedom and human rights. It was mainly the machinations of Putin and his clique that repressed journalism and stole elections, turning Russia back toward authoritarianism. Putin has been stealthily nationalizing the Russian banking sector, something that if a Democratic politician in the US did it would send Carlson’s bow tie into a violent spin.

Then there is the unfortunate tendency of Russian journalists and critics of Putin to end up poisoned. One was poisoned by polonium. Only governments have polonium.

Kremlin Carlson is right that other governments such as Saudi Arabia have also done these things, but two wrongs don’t make a right, and saying that Putin is no worse that Mohammad Bin Salman isn’t actually a strong vote of confidence.