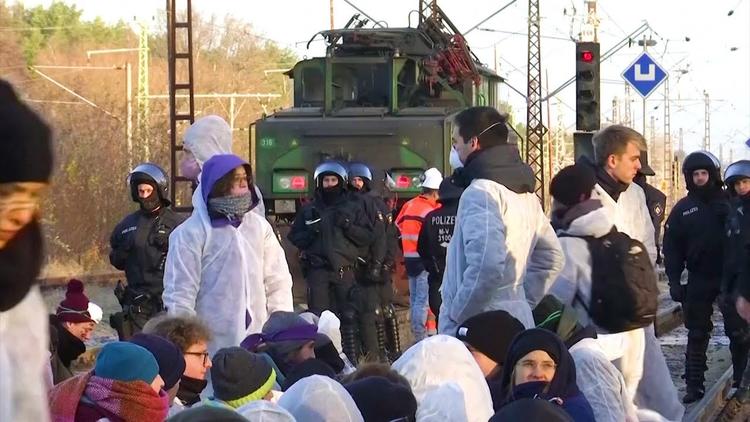 Ann Arbor (Informed Comment) – Deutsche Welle reports that that more than 1,000 green activists made their way past police lines and blocked trains at 3 important coal mines in eastern Germany on Saturday. A few clashes took place between police and protesters.

The environmental group End of the Road claimed more like 4,000 people took part. They targeted for protest the Jänschwalde and Welzow-Süd mines in the state of Brandenburg, and in Saxony, the United Schleenhain mine. Most coal is moved by the rails, hence the attempt to block rail lines.

Brandenburg police said that the protests were largely peaceful. They said the exception was the crowd occupation of the open Jänschwalde mine, where there were some minor clashes with police and three officers were slightly injured. Some 29 were charged with trespassing, and were threatened with prosecution to the full extent of the law by the coal company. Police declined to follow the 500 activists into that mine on the grounds that it could be dangerous, which implies also that the environmentalists were risking their lives.

DW says that the power plant fed by the nearby Jänschwalde mine is one of the most polluting in all of Europe. It is already under a court order to scale back its operations.

End of the Road continued its activities into Saturday night, but did not launch new actions on Sunday, according to RBB24.

These sorts of dramatic protests seem to me the writing on the wall. As the horrific effects of carbon pollution become more and more apparent in fire and flood, drought and pestilence, the general public will mobilize to pressure governments and offset the energy lobbies that now often have a lock on policy decisions. Luckily, End of the Road has decided to pursue the protests nonviolently.

Coal is the most carbon-intensive of the fossil fuels. Germany alone (pop. 82 million) emits 22% of the carbon dioxide put out by the European Union (pop. 512 million), even though it only has 19% of the population. Europe emits 6 billion metric tons of CO2 annually, about the same as North America. Half of all the CO2 in the atmosphere has been put there in the past 40 years.

The protests of End of the Road are against the climate policy of the German Federal government, which does not plan to phase out coal until 2038. The environmentalists argue that it can and should be done much more quickly, but the government is afraid of Big Coal and coal workers. Some of the problem is also geopolitical. Germany has its own coal. It could replace the lost electricity with renewables and natural gas, but more renewables require investments in the grid, and the natural gas would likely come from the Russian Federation and be accompanied by political strings.

Parts per million of CO2 in the atmosphere reached 415 this year, the highest in millions of years. The last time there was that much C02 in the atmosphere, in the Pliocene between 5 and 2 million years ago, seas were as much as 130 feet higher (check the elevation where you live) and temperatures were 10 to 16 degrees F. higher. That means that when the full effect of the carbon dioxide takes effect– when the surface ice melts and even the deep oceans heat up, that is what our world will look like. We perhaps could stop it right now if we went cold turkey and stopped emitting CO2, since the oceans, some soils, and igneous rocks are carbon sinks and would scrub some of the CO2 out of the atmosphere. That margin is our carbon budget, but we are poised to blow right through it. Depending on what we do in the next decade to three decades, it could even get a lot worse. I once read that Swedish geologists had discovered sediments from a time when C02 levels were very high millions of years ago when there had been a 10,000-year-long stationary cyclone over that area. That would be a hell of a storm and I fear it would rather knock out the internet and make driving or just living difficult.