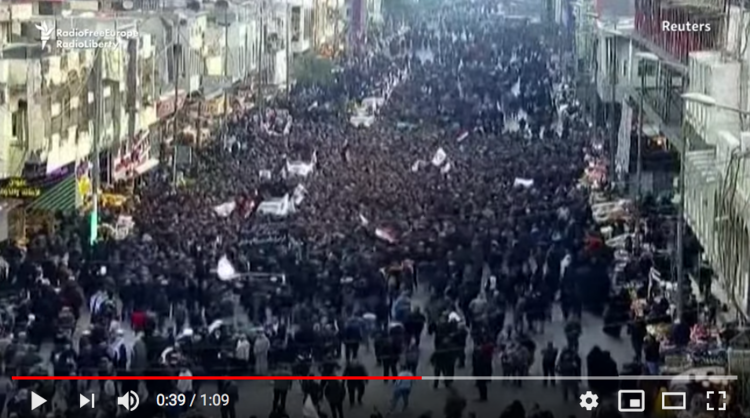 Not only that, but what look to me like hundreds of thousands of Iraqis filled Baghdad’s streets, chanting “Death to America, Death to Israel.” Most of the US press is calling the massive crowds “thousands.” A few grudgingly concede “tens of thousands.” But I’d say that’s at least 100,000, which would make it among the biggest demonstrations in Iraq since 1958. Although Iranians often ritually chant “Death to America” (with less and less genuine conviction until last week), this is not common in Iraq and certainly not on this scale.

RFE/RL: “Funeral Procession Held In Baghdad For Soleimani, Others Killed In Air Strike”

This crowd differed by class, urban geography and age from the youth demonstrators at Tahrir Square, who have adopted an Iraqi nativism and who are chanting against the presence of both Iran and the United States in Iraq. The crowds in Kazimiya and at Hasanain Square were pious Shiites, many likely from the working-class district of Sadr City.

Amid the massive crowd, there were unfurled not only Iraqi flags but also Iranian ones and the banner of the Kata’ib Hizbullah (KH), the paramilitary unit led by the slain Abu Mahdi al-Muhandis. Iraqis are extremely nationalistic, and it isn’t normal to fly an Iranian flag. This was done as a signal of solidarity. 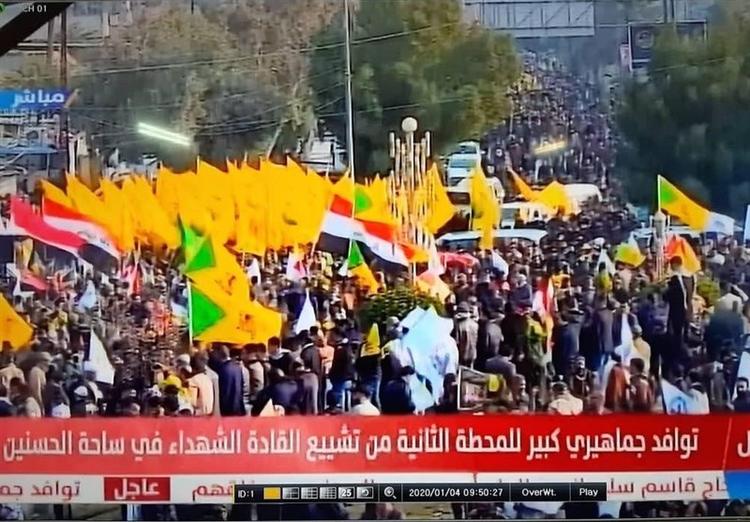 The bodies of the two commanders have an intricate itinerary, first lying briefly in state at Kazimiya in northern Baghdad. Kazimiya or Kazimayn grew up around the shrine of the seventh and ninth Shiite Imams or vicars of the Prophet Muhammad.

Then they were taken to Karbala, the holy city with the shrine to the martyred grandson of the Prophet, Imam Husain (d. 680 AD). There the bodies were greeted by the son of Grand Ayatollah Ali Sistani, the foremost religious authority in Iraq and much of the Shiite world outside Iran itself. Although Sistani has not yet demanded that US troops leave, that he sent his son to this event shows how angry he is at Trump’s violation of Iraqi sovereignty– something for which Sistani has invariably stood.

Having made the point that the two are martyrs in the tradition of Imam Husain, the bodies were then taken to Najaf, the site of the shrine of Imam Ali, the Prophet Muhammad’s son-in-law and first cousin, whom Shiites hold to have been his rightful immediate successor. Ali was assassinated according to Muslim tradition in 661. Again, the two commanders by being brought there were associated with that assassination, which Shiites mourn in their ritual calendar.

Ali’s shrine is so sacred that the cemetery at Najaf became a favorite place for Shiites throughout the centuries to inter their loved ones, and Abu Mahdi al-Muhandis will be laid to rest there.

Soleimani’s remains will then be flown to Iran, for more ceremonies, at which Iranian clerical Leader Ali Khamenei will preside. His eulogy will be a barnburner and will kick off whatever responses the Islamic Republic plans for the assassination.

Iraqis have ambivalent feelings toward the United States. They resent the 2003 Bush invasion and the 8.5 years of foreign military occupation. In 2016, polling showed that over 90 per cent of Iraqi young people saw the US as an enemy. On the other hand, many are grateful for US military help in defeating ISIL (ISIS), the hyper-Sunni terrorist organization that massacred Shiites.

Some 5,000 US troops are still in Iraq, engaging in mop-up operations alongside the Iraqi Army against ISIL remnants, who still control entire villages in the Sunni north. They had also been further training the rebuilt Iraqi Army, which had collapsed and run away from ISIL in 2014. Those US troops are now more or less prisoners in the country and have ceased the training operation, as have NATO coalition partners. They say that they are still doing operations against ISIL, but that strikes me as wishful thinking and bravado in the current circumstances. Their colleagues in such operations, mainly Iraqi Shiites, can no longer be trusted not to frag them.

Parliament meets today, Sunday, to take up the question of whether it should legislate the expulsion of US troops from Iraq.