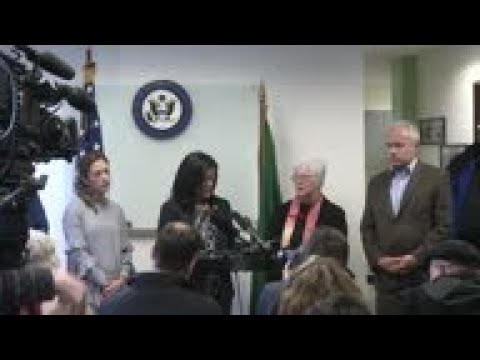 Irvine, Ca. (Special to Informed Comment) – A day under the Trump Administration typically consists of angry tweets, an absurd amount of misinformation, and reckless decisions made by an egotistical maniac. Just three days into the new year we saw exactly that as the Trump Administration launched an attack on Iran, killing the nation’s top military commander, General Qasem Soleimani, by drone strike, and bringing the two nations to the brink of war. Many have been left in confusion, as the reason for the drone strike remains a mystery. Trump claims that Soleimani posed an imminent threat to American lives as he was supposedly coming to Baghdad to launch an immediate attack on the US embassy, and therefore it was America’s duty to act first. As is par for the course in this current administration, however, the president has released no details, and security insiders leaked to the New York Times that this intel was weak and “razor-thin.”

As soon as I heard of the attacks, I immediately feared that innocent Muslims world would be traumatized and persecuted through profiling and discrimination for a crime that we did not commit. This conclusion is based on my own experience as a Muslim American woman.

Trump himself fanned the flames of hatred of innocent Muslims just this week by retweeting a photoshopped image of House majority leader Nancy Pelosi and Senate majority leader Chuck Schumer dressed in Middle Eastern garb. The White House said that he did so to underline the Democratic support for terrorism (!).

As an American who grew up here, it makes me furious that my home country preaches inclusivity and equal rights for all, but rarely delivers. The current crisis has caught in its unthinking net not only us Muslim-Americans in general, but in specific affects the half a million Iranian-Americans, 40% of whom reside in California.

To get a better perspective I asked one Iranian-born colleague about his experience with recent events and his thoughts on the relations between the U.S. and Iran. He told me that the bombing of Iran has left him with very mixed feelings. On one hand he left Iran due to their oppressive government and mistreatment of individuals, but now here in America, not only are they attacking his homeland but there is a steady rise of Islamophobia and hatred.

He told me of a story about a time when he was living in Iran and went to a party with his friends. At some point in the night police came into the house, started beating the guests, and they were eventually thrown in jail with zero explanation. He explained that this was normal police behavior in Iran, and expressed a very negative opinion of the Iranian government because of its inhumane treatment of ordinary citizens.

Therefore, soon after turning 18, he left Iran for America in order to live a better life. However, soon after coming to the United States, he described how he and his sister went for a drive when someone ran up to their car at a stoplight, spit on the window, and yelled vulgar insults about his sister’s hijab or veil. He has reluctantly concluded that we really aren’t entirely welcome anywhere. With with U.S./Iran tensions skyrocketing, and given the openly racist and xenophobic discourse of our current president, our treatment can only get worse.

This was proven correct as just days after the attacks, we are already seeing a rise in profiling along the U.S.-Canadian border. Over the week of January 7th, over 200 Iranian-American families were detained and questioned at length on their political views, family, work history, birthplace, and more. Those detained were reported to have their keys, passports, phones, and other belongings confiscated during the duration of which they were interrogated. Some have reported to be held for 10+ hours.

This unethical and unlawful detainment of American citizens of Iranian extraction led the Council of American-Islamic Relations, or CAIR, a nonprofit civil rights advocacy group for Muslims, to step in and demand justice. CAIR says that they have so far worked with over 60 families in getting them out of the detention centers and back home safe. Many that were interviewed after being released expressed fear for themselves as well as their families. One such detainee, a 24-year-old medical student from Washington, reported that most of those being detained were already American citizens and as he continuously asked why he was being stopped and asked questions that had nothing to do with his travels he was told, “I’m sorry this is just the wrong time for you guys,” by a CBP member.

Claims were made that DHS had told the Americans Custom and Border Patrol to hold and question any person of Iranian decent, inciting the racial profiling. However, in true American fashion, CBP issued a statement on Twitter claiming that they were told no such thing and that the long lines and delays were due to holiday traffic, staffing shortages, and no profiling took place. The tweet was quickly debunked as several pictures as well as lawyers and leaders of non-profit organizations can confirm that almost all detainees were of Iranian descent. The Twitter statement also made sure to tiptoe around the word “detained,” however, lawmakers were quick to point out that just because there were no bars on the windows of the building, those being held in the “waiting rooms,” did in fact have their passports taken away and were therefore unable to go anywhere, hence, unlawfully detained.

The DHS has had quite the history of unlawfully detaining immigrants including Asian-Americans, and more recently, Latinos at Southern border, nor has it been transparent about its actions. Representative Pramila Jayapal of Washington was keen to note that DHS was the same agency that denied family separations were happening, which turned out to be a lie. This continual denial and refusal of accountability for the way America treats its citizens is no new occurrence, but it continues to wreak havoc on countless American lives.

Furthermore, the way America targets and ostracizes (despite official denials) specific groups of people that pose no threat to the nation will help normalize unlawful harassment of Muslim-Americans in Europe and the West more generally. People from the Middle East come to America for a better life for themselves and their families, and don’t deserve to find harassment here. Their home countries, at the same time, often experience instability and terrorism, some of it deriving from American actions such as the 2003 invasion of Iraq. These Middle Eastern lawful immigrants therefore in many cases fear to return to their countries of origin, but face increasing obstacles in Trump’s America. Where should we go?

AP: “Iranian-Americans say they were detained at border”

Aliyya Zahidi is a free-lance journalist from Irvine, Ca. She has a degree from UCLA in Political Science and Government and plans graduate work in International Relations.