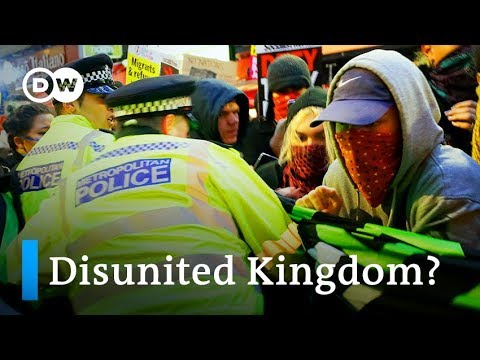 ( British Politics and Policy) – Boris Johnson used his [post-election] victory speech to restate his intention to lead a ‘one nation’ government. But, rather notably, he made no direct reference to either Scotland or Northern Ireland, the two parts of the UK where the ‘one nation’ idea is under most obvious threat. Both present major, difficult dilemmas for his new government, and will provide significant tests for the unionist sentiment which he likes to espouse.

In Scotland, the SNP has now won a clear majority of seats at three consecutive general elections since the independence referendum in 2014. The Conservatives had high hopes that they could retain most of the 13 seats they won in 2017 and stall the SNP’s momentum. But they ended up holding only six, losing badly in constituencies such as East Renfrewshire and Stirling that had particularly strong Remain votes in 2016. This outcome leaves the Scottish and UK governments on a collision course, with the SNP able to claim a strong mandate for seeking a section 30 order for a second referendum, while Johnson has committed to refusing this request while he is Prime Minister.

Tensions on this issue are likely to burgeon quickly in the weeks and months to come. Many supporters of independence consider that the time is right to press this demand, although some in the SNP leadership may be prepared to wait until after the May 2021 Holyrood elections, when they would hope to have secured a mandate that would be even more difficult to deny. If the UK government continues to refuse to engage, the possibility that the Scottish government will test the legality of organising a referendum unilaterally is likely to be discussed more openly. There is a very real danger of drifting towards a major crisis over the issue, which would inevitably invite comparisons to the situation in Spain where the Spanish government has refused to allow a referendum on Catalan independence despite pro-referendum majorities in the Catalan legislature.

Boris Johnson’s government would be advised to consider a wider range of options than just saying ‘No’, loudly and repeatedly, a stance that could well inflame some of those voters not currently enthused by the prospect of another referendum as well as the SNP’s core supporters. Equally, it needs to give serious thought to a broader policy agenda in relation to Scotland, perhaps contemplating a further extension of devolution in areas such as immigration. That could enable the UK government to counter the call for a referendum with an offer that would enable the Scottish Government to pursue its own path in areas where Scottish public opinion is evidently different from that in England.

The UK government also needs to ensure that negotiations start in earnest about the ‘common frameworks’ that will be needed in areas like agriculture and fisheries, once key powers come back from Brussels. It should do all it can to make these negotiations meaningful, and take seriously the perspectives of the devolved governments on these issues. Some progress has already been made on this front, but with the post-Brexit transition period due to last only until December 2020 there is now a need to accelerate this process and involve ministers, not just officials. The long-running review of intergovernmental relations, involving the UK, Scottish, and Welsh governments, and the attempt to set these on a more transparent and systematic footing, is of particular importance and should be seen as a priority by incoming ministers.

North-south dynamics aside, the result in Northern Ireland makes clear the vulnerability of the east-west Union, with unionist representation in the Commons reduced to eight of Northern Ireland’s 18 seats compared to 11 in the last parliament. It should be stressed that both the DUP and Sinn Fèin fell back significantly in terms of vote share, with Alliance and the SDLP the main beneficiaries – so it is an exaggeration to see the results as a vote for Irish unity. Nevertheless, the results will do little to quell the growing discussion in the North about the prospect of unification in the medium-term. Already some voices are insisting that the conditions for a new border poll have been met, and this could well be tested in the courts at some point during the course of the new parliament.

Ireland’s government, and the two newly-elected SDLP MPs, will tread very cautiously in this area. There are many unresolved questions about a border poll and unity itself, and would inevitably be major constitutional and economic implications for the existing Irish state. A good deal of political opinion in the Republic, and among nationalists in the North, favours extensive deliberation and cross-community engagement before any such vote is embarked upon. But there is no doubt that the Scottish referendum demand will reverberate powerfully in some communities in Northern Ireland.

British governmental thinking on this issue is far from being fully formed. But once the Withdrawal Agreement Bill passes through the Commons, there could well be a powerful response from Northern Ireland – where all 11 MPs that take their seats are set to vote against, but seem set to be marginalised now the UK government no longer needs the DUP. To counter this, Johnson’s government will need to develop a multi-stranded strategy which reflects a genuine commitment to engage with opinion from all communities in the North, and to work much more closely with the Irish government, seeking to repair a relationship that has been badly damaged by the political conflicts of the last three years. Committing to working actively to restore the power-sharing arrangements suspended in 2017 (which there are some early positive signs of) is a key, but insufficient, part of the approach that will be required. The new government, and its Prime Minister, may well have to return to the kind of in-person statecraft, and direct engagement, which was so important to the Major and Blair governments’ hard-won achievements in relation to Northern Ireland.

The only alternative to engaging seriously with the constitutional challenges in Scotland and Northern Ireland is to tacitly accept the direction of travel towards the possible break-up of the Union, possibly within the timeframe of Boris Johnson’s premiership which now looks set to continue for many years to come.

Michael Kenny is Professor of Public Policy and Director of the Bennett Institute for Public Policy at the University of Cambridge. He is a co-investigator on the ESRC-funded research project, ‘Between Two Unions: The Constitutional Future of the UK and Ireland after Brexit’, and is a Fellow at the Centre on Constitutional Change.

Jack Sheldon is a Research Assistant and PhD candidate at the University of Cambridge. He works on the ESRC-funded research project, ‘Between Two Unions: The Constitutional Future of the UK and Ireland after Brexit’, and is a Fellow at the Centre on Constitutional Change.

All articles posted on this blog give the views of the author(s), and not the position of LSE British Politics and Policy, nor of the London School of Economics and Political Science. Featured image credit: Pixabay (Public Domain).


This work by British Politics and Policy at LSE is licensed under a Creative Commons Attribution-NonCommercial-NoDerivs 3.0 Unported.

Will Boris Johnson’s calls for unity end in the breakup of the UK? | DW News