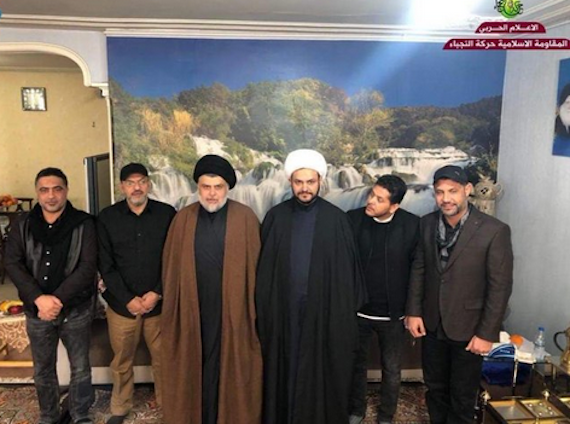 Ann Arbor (Informed Comment) – Iraqi nationalist Shiite clergyman Muqtada al-Sadr said Tuesday that he and the Iraqi Popular Protection Units have planned out a Million-person March to demand that Trump withdraw US troops from Iraq. Sadr leads the Sairun bloc in Parliament, which with 54 seats is the largest party in parliament.

The Trump administration, the US corporate media, and even some Democratic candidates have almost completely ignored the Iraqi parliamentary vote on January 5 obliging the prime minister to take the necessary steps to expel US troops. In last night’s debates, Joe Biden and Amy Klobuchar said that they would keep troops in Iraq, as though it were their decision. Secretary of state Mike Pompeo dismissed the Iraqi parliamentary vote as “advisory.” It was not. It laid an unambiguous obligation on the Iraqi executive. The measure, which was asked for by the prime minister, passed by a firm majority of 170 (165 votes were needed for a majority). It is true that the Sunnis and Kurds boycotted the vote, but Mitch McConnell passes measures every day without any Democrats signing on.

It isn’t actually plausible for the US to remain in the absence of Iraqi government approval, something that al-Sadr intends to demonstrate.

On Monday, Sadr met in the holy city of Qom, Iran, with the leaders of the League of the Righeous (Asa’ib Ahl al-Haq), the Lord of the Martyrs Brigades (Sayyid al-Shuhada Brigades), the Elect (Nujaba’) Movement, and his own Peace Brigades (the successor of the Mahdi Army). These paramilitaries have a joint political wing, Fath, which has 48 seats in parliament and is the second largest political bloc.

These Shiite militias, with the exception of the Peace Brigades, have been backed by Shiite Iran with training and perhaps money and arms. They played an outsized role in defeating ISIL (ISIS or Daesh), the deadly, hyper-Sunni terrorist organization that took over 40% of Iraq in 2014. In early 2018, the Iraqi parliament recognized the Popular Mobilization Forces as an official component of the Iraqi military, making them into a sort of national guard.

Trump assassinated Abu Mahdi al-Muhandis, the deputy commander of the Popular Mobilization Forces and the head of one of them, the Kata’ib Hizbullah, on January 3 with a Hellfire drone at Baghdad Airport, along with several other Iraqi Shiites and Gen. Qasem Soleimani, the commander of the special operations Qods Brigade of the Iranian Revolutionary Guards Corps.

I suspect that the group met in Qom because the Soleimani strike showed that the Unites States could hit out at will on Iraqi soil, where it has 5,200 troops and an extensive air presence, plus good signals intelligence and most important of all, substantial numbers of Iraqi assets or agents whom it has covertly recruited and bought. It was likely such Iraqi informants who facilitated the assassination of Soleimani. While a drone could in theory have hit Qom, that would be a major international incident that might risk war and would bring the condemnation of US allies.

After Trump rubbed out al-Muhandis, the Shiite militia leaders in Iraq have almost certainly gone into hiding for ordinary purposes inside Iraq. Some are based in the Iraqi holy city of Najaf, which has an extensive network of underground tunnels and hiding places that Muqtada al-Sadr deployed against US Marines in 2004.

In a Tweet on Tuesday, Sadr said that “Raiding [US] forces are violating the air, land and sovereignty of Iraq.”

He called for an Iraqi revolution “of neither East nor West,” aiding which would bring good and blessings to Iraq. This is a paraphrase of the Qur’an and the phrase “neither East nor West” was used in the 1979 Islamic Revolution in Iran. At that time it implied that Iran was a third force, neither in the Soviet nor US camp. Ironically, I suspect that Muqtada was using it to say that Iraq would be dominated militarily neither by Iran nor the United States.

He called for the “Army of God” (the Shiite militias) and the “Army of the Nation” (Iraqi nationalists, including the youth who have been protesting corruption and foreign influence, and possibly also including Sunnis) to mass for a peaceful, united nation-wide rally to condemn the US presence in Iraq and its violations. He said he was sure that since “your Iraq” and “your religious leadership” are calling to Iraqis, they will refuse to put their heads down before the Americans or indeed before anyone but God.

After the million-person march, he said, Iraqis had further means — popular, political and parliamentary — to preserve the dignity and sovereignty of the country and the people.

It is very interesting, and crucial, that Sadr called for peaceful mass demonstrations, and for the deployment of political and parliamentary tools, to expel the United States. He not once referred to any use of violence.

In contrast, the Kata’ib Hizbullah has threatened to attack US troops if the Iraqi government does not get them out of the country, though it has given the government a period of time to work on it.

Nevertheless, the organization sent out a Tweet supporting al-Sadr’s demonstrations, and said that it hoped that the Sunni tribes of al-Anbar and Mosul would join their Shiite cousins in the Middle Euphrates and the south of the country in demanding an end to the US “Occupation” of Iraq.

Iraqi Sunnis are opposed to the US leaving, because they fear it might enable ISIL to return, and because they want the US to counterbalance strong Iranian influence in Baghdad. The Shiite militia leaders are hoping to change their minds with an argument that Trump violated the sovereignty of Iraq as a nation.

Hadi al-Amiri, the head of the Fath political coalition that groups supporters of the Shiite militias, seconded al-Sadr’s call for mass rallies against the US presence and to vindicate Iraqi sovereignty both on land and in the air.

The violation of Iraqi airspace by Trump’s Hellfire drone assassination is a big theme of this building protest. Trump did not ask the Iraqi government’s permission or even tell Baghdad about the planned operation. It was not within the scope of the US military operation against ISIL that had been signed off on by the Iraqi government.

The Trump administration clearly does not want to leave, but if Shiite hostility to US troops continues at this level, it might as well. The US forces cannot train Iraqi troops who hate them and might frag them. And they can’t go out fighting ISIL alongside Iraqi troops for the same reason. They have no mission there as I speak, and seem mainly to be involved in hunkering down to defend themselves. That’s not a posture that can continue forever. And there is a danger that if Trump continues with this stubbornness, at some point the Shiite militias will attack the US personnel. Trump will blame Iran, and we’ll be on the cusp of war again.