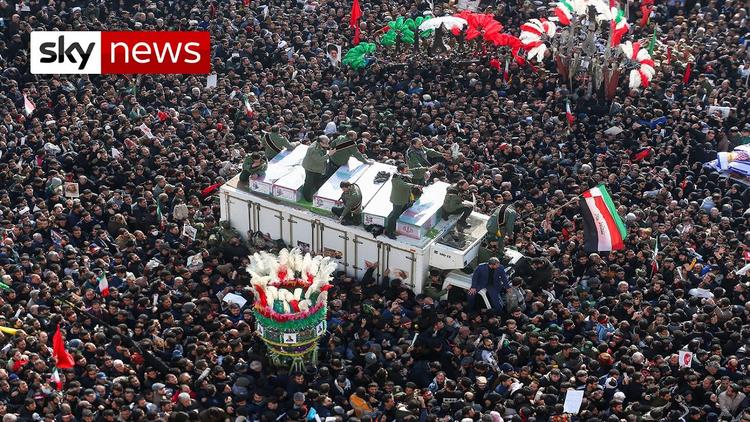 Ann Arbor (Informed Comment) – On Monday, Iran witnessed the largest crowd actions in its history, as millions came out into the streets of cities large and small in a combination of mourning and protest on behalf of assassinated military commander Gen. Qasem Soleimani.

The right wing political forces in the United States are trying to pull the wool over Americans’ eyes. Secretary of State Mike Pompeo, who has been termed a “clown” by his Iranian counterpart, maintained that we should disregard the massive crowds mourning Soleimani because authoritarian regimes have ways of getting people out into the streets by coercion. That is either a deliberate falsehood or mere wishful thinking on his part. You can’t coerce millions of people into the streets. Right wing anti-regime Iranian-Americans played a similar role, insisting that the regime is hated inside Iran and that Soleimani was, as well.

This line of argument, that we should ignore the evidence of our eyes in favor of what Pompeo tells us, recalls the George Orwell line from 1984, “The party told you to reject the evidence of your eyes and ears. It was their final, most essential command.”

These sorts of assertions are propaganda since they paint a black and white picture. In opinion polling, less than half of Iranians have a favorable view of President Hassan Rouhani, and there has been substantial discontent in Iran’s streets over a hike in gasoline prices. But 82 percent of Iranians held a positive view of Soleimani, whom the public saw as a bulwark against the hyper-Sunni ISIL (ISIS) terrorist group. Likewise, 80 percent view the Iranian Revolutionary Guards Corps favorably and believe its activities in Iraq, Syria and elsewhere in the Middle East have made Iran safer. The polling was done recently, by the University of Maryland Center for International and Security Studies in its School of Public Health jointly with Iran Poll.

The ceremonies began on Sunday evening in Ahvaz, when Soleimani’s remains and those of slain Iraqi commander Abu Mahdi al-Muhandis were flown from Iraq. Ahvaz is a southwestern provincial city and has a substantial Arab-Iranian population. It had been restive in recent months because the US is strangling the Iranian economy, but there was no doubt of Soleimani’s rock star status in the city and its surroundings. The mourning procession for Soleimani in Ahvaz went on for miles.

Then the remains were taken to Mashhad. The Shiite political forces that coordinated the long-drawn-out funeral connected the late “general of hearts,” as his fans called him, to the Twelve Imams or vicars of the Prophet Muhammad according to Shiite belief. Thus, the bodies had made the circuit in Iraq of Kazimayn (the seventh and ninth Imams), Karbala (the third Imam, the Prophet’s grandson Husain), and Najaf (the first Imam, Ali– the cousin and son-in-law of the Prophet). Both Ali and Husain were martyred, and Ali was assassinated. The religious establishment of Shiite Islam focuses on mourning these martyrs from the family of the Prophet. The first ten days of the Muslim year, which begins with the month of Muharram, are given over by Shiites to this ritual mourning for the holy martyrs. There are other mourning sessions through the year, on the death dates of those Imams considered to have been killed by their enemies. There are standing neighborhood organizations devoted to arranging these mourning sessions and processions, which have been mobilized for the purposes of commemorating Soleimani.

Mashhad is a major city of the Iranian northeast, with a population of 3 million. (Iran’s population is 81 million.) It is thus about as populous as Chicago inside city limits. The city is the site of a major shrine, to Imam Reza (‘Ali Rida in Arabic), the 8th Imam. He was, aside from Ali, the Imam who came closest to enjoying political as well as spiritual power. It is alleged that the Abbasid caliph Al-Ma’mun (r. 813-833 AD) appointed Imam Reza his heir apparent, but that the latter died before he could accede to power. Perhaps the hundreds of thousands of faithful thought of Soleimani as a spiritual figure who also wielded military and political power. People streamed into Mashhad from surrounding towns and villages.

On Monday morning, the slain figures’ bodies were brought to Tehran, the capital, for a major funeral ceremony at Tehran University. The Iranian press reported that millions came out in the streets in Tehran alone, and there certainly were at least a million.

Tehran is roughly the size of New York, at 8.6 million. And it is at the center of a densely populated part of Iran, so that people came in from elsewhere. A million, looking at the satellite photos, seems entirely plausible.

Clerical leader Ali Khamenei gave an emotional eulogy in which he broke down and wept.

On Tuesday morning Iran time, Soleimani’s remains came home to his birthplace, the southeast city of Kerman. Thus ended the three-day mourning period for a national hero, who, however, was also associated by the organizers with the key sites of Shiite spirituality.

The themes of martyrdom and redemption were appealed to in these ceremonies, participated in by the biggest crowds in Iranian history.

Those figures in the Pentagon and the Trump administration who thought that murdering Soleimani would bring Iran’s government to its knees badly miscalculated. They do not understand religion or martyrdom themselves, and so cannot understand Shiite revivalism. While large numbers of Iranians have discontents with the regime, they have for the moment put those aside in favor of a stunning show of unity in the face of of a lawless and overbearing Trump administration.