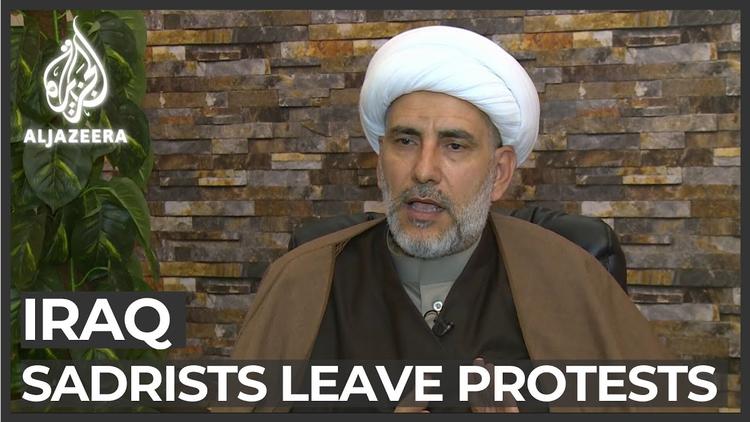 Ann Arbor (Informed Comment) – The Iraqi armed forces tried to pull an al-Sisi on Saturday, making a concerted attempt to clear out camping protesters in Baghdad, Basra, and other cities, and leaving some protesters dead or wounded.

In Baghdad, the security forces attempted to clear Gilani Square and the Sinak Bridge, setting fire to tents. In both cases, however, the police failed, as protesters put out the call for reinforcements on social media and thousands of youth rushed to re-occupy these spaces.

The security forces did clear Mohammed al-Qasim highway, Tayaran Square, al-Nidhal Street, Cordoba Square, and Ahrar Bridge, and said they were cleaning them up in preparation for resumption of vehicular traffic.

In Nasiriya in the south, two protesters were reported killed. Police also used tear gas in an attempt to clear streets and squares, and set fire to protesters’ tents in Basra. In Diwaniya, locals closed the highway that runs through the province to all but food trucks for a seventh day in a row, according to AzZaman (The Times of Baghdad). Sadrists took down three out of over 100 tents from downtown Diwaniya after cleric Muqtada al-Sadr withdrew his active support for the anti-corruption protests.

The move seems to have come as the government became concerned about its survival after Trump bombed Baghdad International Airport on January 3, killing Iraqi military commander Abu Mahdi al-Muhandis and his Iranian colleague Gen. Qasem Soleimani.

On Jan. 5, the Shiite parties across the board voted in parliament to demand that the prime minister take steps to expel US troops.

Trump has said he would refuse to yank American troops from Iraq even if the government asked him to do so, and this stance has been echoed by secretary of defense Mark Esper and secretary of state Mike Pompeo.

The caretaker prime minister, Adil Abdulmahdi, had resigned last fall under pressure from the youth street protests and in response to widespread condemnation of him when over 500 demonstrators were killed by security forces.

The Shiite political elite has closed ranks after the Trump attack, and appears now to be determined to clear out the protesters. There is even a possibility that Abdulmahdi will rescind his resignation. This stiffening of the backbone of the government and new willingness to take brutal and desperate measures against the protest movement certainly has resulted from Trump’s act of aggression, which raised questions for the cabinet and the majority in parliament of whether the Americans were plotting a coup.

On Friday, Shiite cleric and politician Muqtada al-Sadr led tens of thousands of Iraqis in street protests against the US military presence, at Jadriya Square.

Youth protesters at Tahrir Square interpreted this massive rally as a form of support for the government and the Shiite militias that have become part of it. They accused Sadr of selling them out. This, even though these youth also want both US and Iranian forces out of Iraq.

In response, the offended Sadr said he was withdrawing his support from the anti-government protests, whose demand for anti-corruption measures he had earlier endorsed. Aljazeera quoted him as saying, “From now on I will not interfere in these [anti-government] protesters’ affairs neither in a negative nor positive way.”

He does not appear, contrary to some reports, actually to have ordered his followers out of Tahrir Square, and many young Sadrists continued to rally with their colleagues. Others, however, packed up their tents and left.

One narrative in Baghdad is that the departure of the Sadrists left the youth protesters open to being fired on by security forces, since their earlier restraint had derived from a fear of offending the powerful Sadr, whose Sairun party is the largest in parliament.

Egypt’s Field Marshall/ President Abdelfattah al-Sisi violently cleared out protesters from Rabia al-Adawiya Square in Cairo in August of 2013, leaving hundreds dead. This after he rode waves of youth protests to power, making a military putsch in late June of that year. Public protests are now illegal in Egypt and some of the leaders of the 2011 rallies, whom al-Sisi had praised, are in jail or long-term house arrest.