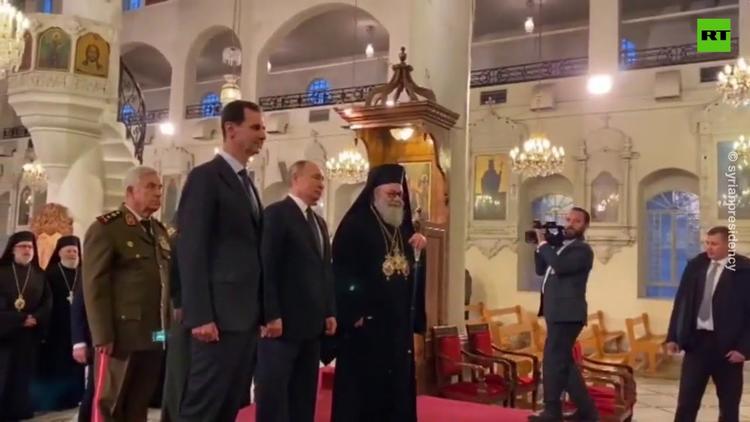 (Middle East Monitor) – Russian President Putin made a surprise visit to Damascus [on January 7], during which he met Bashar Al-Assad, not at the Rawda Palace or the People’s Palace, where the latter customarily receives his guests, but rather at the headquarters of the Russian forces in Damascus. This is not the first time that Russian President Putin has insulted his Syrian counterpart. There was a famous incident at the Khmeimim Air Base, the video of which was widely circulated on social media platforms when the Russian President Putin’s soldiers stopped Bashar al-Assad from following Putin onto the stage to make an announcement. This was a source of great ridicule.

I believe that President Putin does this not only with the intention of mockery or disrespect but also, in part, to send a key message to Assad that Russian is the eminence grise of political decision making in Syria. Therefore, Putin has never publically defended Bashar Al-Assad, as he knows that his political actions cannot be defended. He always focuses on the Western exploitation of the Syrian issue.

While the Syrian regime presents Assad as the president for life, Russian policy focuses more on Assad’s restoration for a transitional period. During this time, Russia could extract benefits post-war, not from poor and weak Syria, but the European Union, and if possible, from the United States.

Perhaps Putin realised the weakness of international interest today in Syria and the indifference and disregard with which the international community deals today with the Syrian bloodshed in Idlib and other cities in the north of Syria. This is because there is no strategic purpose for what is happening there. If the matter is arranged with Turkey, which is still opposed to a significant military operation In Idlib, hundreds, even thousands, can be killed there, in exchange for Idlib being restored to impose Assad’s sovereignty over it. The United States has no firm stance against the operation, and as usual, the European Union is busy with never-ending internal issues, and Brexit.

They also do not have a unified foreign policy they can impose, let alone implement in Syria, neither now nor in the future. This has frustrated Putin, who expected to be rewarded for his actions in Syria. It then defeated Erdogan, who assumed the world would reward him for his decision to build a safe zone in Syria to return the refugees. Putin has discovered that Assad does not value Syrian independence as much as he is concerned with being named president of all of Syria, no matter the price. The price of this is the blood of hundreds of thousands of Syrians and the destruction of their cities and villages. There is no future for rebuilding Syria after all of this destruction, especially in light of the international community’s disregard for what is happening in Syria.

In his report to the Security Council, the new UN special envoy expressed his pessimism about the efforts to amend the constitution in Syria, which completely contradicts his optimistic statements last month. Special Envoy Geir Pedersen told the Security Council in a video conversation, “I see no reason to convene another session of the small body.” He also expressed “great frustration” over lack of progress, adding, “The constitutional committee is and will remain fragile.” Pedersen did not reinvent the wheel. We all know that the fate of the constitutional committee will also end, as Al-Assad’s regime did not show any desire for negotiations when it was in a much more difficult position in 2014 and 2015, so how will it make concessions today when it is high on victory.

So the question remains, since the first Russian veto that Putin used in the Security Council to protect Bashar al-Assad’s regime in August 2011: What does Putin want from Syria? Walking in the streets of Damascus, he answered that he was proud of restoring safety to its streets. Still, he did not answer whether this safety was concealing poverty, hunger, displacement, and expulsion. None of this matters to Putin, as he is only concerned with the image and as long as his picture is being raised in Damascus, there is no value for anyone who raises it or glorifies it.