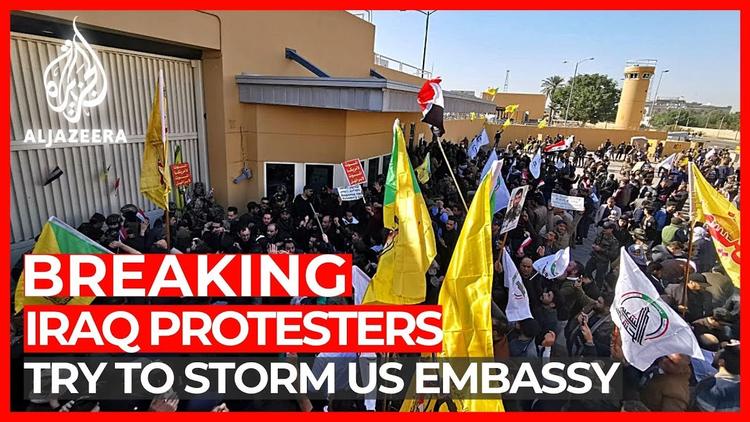 Ann Arbor (Informed Comment) – There was nothing more predictable than that the US Embassy should come under attack after the US Air Force bombed five bases of the Iraqi Shiite militia, Kata’ib Hizbullah (Party of God Brigade).

Hundreds of supporters of the militia demonstrated in front of the embassy Tuesday, in the wake of funerals for some of the 45 militiamen killed by the US in strikes on Sunday.

Then some of them got through the Green Zone blast walls and reached the embassy, setting fire to a guard kiosk, reaching the anteroom where guards typically frisked visitors. Iraqi troops detailed to the embassy appear to have initially vanished. US embassy guards fired in the air and deployed tear gas. It does not appear that the militiamen were very determined to get inside the embassy, since it seems to me they could have if they had tried very hard.

Political leaders of the Fath coalition to which Kata’ib Hizbullah belongs called Tuesday for the US ambassador to be expelled and for the US troop presence Iraq. On Arabic satellite t.v. today, I saw a parade of hard line Shiite leaders accuse the embassy of being a nest of spies and a command headquarter for the infliction of harm on Iraqis by the United States. This is the discourse of the MEK (Mojahedin-e Khalq) and other organizations in 1979 who invaded the US embassy in Tehran and took the staff hostages for 444 days.

Ironically, Rudy Giuliani and John Bolton later on appear to have more or less joined the MEK, taking tens of thousands of dollars in speaking fees for each appearance at its conclaves, forgiving it for the hostage taking of US diplomats and for allying with Saddam Hussein and engaging in terrorism because it opposes the current regime in Tehran.

Here’s another irony: There doesn’t appear to have been any enhanced security for the US Embassy in Baghdad in the wake of the Trump administration bombing of the equivalent of the Iraqi National Guard. I mean, what exactly was Secretary of State Mike Pompeo thinking? That the US can act with absolute impunity several thousand miles away? The US actually controlled Iraq for 8 and a half years in the first decade of this century, and thousands of US troops were killed nevertheless.

In fact, Pompeo and the Trump administration have drastically slashed funding for embassy security, according to The Hill, and in 2018,

“Rep. Gregory Meeks (D-N.Y.) confronted Pompeo during the hearing about the decrease in spending on diplomatic security under the Trump administration.

“Under the Obama Administration, over $3 billion went to diplomatic security, but once President Trump came in, I see it went to down $2.1 billion … and down to $1.6 billion,” Meeks stated.

“So where is the concern now about diplomatic security?” he asked Pompeo.”

I have said repeatedly that the 5,000 or so US troops in Iraq are not so much troops as hostages if all of Iraq abruptly turned on them. And nothing is better calculated to make them the target of popular anger than to have them attack Iraqi militias. The Trump administration maintains that Kata’ib Hizbullah is responsible for mortar strikes on bases where US troops are present, and is responsible for the killing of a US contractor. Trump and his officials see Kata’ib Hizbullah as a mere cat’s paw of Iran.

An Iranian spokesman made fun of Trump, saying it was rich for the US to blame Iran for an Iraqi reaction to being attacked by the US.

In any case, it seems to me that Iran and its allies have won the symbolic victories inside Iraq, since to most Iraqis it looks like the US attacked national guardsmen trying to repress the remnants of the ISIL (ISIS) terrorist organization.

Ironically, Secretary of State Mike Pompeo catapulted himself into his current office in part by vocally participating in dozens of House hearings on the 2011 militant attack on the US consulate in Libya’s Benghazi.

“He was martinet-in-chief of the Republican House’s conspiracy in 2014-2016 to smear Hillary Clinton over the death of J. Christopher Stevens, the US ambassador to Libya, in the 2012 attack by Muslim radicals on the makeshift US consulate in Benghazi.

Then his big attack on Clinton consisted of a demand to know why she had not summarily fired any State Department personnel.”

So how’s it feel to be secretary of state when a US embassy is attacked, Mike? Don’t you think it is your fault now, as you maintained it was Hillary Clinton’s fault in 2011?