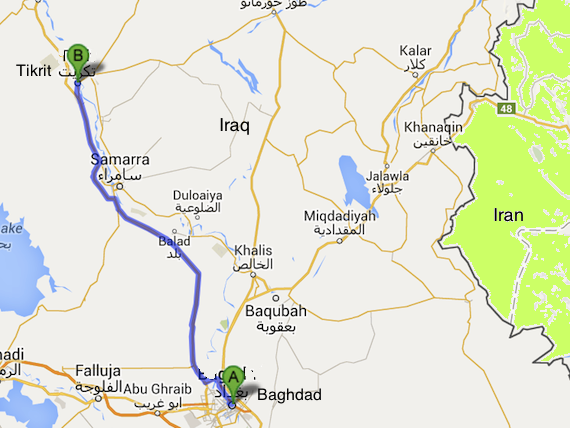 Ann Arbor (Informed Comment) – Since the US political establishment and press has been demonizing Gen. Qasem Soleimani since he was rubbed out by Trump, it is perhaps worth complicating the story– especially now that Trump is accusing him of having targeted not one but four US embassies. Trump is a notorious and compulsive liar, and there is no reason to think that charge is true. The prime minister of Iraq says he invited Soleimani to Baghdad for peace negotiations with Saudi Arabia and then Trump just suddenly blew his guest away. Soleimani came openly on a commercial flight and went through passport control with his diplomatic passport. His arrival in Baghdad was not part of a covert operation to hit Americans. Nor did Soleimani, as Wolf Blitzer breathlessly reported on CNN kill “millions” (when? where?).

Nor was he a terrorist; terrorists are non-state actors. He was a general in the Iranian military. Soleimani fought in the Iran-Iraq War of 1980-88, which was a defensive war on Iran’s part, since Iraq aggressively invaded under Saddam Hussein. The United States supported Saddam to the hilt in his aggression. So you’d have to say that in the 1980s Soleimani was doing something heroic, whereas the Reagan administration was doing something shameful. Reagan even ran interference for Saddam at the UN when Iran brought a complaint about the Iraqi use of chemical weapons.

In the 1980s and 1990s, Soleimani trained the Badr Corps, the Iraqi paramilitary of the Supreme Council for Islamic Revolution in Iraq (SCIRI), which is now the Islamic Supreme Council of Iraq.

When George W. Bush invaded Iraq in 2003, his viceroy, Paul Bremer, appointed a Transitional Governing Council made up of Iraqis who were glad that the US had overthrown Saddam Hussein. Bremer appointed to the council, who served as his cabinet of a sort, a representative of Muhammad Baqir al-Hakim. Al-Hakim led SCIRI, of which Badr was the military arm. Bush and Bremer were indirectly hand in glove with Soleimani’s main proxy in Iraq. When al-Hakim was killed by a bombing on Aug. 29, 2003, Bremer his brother Abdul Aziz al-Hakim, who had served as a governing council member became the head of SCIRI. Abdul Aziz had been the head of the Badr Corps, and was reporting back to Soleimani. Bush and Soleimani were hand in glove in Iraq. [This para. revised to reflect that it was not Muhammad Baqir al-Hakim personally who served on the governing council, though SCIRI was given the seat.]

In Syria, Soleimani fought ISIL and al-Qaeda linked groups, making him a de facto ally of the US, though his hard line pro-Shiite policies also did alienate Sunni Syrians. But many Syrian opposition groups had hooked up with al-Qaeda or ISIL well before 2015, when Soleimani began intervening directly in Syria at the request of the government of Bashar al-Assad. Sunni Syrians don’t forgive him for his role in the taking of, say, East Aleppo. But it is also true that his forces helped defeat groups that praised al-Qaeda leader Ayman al-Zawahiri and even took orders from him.

Then there was Soleimani’s key role in helping defeat ISIL in Iraq, where, again, he was a de facto and even tactical US ally (see below).

Soleimani was a complicated man, a man of the religious far right, an authoritarian. Although I think it is nonsense to speak of him committing terrorism, he did commit war crimes. I am not sure he is responsible for nearly as many deaths as George W. Bush, though. In this essay I’m not defending Soleimani, I’m only trying to complicate the glib story being pushed at us by the Trump administration, which can’t speak two sentences without telling four lies. The best antidote to black and white authoritarian views of the world is an attention to irony and ambiguity.

Remember that in 2014 ISIL (or ISIS, i.e. Daesh) took 40% of Iraq and the Iraqi army trained by the US collapsed and ran away. Without the Shiite militias that Soleimani organized, Iraq would have been supine.

So here’s what I wrote about the beginning of the Tikrit campaign against ISIL in March, 2015:

“The Iraqi military and allied Shiite militias are mounting a campaign to take the largely Sunni town of Tikrit (original pop. 300,000), which is alleged to have been planned and is being directed by the Jerusalem (Quds) Brigade, the foreign special ops arm of the Iranian Revolutionary Guards Corps (IRGC). Quds Brigade commander Qasim Soleimani has been photographed on site.

Prime Minister Haydar al-Abadi appears to have ordered this campaign despite the fears of the US that the Iraqi army was not ready for it and that insufficient effort had been expended to raise Sunni tribal levies. As it is, perhaps two thirds of the attacking forces are Shiite militiamen trained and equipped by Iran. The US did not initially give it it close air support, allegedly as part of a deal Washington made with PM al-Abadi that Iran could take part in the Tikrit campaign but the US as a result would not. The US does not want Iran involved in the coming Mosul campaign because the largely Sunni city of some one million would not accept Iranian special forces.

Tikrit is from all accounts a ghost town. Much of its population fled last summer when Daesh took it over. In the past week, another 30,000— ten percent of its prewar population— has fled. Sunni townspeople hitting the road have torn up sheets to wave as white flags of surrender if they encounter Shiite militiamen, of whom they are terrified, saying that the militiamen are often seeking revenge. Iraqi government sources say that this fear is overblown, and that 4000 Sunni fighters have joined in against Daesh.

The Iranian press in Arabic, al-`Alam, reports that the Iraqi Army and Shiite militias had surrounded Tikrit and cut off resupply routes for Daesh. [The Iraqi press contradicts this allegation, saying that the Daesh position in Tikrit is receiving reinforcements from the north.] They also chased Daesh (ISIS or ISIL) from villages southeast of Tikrit and were now at the threshold of al-Dur district. It claimed that the Baghdad forces had inflicted a terrible toll on the Daesh fighters, and had managed to defuse two truck bombs in the district. The Iraqi army has, it says, liberated a housing complex in al-Dur, killing dozens of Daesh fighters. There were 33 casualties among the Shiite militias and the Iraqi army.”

“US fighter jets have, at the request of the Iraqi government of Haydar al-Abadi, begun bombing Daesh (ISIS, ISIL) positions in Tikrit, according to al-Hayat (Life).

Initially, the US sat out the Tikrit campaign north of the capital of Baghdad because it was a largely Iran-directed operation. Only 3,000 of the troops were regular Iraqi army. Some 30,000 members of the Shiite militias in Iraq joined in– they are better fighters with more esprit de corps than the Iraqi army. Some of them, like the Badr Corps of the Islamic Supreme Council of Iraq, have strong ties to Iran. The special ops unit of the Iranian Revolutionary Guards Corps, the Jerusalem Brigade, provided tactical and strategic advice, commanded by Qasem Solaimani.

The campaign deployed tanks and artillery against Daesh in Tikrit, but those aren’t all that useful in counter-insurgency, because they cannot do precise targeting and fighting is in back alleys and booby-trapped buildings where infantry and militiamen are vulnerable.

The campaign stalled out. The Shiite militias didn’t want the US coming in, but have been overruled by al-Abadi. US aircraft can precisely target Daesh units and pave the way for an Iraqi advance against the minions of the notorious beheader “Abu Bakr al-Baghdadi” (the nom de guerre of Ibrahim al-Samarrai, who is apparently wounded and holed up in Syria).

US air intervention on behalf of the Jerusalem Brigades of the IRGC is ironic in the extreme, since the two have been at daggers drawn for decades. Likewise, militias like Muqtada al-Sadr’s “Peace Brigades” (formerly Mahdi Army) and League of the Righteous (Asa’ib Ahl al-Haqq) targeted US troops during Washington’s occupation of Iraq. But the fight against the so-called “Islamic State group” or Daesh has made for very strange bedfellows. Another irony is that apparently the US doesn’t mind essentially tactically allying with Iran this way– the reluctance came from the Shiite militias.

Not only US planes but also those of Jordan and some Gulf Cooperation Council countries (Saudi Arabia? the UAE? Qatar?) will join the bombing of Daesh at Tikrit, since these are also afraid of radical, populist political Islam. But why would they agree to be on the same side as Iran? Actually, this air action is an announcement that Iraq needs the US and the GCC, i.e. it is a political defeat for Iranian unilateralism. The US and Saudi Arabia are pleased with their new moxie in Baghdad.”

I finished up the story at The Nation :

“Finally, Daesh was defeated by early April in Tikrit north of Baghdad, a major Sunni city of some 300,000 that was the birthplace of Saddam Hussein and many other high Baath officials who bestrode Iraq in the 1980s and 1990s. The initial Tikrit campaign was planned out by Iran and was a land action that ran into trouble because of Daesh booby-traps and medium weaponry such as artillery and armored vehicles. The vast majority of the fighters were militiamen, supported by only one Iraqi military brigade and by a thousand Sunni tribesmen. The campaign stalled out because Washington, miffed at being sidelined by an Iranian-planned battle, at first declined to send aerial support. In the end, faced with the prospect of a Daesh victory, president Obama ordered bombing raids in aid of the attack on Tikrit, which turned the tide.”

Lest the Trumpies imply that only Obama de facto allied with Soleimani and his Iraqi Shiite militias, it should be pointed out that they played an important role in the defeat of ISIL at Mosul during Trump’s presidency. Although they did not fight their way into the city, they fanned out to the west and north to prevent ISIL terrorists from escaping to Raqqa in Syria. That was why Kata’ib Hizbullah had a base at Qa’im, a checkpoint between Iraq and Syria, where they were preventing ISIL agents from going back and forth. Trump kicked off the current crisis by bombing his allies at Qa’im, killing some 26 militiamen. And then he droned his sometime ally Soleimani to death at Baghdad airport as Soleimani was about to begin covert peace talks with Saudi Arabia.

CNBC International: “Iran’s Soleimani is seen by many as ‘the man who kept ISIS’ out of the country”