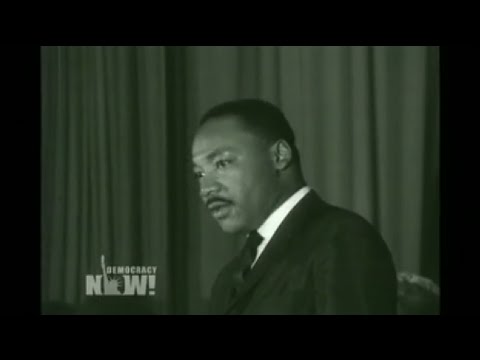 Ann Arbor (Informed Comment) – The Rev. Martin Luther King, Jr., whose activism we honor today, took stands far beyond Selma and Montgomery, and called on other capitals than Washington, D.C., to ensure a dignified life for human beings. Dr. King was an early and vigorous opponent of the white South African Apartheid (segregationist) government.

He wrote former ambassador Chester Bowles in 1957 on behalf of a rally in New York on Human Rights Day, Dec. 10, organized by the National Committee of the American Committee on Africa, where Eleanor Roosevelt was to speak. He said,

“We have watched with great concern the relentless pursuit of official racism (apartheid) by the South African Government. It has defied the most elemental considerations of human decency in its treatment of African and Asian citizens, loosely called non-whites. Our concern has turned to horror as we have learned of the brutal treatment of these non-white South Africans and the extension of totalitarian control into almost every area of human life. What has been almost as shocking is the callous disregard of this tragedy by the free peoples of the world.”

King was throughout his life a warm supporter of security for Israel. Only late in his life, in 1967, did he cancel a trip to Israel over its preemptive Six Day War against Egypt and Tel Aviv’s unilateral occupation of Jerusalem, of which, reading between the lines, he disapproved.

An FBI wiretap of a conference call between Dr.King and Andrew Young and others in July of 1967 recorded Dr. King’s reasons for declining, in the end, the invitation of the Israeli prime minister’s office:

“I’d run into the situation where I’m damned if I say this and I’m damned if I say that no matter what I’d say, and I’ve already faced enough criticism including pro-Arab. I just think that if I go, the Arab world, and of course Africa and Asia for that matter, would interpret this as endorsing everything that Israel has done, and I do have questions of doubt… Most of it [the pilgrimage] would be Jerusalem and they [the Israelis] have annexed Jerusalem, and any way you say it they don’t plan to give it up… I frankly have to admit that my instincts – and when I follow my instincts so to speak I’m usually right – I just think that this would be a great mistake. I don’t think I could come out unscathed”

A careful reading of this text shows that Dr. King was not just concerned about criticism from “pro-Arab” African-American leaders of a Black Nationalist bent, or from African and Arab governments. He took plenty of criticism throughout his life. What he was afraid of was looking like he intended to endorse something he did not. “I do have questions of doubt,” he said, about Israel’s war.

Dr. King was an anti-war pacifist who had begun speaking out against the American war against Vietnam. He did not approve of wars of choice. Moreover, it was clear to him that the Israelis, having conquered East Jerusalem from Jordan and the Palestinians by force of arms, would never relinquish it. He seems to have felt a foreboding that Israel had just become a colonial occupier of the sort he had spent his life condemning.

Dr. King did not want to look as though, by going to Israel in the summer of 1967, he was signalling approval of what Tel Aviv had done.

(Israeli propaganda is so effective that it has convinced a lot of people that 1967 was a war of defense. It was not. It was a preemptive war of choice. Israel fired the first shot, and Egyptian leaders have admitted that despite Abdel Nasser’s big talk, Egypt was then bogged down in the Yemen Civil War and was in no position to launch a war against Israel in June of 1967. Moreover, Egypt’s superpower patron, the Soviet Union, told Cairo that if the Egyptian army fired the first shot, it was on its own and the Soviets would not offer any help. As for Gaza and the West Bank, the Palestinians there were civilians and did not play a role in the war, which was Israel’s war on Egypt, Jordan and Syria, and there was no defensive justification at all for occupying the Palestinians.)

There is a further consideration. Jerusalem is a Christian holy city, and Dr. King was a Christian clergyman thinking of taking a Christian group of pilgrims there. The UN General Assembly partition plan for British Mandate Palestine of fall, 1947, never had the force of law, since only the UN Security Council could so have endowed it, and they declined to do it. But even it avoided awarding Jerusalem to Israel. There is no warrant in international law for Israel to annex all of Jerusalem, and Dr. King was keenly aware of it.

We thus see there at the end of his life the beginning of a change in Dr. King’s thinking about Israel. Earlier, like many on the Left, he had seen Israel as a postcolonial state that freed itself from British colonialism, just as had Ghana and Kenya. Before 1967, most Palestinians were under caretaker rule, Egypt in Gaza and Jordan in the West Bank. Israel itself was 20% Palestinian, but it was largely Jewish and many Israelis were from the families of Holocaust survivors. Israeli governments were socialist. Even an anti-colonial, Communist man of the left such as Jean-Paul Sartre was pro-Israel under those circumstances. The international Left, moreover, coded the Arab leaders as feudal or as fascist (in the case of Abdel Nasser, who persecuted Egyptian Communists).

The big difference between Sartre and Dr. King is that Sartre wholeheartedly supported Israel in 1967, but Dr. King could not. He had “questions of doubt.”

Those who have argued that Dr. King was pro-Israel are correct. He was also a major champion of American Jews against hateful bigotry and anti-Semitism.

He slammed brutality. He slammed segregation. He slammed totalitarian control. What would he have thought of the Israeli checkpoints Palestinians have to go through to get from one town in Palestine to another (and even sometimes just to get to the hospital)? It deeply resembles the Apartheid pass system for black Africans.

“we are grateful that our state department has protested the mass killings of our south african brothers and we are pleased that the un security council will meet march 29th to consider that outrage.2 we urge that before march 29th our government issue a statement placing the administration firmly on the side of negroes in the southern states in their present struggle for their constitutional rights, since they are subjected to intimidation, threats and violence when they claim these rights.”

Here is what the site South African History says about that massacre:

“Early on the 21st the local PAC [Pan-Africanist Congress] leaders first gathered in a field not far from the Sharpeville police station, when a sizable crowd of people had joined them they proceeded to the police station – chanting freedom songs and calling out the campaign slogans “Izwe lethu” (Our land); “Awaphele amapasti” (Down with passes); “Sobukwe Sikhokhele” (Lead us Sobukwe); “Forward to Independence,Tomorrow the United States of Africa.”…

According to the police, protesters began to stone them and, without any warning, one of the policemen on the top of an armoured car panicked and opened fire. His colleagues followed suit and opened fire. The firing lasted for approximately two minutes, leaving 69 people dead and, according to the official inquest, 180 people seriously wounded. The policemen were apparently jittery after a recent event in Durban where nine policemen were shot. Unlike elsewhere on the East Rand where police used baton when charging at resisters, the police at Sharpeville used live ammunition.”

What would Dr. King have said about the Israeli army on the Gaza border shooting fish in a barrel with live ammunition: or as the UN says, “In 2019, 33 Palestinians were killed by Israeli forces during the GMR protests and 11,523 were injured, bringing the total to 212 fatalities and 36,134 injuries since the demonstrations began” (in spring 2018). The Palestinians in Gaza have shouted slogans similar to those of the PAC at Sharpeville. They have staged weekly the Great March of Return, insisting that the land is their land (70% of Gaza families were ethnically cleansed from what is now Israel by Zionist militias, who then stole their houses and land).

What difference is there between the Sharpville Massacre of 1960 and the Gaza Massacre of 2018 – 2020, except the enormously greater scale of Israeli army brutality? You really think Dr. King would be all right with this?

Dr. King would be emailing President Trump, just as he telegraphed President Eisenhower. How far America has fallen is demonstrated by Eisenhower’s concern over Sharpeville and Trump’s complete insouciance toward Israeli Apartheid toward the Palestinians.