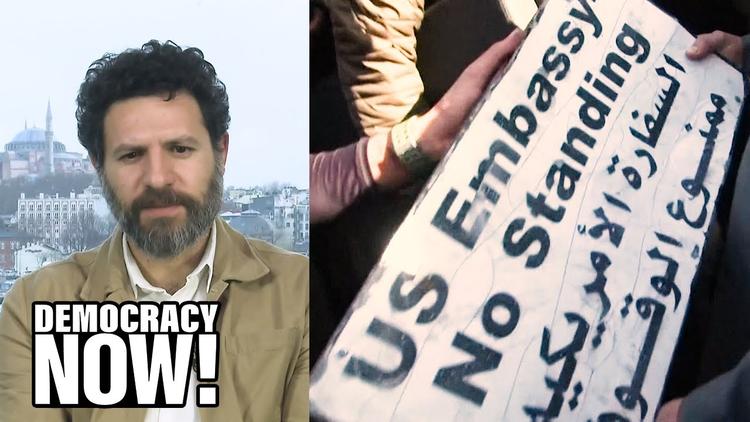 Boston (Special to Informed Comment) – The last day of 2019 saw a huge contrast between scenes of New Year’s joy in Times Square in the United States with interminable conflict and a kind of US global dictatorship at the periphery, in Iraq. There, if the US kills militia members who are part of the Iraqi government’s state-sponsored Popular Mobilization Forces, it is assumed by US government officials and many mainstream journalists that any consequential protest must be orchestrated by Iran. The fact that the stationing of the US military in Iraq since 2003 is unpopular among Iraqis is absent from the media and US government rhetoric. Similarly, when Iraqis protest against their government and Iranian influence, the media seems to conceive of the protesters’ aims ‘naturally’ coincide with US strategic goals for the region.

On Tuesday, US Marines used rubber bullets to thwart protesters from the US Embassy in Baghdad, following the US’s murder of 25 Kata’ib Hezbollah militia members. This is same militia that helped the US and Iraqi Army oust ISIS from Iraq, which arose from Iraqi Ayatollah Ali al-Sistani’s fatwa for the Shia youth to fight ISIS, resulting in the Iraqi government-sanctioned Popular Mobilisation Forces (PMF), of which Kata’ib Hezbollah is a member.

Kata’ib Hezbollah has been blamed for 11 recent attacks on Iraqi bases, the most recent killed an American contractor, which the PMF denies. Because of the various sometimes violent protests against the Iraqi government, ISIS factions still active in Kirkuk (where the recent rocket attack took place) and the various militias prevalent in Iraq, when there is no clear perpetrator, Shia militias are convenient actors to blame. Iraqi Iranian-allied militias have likely been involved in attacking Iraqi bases housing American contractors and troops, but the scale is something that is likely lost in the fog of war and can be used for political ends, to pursue policy goals.

The December 27th rocket attack, while killing an American contractor, did not kill a US soldier. The determination that a the killing of a private security contractor as a national security interest and killing 25 Kata’ib Hezbollah in retaliation speaks to the true US interests in the region and over 800 bases around the world – the death of a contractor indicates that it is not safe for business to be conducted by the military industrial complex in Iraq. Yet one may wonder if the situation was safe, there would be little need for private military companies’ involvement in Iraq and hot spots throughout the world.

Yet Iraq is not so simple. Many Iraqis want less Iranian influence in the country, mostly Sunnis but also large numbers of Shias. Many Shias see Iranian influence as helpful towards stability and key in ridding the country of ISIS. Meanwhile, of late and likely due to a less overt footprint, Iraqis have seemed to tolerate American presence, perhaps realizing after years of popular resistance in the mid-2000s and after the US and Iran rid the country of ISIS, Iraqis decided to bide their time waiting for a US exit.

But when the US attacks a Shia militia, Kata’ib Hezbollah, which is part of the government sponsored PMF, there is pushback. The alleged 11 attacks on Iraqi military bases over the past two months are often cited, but nowhere are detailed and even US officials do not attribute all of them to Kata’ib Hezbollah – because there’s a good chance the sources of these attacks are difficult to determine in the increasing anarchic conditions of Iraq. In short, the attribution of the attacks to Kata’ib Hezbollah and the Dec. 27th rocket attack killing an American contractor could be fabricated to convince the American people that the US should take a more aggressive stance toward Iran.

In this sense, timing could be everything, creating conditions for an October surprise that would likely help an unpopular, impeached president get re-elected with either a full-scale conflict with Iran or a very hot proxy war fought on Iraqi soil, as if Iraqis haven’t suffered enough. In either case, large swathes of undecided voters may have the tendency to defer to the president and commander and chief of the armed forces under such conditions. Never mind that the Trump administration constructed the conditions that led to this hypothetical war by withdrawing from the JCPOA, which Iran had been abiding by and had resulted in a rare détente in US-Iran relations. Never mind that the US unleashed economic warfare of mass sanctions on Iran for simply living up to the treaty’s terms. Iran has used various methods to counter US aggression, whether detaining oil tankers in the Persian Gulf, likely, but not certainly, urging local allies to cause problems for American interests in Iraq and Iran’s shooting down an American drone.

In orchestrating a “maximum pressure” campaign, Trump made a big mistake. When Mike Pompeo demanded what amounted to almost a complete surrender by the Iranians, Trump thought he could get a new treaty with better terms for the US. Instead, Iran acted like a rational sovereign actor and used available tools to push back. As the 2020 election nears, the time may have been deemed right by Trump to capitalize on Iran’s understandable defiance and commence war, either proxy or direct.

Such unhinged behavior of a superpower is only one instance among many that feeds the mountain of why “they hate us,” and, consequently, much of why Times Square on New Years Eve and America, in general, has become intensely securitized over the past few decades: there is blowback for illegal and immoral US foreign policy.

Yet, still, when the news reads of the US Embassy under attack by Iraqi protesters and the president blames Iran, many Americans’ minds will revert back to the US Embassy in Tehran and the 1979 hostage crisis. Unfortunately, it may not be difficult to convince the American public to support military action against Iran. On the other hand, the “end forever war” mantra has come a long way in recent years and may give Trump pause in escalating a very dangerous situation that would inflame the entire region, which had shown signs of simmering.

Democracy Now! “Could a “New Civil War” Erupt in Iraq as U.S. and Iran Fight for Influence in the Country?”

Peter Crowley is an independent writer and scholar with a M.S. in Conflict Resolution, Global Studies from Northeastern University. His writings can be found in Boston Literary Magazine, 34th Parallel Magazine, Counterpunch, Foreign Policy Journal, Work Literary Magazine, Znet, Opiate Magazine, Truthout, Antiwar.com, Peace Review (forthcoming) and several others. His poetry book "Those who hold up the earth" is scheduled for publication by Kelsay Books in the first half of 2020.