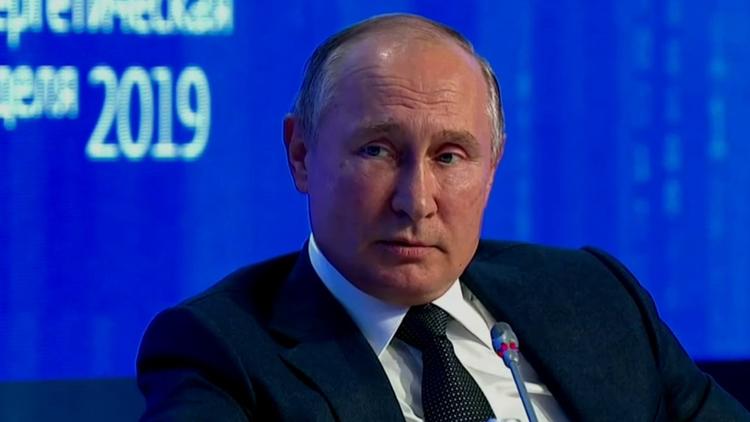 Ann Arbor (Informed Comment) – Russian President Vladimir Putin has been accused by Western intelligence agencies of seeking to interfere in the 2020 US elections in favor of Donald Trump on the right and in favor of Bernie Sanders on the left.

But guess what, Russia doesn’t actually want Bernie to win. At all. Moscow just wants the US to be polarized and fighting internally so as to leave Russia alone to pursue its expansionist projects in places like Ukraine. As I argued yesterday, Russian analysts mistakenly assume that Sanders cannot win against Trump, and so they may think it is safe to support him (since they really want Trump to be reelected).

How do I know that Russia would actually hate, abhor and despise a Sanders presidency? Because Sanders’s Green New Deal would bankrupt Russia.

If the Russians thought Sanders really had a chance, they would shift their support abruptly to a climate denier or at least a “go slow” politician.

After all, Putin even attacked Greta Thunberg as the naive tool of “green energy imperialists” who are, he alleged, plotting to keep people poor. (New wind and solar are actually now cheaper than coal and natural gas).

Not only would Americans driving electric cars cause oil prices to go into free fall, but if they bought lots of electric cars it would cause the price of those cars themselves to fall. Imagine the money that would go into making cheaper batteries with longer range. Cheap electric cars driven by a huge American market would increase EV sales all around the world. It would pull the plug on the oil markets. You could see oil fall from $60 a barrel today to $2 a barrel. Bernie would push to make this happen in 10 short years.

Putin knows the dangers here, and hence tries to deny the climate crisis. Last November at a Moscow investment conference, Putin expressed extreme alarm at European plans to reduce use of natural gas. He said, according to Euractiv, “in my view, disdaining such a clean hydrocarbon as gas is absolutely strange”.

Responding to a European plan to reduce use of all fossil fuels from 2022, Putin said, “When people suggest such ideas, I think that mankind could end up back in caves again.” He added that “the way technology is today, without raw hydrocarbons, without nuclear power, without hydroelectric power, mankind can simply not survive, cannot preserve its civilisation”.

By the end of 2020, all of Scotland’s electricity will come from wind, solar, hydro, and current, that is, from precisely the sources Putin neglected to mention. I’m partly of Scottish descent, and consider the idea that Green Scotland is in any way backward, much less Neolithic, to be fighting words. In fact, it is Russia, with its 20th century fossil fuel economy, that is backward. And it is the fossil fuel-caused climate crisis that is driving people from their homes.

Putin isn’t actually afraid of people becoming cave men. He is afraid of his economy radically shrinking if people get off oil and gas. Petroleum and natural gas comprised 65 percent of Russian exports in 2018, and account for 40 percent of its gross domestic product. Although its Soviet past and its military-industrial complex make Russia a significant global player, it is actually just a petro-state like Saudi Arabia. It is only 11th among world economies, and lies amid South Korea, Spain, Canada and Brazil. Not, in other words, in the same league as the US, China and Japan.

The rise of green energy and electric vehicles has the potential to make Russia plummet on down to a level of GDP below that of Mexico and more like the Netherlands, which only has a tenth of its population. I.e., if you took away the 40 percent of GDP that is oil and natural gas, Russia’s gross domestic product would fall to less than $1 trillion annually.

The US GDP is $21.4 trillion annually. One of the reasons Russia is so nervous about its world standing and is willing to spend enormous sums to be in countries like Syria is that economically it has fallen from being a peer superpower with the United States to having a smaller economy than Canada or Brazil, and is in danger of becoming Holland. (Holland is rich per capita because its GDP is only divided by 17 million people, not Russia’s 144.5 million.

Early in the last decade (and before) Russia was, like Saudi Arabia, a consistent impediment to United Nations climate agreements and efforts. Even after the 2015 Paris Agreement was joined by 197 countries, Russia declined to join.

Putin is a notorious climate change denier. Just last December, he said, according to DW, “nobody knows the origins of global climate change . . . We know that in the history of our Earth there have been periods of warming and cooling and it could depend on processes in the universe.”

It doesn’t sound smarter in Russian than it does in English. We know exactly why the earth is heating, and it is because human beings are burning fossil fuels on a gargantuan scale. While climate has changed in the past, it was because of things like a million years of extraordinary volcanic activity spewing carbon dioxide into the atmosphere. We haven’t had that kind of vulcanism lately. In fact, we only just came out of an ice age 12,000 years ago. And, sun spots have been unusually un-active in the past few decades, which should have led to global cooling. It has not. There is nothing in nature that explains climate scientist Michael Mann’s famous “Hockey Stick” graph of spiraling heating: 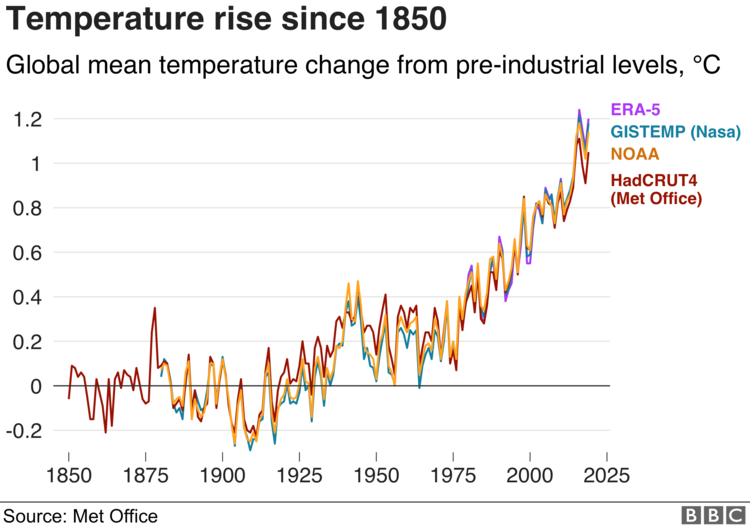 Putin has begun greenwashing, talking a good game about reducing greenhouse emissions. But he plays easily seen-through tricks like taking 1990 as his baseline, not 2005.