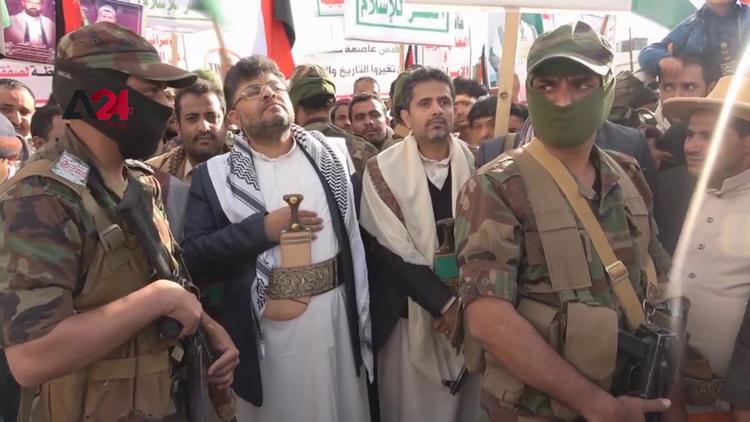 Ann Arbor (Informed Comment) – Iran’s Ayatollah Ali Khamenei, the “august leader” of the country, lambasted the Kushner Plan for the Palestinians, and took the opportunity also to blast the four Arab countries whose representatives attended its announcement. Since Saudi Arabia and the others often play the racist “non-Arab” card against Persian Iran, it must have been delicious for Khamenei to be in a position to denounce his Arab enemies as traitors to the Arab and Muslim cause for being willing to throw the Palestinians under the bus.

The United States is in the midst of an attempt to convince Iraq not to kick out US troops after Trump blew away a major Iraqi military officer, Abu Mahdi al-Muhandis and his colleague, Gen. Qasem Soleimani of Iran at Baghdad Airport.

A complicating factor is the Kushner Apartheid Plan for Palestine, which is as popular in Iraq as a skunk at a New Year’s Eve party. The Iraqi foreign minister, Muhammad Ali al-Hakim, said that his government rejected the Kushner Plan, insisting that “any settlement must guarantee the full rights of the Palestinian people.” He added, “We call on the European Union to play its role in guaranteeing the rights of the Palestinian people in erecting a unified and viable state with its capital in Jerusalem in accordance with the resolutions of international law.”

The Iraqi government, which the US is trying to recover as an ally after assassinating a state official, is actually asking the European Union to intervene against the United States.

The spokesman for Shiite cleric Muqtada al-Sadr, who has call for million-person marches of protest against the presence of US troops in Iraq, dismissed the so-called “deal of the century” as “the slap of the century,” using a play on words in the Arabic.

Lebanon’s Christian president, Michel Aoun, immediately rejected the Trump administration proposal. Lebanon was mauled by Israeli Occupation itself 1982-2000, and then by the massive 2006 Israeli war on little Lebanon, which set back the latter’s economy by decades. Aoun is part of a coalition with the Shiite Hizbullah, which is strongly pro-Iran, so this so-called “deal” gave the pro-Iran faction in Lebanon a lift.

While it is expected that Hizbullah would reject the American deal, it is unpopular among all the country’s political factions.

Again, this is a big win for Iran and an abject defeat for the United States.

Syria, a close ally of Iran, announced its “absolute rejection” of the Kushner Plan, calling it a plan for “surrender to the usurping Israeli occupation.” Syria has recovered most of its territory after a nine-year failed revolution and civil war, and the regime is seeking renewed legitimacy with the majority Sunni population. Being able to take a stand against US imperialism and Israeli occupation and annexation of Arab land is a godsend to the Damascus regime. That Iran, Damascus’s ally, is also a part of the rejection front that stands for the Palestinians helps make up, among some Arabs, for it being a non-Arab state.

The Houthi movement in Sana’a, Yemen, staged large demonstrations against Kushner Plan, demanding rights and justice for the Palestinians. Saudis and the US accuse the Houthis of being “Iran-backed,” but given popular support for the Palestinian cause, that charge looks different in light of the American plan for Apartheid against the Palestinians.

A24: “Yemen | Houthis demonstrate in Sanaa against Trump deal”

The pro-Iran governments in the Middle East are in green in this European Council for Foreign Relations map: 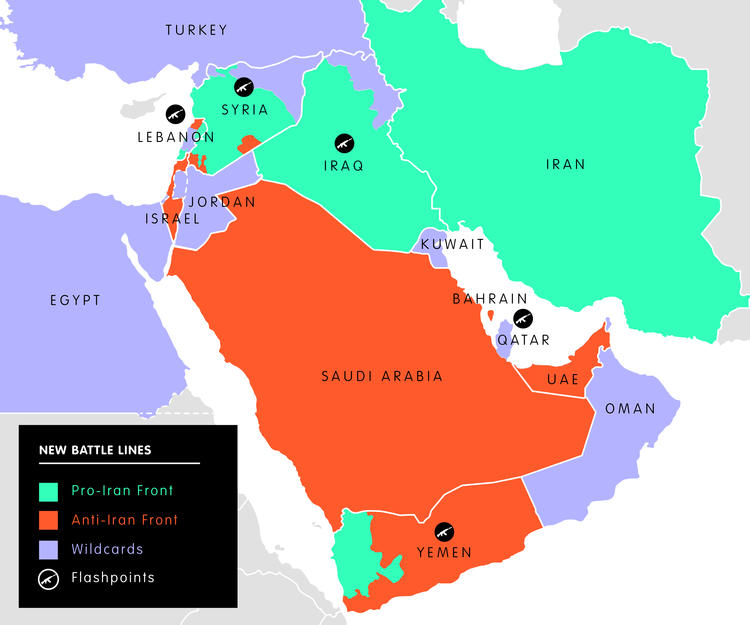 In fact, since Iran stands so forcefully for the Palestinians, and the entire Arab League voted to reject the Kushner Apartheid entirely, this issue was a godsend for Iran in the Middle East generally. It put the Saudis, the United Arab Emirates, and Egypt– all foes of Iran whose populations are very pro-Palestinian, in a very difficult population. As American allies, they look as though they are helping Jared Kushner screw over their own people.