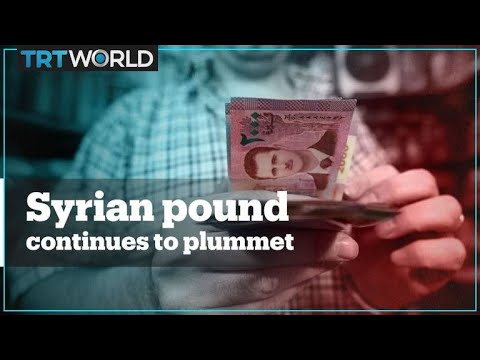 ( Middle East Monitor ) – A devastating civil war and international sanctions have destroyed Syria’s economy, leaving it with a GDP that is a third of what it was in 2010. The monetary crisis and depreciation of the currency is the latest chapter of the country’s economic meltdown. Despite the lack of accurate statistics, some agencies such as the UN Development Programme estimate that 83 per cent of Syrians live below the poverty line and close to 12 million are in immediate need of humanitarian aid.

The conflict has also had a drastic impact on economic activity. According to Chatham House researcher Zaki Mehchy, “By 2018, the total accumulated economic loss was estimated at about $428 billion, which equalled six times Syria’s GDP in 2010.”

The reduction in local purchasing power has hit Syrian citizens who are already facing a lack of basic services, such as access to clean drinking water, electricity, gas and fuel. The Syrian pound has nosedived to an all-time low, from 47 pounds to the US dollar in 2011, to almost 1,200 to the dollar last month.

Most of this can be attributed to the depletion of the country’s foreign currency reserves, which stood at $16 to 18 billion before the war. By supporting the regime’s war efforts, the Syrian Central Bank now has between just $700 million to $1.2 billion of foreign reserves left. This prevents the bank from taking any meaningful action against the falling currency.

READ: Turkey requests US air support as fighting heats up in Idlib

According to Souhail Belhadj-Klaz, a researcher on the transition process in Syria at the Geneva-based Graduate Institute, the country cannot reverse this trend if its regional and international isolation persists or increases. However, despite numerous obstacles, he said that Syria is not yet at the stage of hyperinflation. “This means that inflation in Syria is not out of control, and Lebanon and Russia are still providing stabilising support,” he told me.

Economic turmoil in neighbouring Lebanon, though, means that a vital source of hard currency from Syrians living there has been cut off. Syria’s economy has, in fact, depended on banking ties to Lebanon to keep business and commerce running. Lebanese banks imposed tight controls on hard currency transfers abroad and cash withdrawals, leaving many Syrians unable to access their accounts. The Syrian diaspora has been using Lebanon’s financial system as a conduit for sending funds to their relatives in Syria estimated at hundreds of millions per year. Cutting this off may be an existential blow to many individuals as well as to numerous Syrian importers, with a corresponding effect on the Syrian economy. Lebanon’s crisis has also affected the value of the Syrian pound, which has depreciated rapidly since mid-October when the protests broke out in Beirut and other major cities.

Syria’s President Bashar Al-Assad has taken some emergency steps to try to halt the dramatic fall of the pound. He has banned the use of foreign currencies, for example, and violators face a prison sentence with hard labour.

It is not clear, however, how Assad’s decree would apply to importers, as the government has stopped granting import licences for all but basic commodities. Since the beginning of the civil war, Damascus has become very dependent on external trade partners and almost all import payments are made in foreign currency, which increases the pressure on the Syrian pound.

In order to improve living standards, Assad’s regime announced an increase in monthly salaries for public servants of around $28 dollars last November. Many analysts, though, suggest that the government covered the cost by simply printing more money, further reducing the currency’s value.

In Belhadj-Klaz’s opinion, one of the ways to slow down currency depreciation and the destruction of the Syrian economy is to stabilise conflict at the national and regional levels — with Turkey — as a complete resolution is not possible at the moment, something of which the Syrian authorities are well aware. This would depend only partially on the will and capacity of the Assad regime.

What’s more, in the absence of direct foreign investments and ever-declining exports, the Assad regime’s space to manoeuvre is limited. The regime knows that Western states will not participate in the reconstruction process without a negotiated political transition, leaving Damascus with few options.

Assad has far better chances for negotiating economic support from the Gulf countries, said Belhadj-Klaz. Saudi Arabia and the UAE supported the late President Hafez Al-Assad in terms of grants, loans and investments, enabling the Syrian government to overcome several crises throughout the 70s, 80s, early 90s and later. Indeed, for the past two years, his son Bashar’s regime has been trying to set conditions for the re-establishment of relations with the Gulf States. However, any breakthrough would also require Assad to cut his links with Tehran, a precondition that he is unlikely to accept.

However, support from his fellow Arab regimes, if any at all, may be too late if accumulated economic problems spiral out of control as the recent protests suggest. After a decade of economic and existential despair, citizens of Shahba in Sweida province have lost their patience and gone out onto the streets to express their anger over rising prices, sanctions and the dire economic situation. While the protests have been anything but frequent, such public displays of dissatisfaction could spill over to the rest of the country, as has happened in Iraq, and perhaps lead to another Arab Spring and the overthrow of Assad.

According to Belhadj-Klaz, this is not likely, as the Syrian regime has managed to break up and isolate urban and village communities creating thousands of micro-territorial units with which it has negotiated micro-agreements of “non-aggression” or “support”. Hence, the spillover effect to other parts of the country is not very likely, with large parts of the country still insecure. Furthermore, the demography in Syria is against another popular uprising. As he pointed out, most of the younger generation have either left the country or are internally displaced and struggling for survival. Moreover, there is still no viable political alternative that could replace the current regime.

Nevertheless, Assad may barely survive the civil war. He may have retaken most of Syrian territory, but how long can he survive the economic crisis? Long term currency stability requires a healthy economy and a development strategy that at the moment seems like mission impossible.