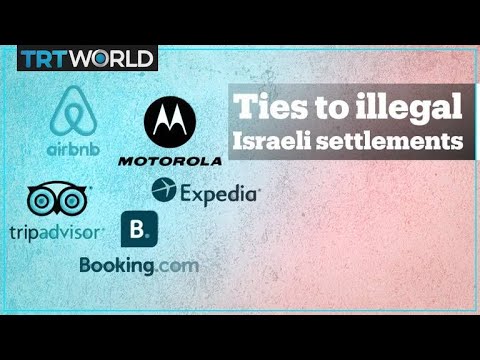 (Middle East Monitor) – An overdue report has finally been published by the UN Human Rights office which lists 112 companies benefiting from illegal Israeli settlements in the occupied West Bank, including East Jerusalem. Almost 100 of the companies are based in Israel, while the rest are from 18 other countries including the US, France, the Netherlands, Luxembourg, Thailand and Britain. Listed are well-known companies such as Booking.com, Expedia, Airbnb, TripAdvisor, tech giant Motorola and consumer food maker General Mills. Construction and infrastructure companies including Britain’s JC Bamford Excavators (JCB) and France’s Egis Rail are among many others.

The database was collected on a mandate by the UN Human Rights Council (UNHRC) in 2016, which was put to a vote at the time by four countries – Malaysia, New Zealand, Venezuela and Senegal — with the US abstaining.

In a prompt response, Israel’s Foreign Minister, Israel Katz, called the move a “shameful surrender” to countries and organisations that want to hurt Israel, elaborating that the UN body has become a partner and tool of the Boycott, Divestment and Sanctions (BDS) movement. This harsh condemnation was followed by a severing of ties with the UNHRC.

Benjamin Netanyahu, meanwhile, was furious and threatened to boycott “whoever boycotts us.” The Israeli Prime Minister slammed the UN list as the work of a biased and uninfluential body: “Instead of dealing with human rights, this body is trying to blacken Israel’s name. We reject any such attempt in the strongest terms and with disgust. Whoever boycotts us will be boycotted.”

The report was published a day after Palestinian Authority President Mahmoud Abbas spoke at the UN Security Council, where he rejected the Donald Trump “peace plan” dubbed the “deal of the century”. The plan was unveiled to the world in Washington a week ago, in the presence of Netanyahu and opposition leader Benny Gantz, but with no Palestinian official in the room.

The long-awaited report was released despite pressure from Israeli companies and US law makers to prevent its publication. They fear that it will encourage the Palestinians to pursue the listed companies through international legal institutions. Such exposure to legal action might have the effect of foreign investors pulling out of Israel altogether.

Israelis regard the report as a stab in the back, and have rejected it completely. Pro-justice and anti-occupation campaigners, however, believe that this is the least that can be done to show solidarity with oppressed Palestinians who have been struggling since 1948 for self-determination and to be able to live as a free nation.

Not surprisingly, the US Senate Committee on Foreign Relations also rejected the report. “This action is only further evidence that the OHCHR, which is supposed to be the lead human rights office in the United Nations, is overly politicised and focusing a disproportionate amount of time and resources on Israel,” said committee head Jim Risch, a Republican from Idaho.

The UN Human Rights office, though, defended its position. “While the settlements as such are regarded as illegal under international law, this report does not provide a legal characterisation of the activities in question, or of business enterprises’ involvement in them,” explained High Commissioner for Human Rights Michele Bachelet.

As far as the Palestinians are concerned, the UN report is a symbolic victory for international law and their own just cause. It’s being viewed as a crucial first step towards restoring faith in international law, according to some PA officials.

Indeed, veteran negotiator Saeb Erekat, who is also the Secretary General of the Palestine Liberation Organisation, the UN list boosts the credibility of the UNHCR in the face of the fierce attacks and intense pressure that the Trump administration places on UN institutions. “While this list does not include all of the companies profiting from Israel’s illegal colonial-settlement enterprise in occupied Palestine,” said Erekat, “it’s a crucial first step to restore hope in multilateralism and international law.”

The Palestinian Foreign Ministry urged the UNHCR member states to study the list and order the companies named to terminate their activities in the illegal settlements. Palestinian Prime Minister Muhammad Shtayyeh vowed to take legal action against the companies, but also proposed that they should consider the possibility of moving their factories and branches to Palestinian cities and villages nearby if they want to rectify the current illegal setup. It was noted that they need to pay compensation for their illegal use of occupied Palestinian land and engaging in economic activity without obeying Palestinian laws and paying taxes to the PA.

“We will pursue the companies listed in the report through international legal bodies and the courts in their own countries for their role in violating human rights,” added Shtayyeh.

According to Human Rights Watch, the database will help companies and firms to end what it termed their “complicity in rights abuses” and “should put all companies on notice” that they cannot ignore international law forever.

All Israeli settlements in the occupied Palestinian territories are illegal under international law, although Israel argues that the settlements are built on “disputed” territory and their status should be finalised through negotiations. In the meantime, though, it continues to violate the law as it stands, as well as UN resolutions and human rights. As part of Netanyahu’s election promises and slogans last April and September he vowed to apply Israeli sovereignty and annex more than 100 settlements in the occupied West Bank. His initial excitement at being given everything that Israel has always wanted by Trump’s deal, was cooled when Washington put pressure on him to put annexation plans on hold until after the 2 March election.

Around 620,000 Israeli settlers live in over 230 illegal settlements and military outposts, roughly 11 per cent of the total Jewish population in historic Palestine. The reality on the ground is that settlements have already been annexed in all but name.

With 600 or so military checkpoints, the Apartheid Wall and the settlements, just 18 per cent of historic Palestine is available for a “Palestinian state”. However, it is made up of disconnected Bantustans, while Israeli settlements are connected by fortified bridges, tunnels and roads for the use of Jews only. Such punitive measures have devastated the Palestinian economy, with Palestinian-owned companies barely allowed to function under Israeli control, and the people of Palestine dependent entirely on the Israeli economy and currency.

That is why the UN Human Rights office report is being seen as a victory by Palestinians, albeit symbolic. No doubt accusations of “anti-Semitism” will be levelled at everyone who tries to boycott the companies profiting from Israel’s illegal occupation. Such accusations should be treated with the contempt they deserve. Now is the time for the Palestinians to benefit from this boost to their cause in what is an entirely asymmetric struggle.

Yousef Alhelou is a Palestinian journalist based in London.