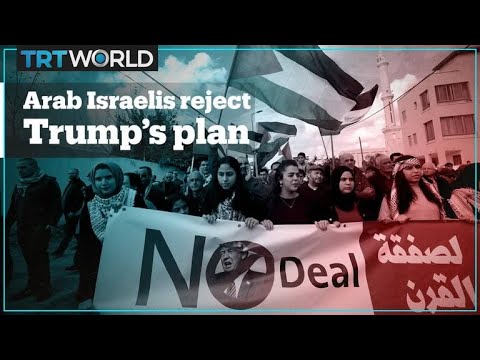 (Middle East Monitor)- Israelis of all political persuasions welcomed the Trump “peace plan”, but the Palestinian citizens of the self-styled Jewish state are angry because the deal refers to land and population swaps between Israel and Palestinian Authority territory. This confirms that Israel wants to displace them, fulfilling right wing aspirations.

Arab members of the Israeli parliament have said that they will not agree to the deal of the century and its explicit annexation proposal. Nevertheless, the right-wing Israeli government now has a green light to strip citizenship from hundreds of thousands of Palestinians living in the “Triangle” in northern Israel.

It is clear that Trump’s plan is not just about taking more of the Palestinian land occupied in 1967, but that it also wants to “transfer” Palestinians from the areas occupied in 1948. Israel wants to “swap” the area with the PA; protests against this are not, therefore, simply in solidarity with the Palestinians in the West Bank and Gaza Strip, and the refugees in the diaspora. There is also a conspiracy against their existence in Israel.

The Palestinians in Israel have held crisis talks about the implications of the deal, especially for those in the Triangle, which is a predominantly Arab area in Israel, near the West Bank, divided into the Northern Triangle and the towns of Kafr Qara, Ar’ara, Baqa Al-Gharbiyye and Umm Al-Fahm, and the Southern Triangle, which includes Qalansawe, Tayibe, Kafr Qasim, Tira, Kafr Bara and Jaljulia. It is a stronghold of the Islamic movement in Israel, led by Sheikh Raed Salah.The part of the Triangle mentioned in the Trump plan covers 350 square kilometres. The area threatened by the swap proposal covers more than 42,000 acres, inhabited by 300,000 Palestinians, who make up 20 per cent of the total Palestinian population inside Israel and have Israeli citizenship. These villages are thus a source of demographic concern for Israel due to the steadily increasing population, which is expected to reach 500,000 in the next five years, tipping the demographic balance in favour of the Palestinian Arabs.

The Triangle is more conservative in nature than the more integrated Arab regions in Israel. Swapping the land and population out of Israel will see the loss of those who best preserve traditional Palestinian identity. Local political groups believe that the land and population swap is an extension of previous efforts by Israel to liquidate the Palestinian issue; Israel wants more land but without the people of Palestine on it. It is not the first time that the Israelis have sought to transfer the largest number of Triangle residents and the least amount of land. Such a move will not only hit the Palestinians directly involved, but also their extended families and social connections, many of which will be severed.

Efforts to Judaise the Triangle areas to provide Israel with some strategic depth have included a belt of settlements on the outskirts of the Arab towns. This has caused anxiety among the Palestinians, with almost daily attacks by settlers against them and their properties. There is also a fear that another massacre like that at Kafr Qasem in 1956 is on the cards in order to make the local population leave of their own accord.

A plan developed by the late Prime Minister Ariel Sharon, called the “Seven Stars” project, tried to change the demographic nature of the Triangle. A Jewish majority was to be created by establishing religious centres, hemming-in Umm Al-Fahm so that it could not be developed further, and linking the area to settlements in the West Bank. This would also have seen the removal of the so-called Green “Armistice” Line of 1949 dividing the Palestinian territories occupied in 1948 from those occupied in 1967. The latter were supposed to form the “State of Palestine” according to the international consensus. Sharon’s project did not get beyond the discussion stage.

It is clear that Israel is seeking to buy enough time to impose a fait accompli on the ground by getting Knesset approval for the deal. Although the Arab MKs have the third largest coalition with 12 seats, their chances of thwarting the vote on the plan are almost non-existent in light of the general agreement within Israel to implement Trump’s plan.

Israelis have declared the Palestinian-Israeli population growth as a “demographic time bomb”. With a falling birth rate among Israeli Jews, the fear is that Palestinians will outnumber them across historic Palestine within the next ten years.

Land swaps to defuse this “threat” to the “Jewishness” of the state of Israel have been mooted before, of course. Post-1967, Israel’s policies in the newly-occupied territories have included the annexation of Jerusalem, still unrecognised by most countries in the world; land confiscation; house demolitions and the removal of residency rights.

In 1982 a secret document called for the Interior Ministry to crack down on the Palestinians and push them to leave their land. This was picked up by the racist General Rehavam Ze’evi in 1988, and notorious Rabbi Meir Kahane, who called for Umm Al-Fahm to be attacked as a means of provoking its residents.

By 2004, former Defence Minister Avigdor Lieberman was proposing the swap of minor Israeli settlements in the West Bank with Arab villages and towns in the Triangle, based on similar agreements made post-World War Two in different parts of the world. Donald Trump’s “peace plan” is in many ways simply a US-endorsed Judaisation project giving Israel everything that it wants, for now. Its aims and objectives mirror those of earlier schemes.

Israeli security agencies are also concerned about the growing influence and activities of the Islamic movement within the “Jewish state”, particularly in the Triangle, as its ideas are similar to those of the Muslim Brotherhood. The movement also mobilises volunteers against Israeli violations at Al-Aqsa Mosque. The fear is that the conflict will spill over into serious clashes between Palestinian Muslims and religious Jews.

The timing of the release of the deal of the century helped Benjamin Netanyahu, who faces yet another general election next month — the third in less than a year — as well as indictments for corruption. The deal is a bit of a lifeline for the Israeli Prime Minister. Nevertheless, approval and implementation of its terms may be postponed until after the election, giving the Arab MKs time to try to prevent the displacement of citizens from the Triangle.

Palestinians within Israel believe that the Trump “peace plan” is anything but peaceful, and will lead to violence. In fulfilling the aims and aspirations of the Israeli far-right, it looks set to entrench even further Israel’s status as an apartheid state, with the indigenous people facing ever more discriminatory legislation and displacement. It remains to be seen if they can prevent the implementation of the plan, at least the land swap clause, which seeks to rob so many people of their citizenship and transfer them against their will.