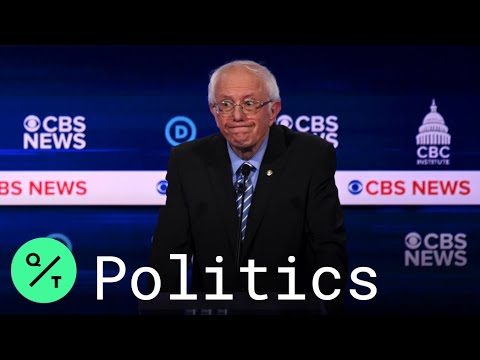 At Tuesday night’s Democratic debate in South Carolina on CBS, Major Garrett, chief Washington correspondent for CBS News, asked Bernie Sanders a leading question. The question assumes that American Jews are a one-issue constituency who only care about Israel, and, indeed, it assumes that American Jews support the Netanyahu government. According to Gallup, about a quarter of America Jews say they are not emotionally connected to Israel, and only half think supporting Israel is essential to Jewish identity.

Moreover, even American Jews who care deeply about Israel are often worried about where the country’s far right is taking it. Some 42 percent of American Jews say Trump is too favorable to Israel, and more Jews feel that way than Christians. I suspect this means that they think Israeli prime minister Netanyahu needs to be reined in, and Trump is instead giving him so much rope he may hang the country. American Jews heavily vote democratic (78% supported Democrats in 2018), and are naturally torn by Netanyahu’s over-the-top support for Trump and the GOP.

“an AIPAC petition linked to their ads designed to mobilize supporters stated, ‘It’s critical that we protect our Israeli allies especially as they face threats from Iran, Hamas, Hezbollah, ISIS and – maybe more sinister – right here in the U.S. Congress.’ This is not a call to action, it is incitement. Elected representatives in Congress “more sinister” than ISIS? Last year, I met with AIPAC representatives from Minnesota in my office. Do forces ‘more sinister’ than ISIS sit down and meet with AIPAC’s advocates?”

Not only that, but Palestinian critics charge that AIPAC regularly lends its podiums to politicians like Netanyahu who deploy racist language against Palestinians. Garrett in his question ignored the organization’s comparison of some Democrats to ISIL, and the racism.

So here is the exchange:

“GARRETT: Senator Sanders — no, Senator Sanders, I have a question for you, sir. You’re the frontrunner in this race. You’re on the ballot in South Carolina. Mayor Bloomberg, you’ll understand that preamble in just a second.

If elected, Senator Sanders, you would be America’s first Jewish president. You recently called a very prominent, well-known American Israel lobby a platform for, quote, “bigotry.” What would you say to American Jews who might be concerned you’re not, from their perspective, supportive enough of Israel? And specifically, sir, would you move the U.S. embassy back to Tel Aviv?

SANDERS: Let me just — the answer is, it’s something that we would take into consideration.

SANDERS: But here — excuse me. But here is the point. I am very proud of being Jewish. I actually lived in Israel for some months. But what I happen to believe is that, right now, sadly, tragically, in Israel, through Bibi Netanyahu, you have a reactionary racist who is now running that country.

We have got to have a policy that reaches out to the Palestinians and the Americans. And in answer to your question, that will come within the context of bringing nations together in the Mideast.”

Bernie Sanders is one of a very few US politicians who will call Binyamin Netanyahu what he is, a reactionary racist. And he is one of very few who will admit the suffering of the Palestinian people, whom Israel has kept stateless and without basic rights and either under blockade or under military rule for decades.

Sanders’ forthrightness and honesty can be contrasted with Mike Bloomberg:

“GARRETT: Mayor Bloomberg, would you like to weigh in on that, please?

BLOOMBERG: Well, the battle has been going on for a long time in the Middle East, whether it’s the Arabs versus the Persians, the Shias versus the Sunnis, the Jews in Israel and the Palestinians, it’s only gone on for 40 or 50 years.

Number one, you can’t move the embassy back. We should not have done it without getting something from the Israeli government. But it was done, and you’re going to have to leave it there.

Number two, only solution here is a two-state solution. The Palestinians have to be accommodated. The real problem here is you have two groups of people, both who think God gave them the same piece of land. And the answer is to obviously split it up, leave the Israeli borders where they are, try to push them to pull back some of those extra over the — on the other side of the wall, where they’ve built these new communities, which they should not have done that, pull it back.

Bloomberg’s answer makes a person’s head hurt. He began with the Orientalist canard about the Middle East being wracked by age-old hatreds. It is a form of “whataboutism” to excuse Israeli colonization and brutality. He is saying the issues is not Israeli theft of land and resources or Apartheid, but flawed Middle Eastern character.

Shiites and Sunnis haven’t been fighting continuously for centuries. In fact, from the rise of the Qajar rule in Shiite Iran in 1789 until its fall in 1925, there was only one short war with the Sunni Ottoman Empire, in 1821-23. Otherwise you had about 130 years of peace. Likewise the Pahlevi dyanasty, 1926-1979, had excellent relations with Sunni-majority Turkey, and in the 1959 Iran joined Turkey, Pakistan, and the UK in the Central Treaty Organization (CENTO) against Soviet influence. Turkey and Pakistan are Sunni majority, Iran is largely Shiite. They were actually military allies.

Even the Iran-Iraq War of 1980-1988 is not properly seen as Sunnis versus Shiites. Although Iraq was Sunni-ruled it was actually ruled by secular Arab nationalists, and a big majority of the Iraqi Army was Shiite. Only 40,000 Iraqi Shiites defected to Iran during this war.

Sunni-Shiite struggles heated up when George W. Bush invaded Iraq and created power vacuums. But Bloomberg is just wrong about the history.

The struggle between Palestinians and European Jews intent on colonizing Palestine goes back to the late 1920s at least, with regard to the history of violence. Not sure how Bloomberg traces it back only to 1980 or 1970. That struggle is rooted in British and American colonialism and neo-colonialism and in the rise of a new sort of Jewish nationalism called Zionism.

Until the 1940s when the intentions of the Zionist movement became abundantly clear, Jewish communities had fair relations with Arab and Muslim neighbors. Baghdad was one third Jewish, and the Jewish community was genrally well off and well regarded. Jews were among the first Iraqi writers of the short story. The Moroccan king under Vichy rule protested Nazi designs on his Jewish subjects, and a council of Algerian Muslim clerics likewise stood up for Algerian Jews against the Vichy. Relations between eastern Jews and their neighbors had their ups and downs, and it was no fun to be a minority, but it was only modern Zionism, the Israel project, and its alliance with British and US colonialism that led to pogroms and the expulsion of most Jews from most of the Arab world (Morocco and Tunisia still have small Jewish populations).

Bloomberg declares the moving of the US embassy to Jerusalem irrevocable, when in fact the US can put its embassy where it wants and does not have to bless Netanyahu’s illegal annexation of the occupied Palestinian east of the city.

And then he says mealy-mouthed things about a fabulous unicorn of a two-state solution, which is no longer in the least plausible, and in the coffin of which Netanyahu is even now pounding the last nails.

It is clear that Bloomberg is more or less blessing Netanyahu’s annexationism and racist Apartheid, inasmuch as he won’t take an open stance against it.

It is clear, between the two, who the visionary is.